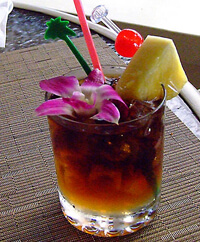 The Mai Tai is a brilliant invention.  Whoever invented it wanted the drink to be exciting at the first sip, tasty throughout the drink, and still good-tasting near the end of the drink when the ice had begun to melt.  The first exciting sip was provided with a float of rum, preferably an aged, higher-proof rum that immediately wakes up the taste buds.  The flavors are blended to provide many layers of taste.  It’s almost as if the main drink is the “chaser” for the rum float, and the last sip is the palate-clearer to take away any lingering sugary taste.  Moreover, the Mai Tai can be personalized to the individual drinker — more, less, or no rum float; more, less or no cherry juice; and a variety of garnishes for those who want the idea of tropical fruit.

Don the Beachcomber may have invented the Mai Tai in 1933 — at least, there is a recipe so labeled circulating.  However, Trader Vic Bergeron mixed several versions of the Mai Tai, at least since the early 1940s, and some give him the primary credit.  It seems clear that both of these folks were gifted mixologists who could copy each other’s drinks without even knowing the ingredients.   One of them would make the first of a drink (Mai Tai, Zombie, Scorpion, Missionary’s Downfall, etc) and the other would taste it and invent something that tasted like it.

Today, advocates of Don and Vic each maintain that their hero did it first.

It’s hard to know what recipes were used, because both men tried to hide the recipes.  Don in particular ordered mixers from several different suppliers and when they arrived, created blends that were then put into numbered bottles for use by the bartenders.  The bartender would know that a Mai Tai required a jigger of bottle #12, but would not know what was in that bottle.

Something distinctive about the Mai Tai as rendered by these two giants of rum drinks — and by almost no one else nowadays — the absence of orange, pineapple or any other kind of fruit juice.  In contrast, there are lots of Tommy Bahama Mai Tai recipes, but all the ones I have seen have either or both juices.

Another difference in the older recipes is that they are not as sweet as modern interpretations.  For me, Don’s 1933 Mai Tai is the least sugary-tasting of all, and I prefer it.  Vic’s Old Way 1972 comes next, and Tommy is far off in sugarland.

The historic recipes which are claimed to be authentic always call for specific rare rums.  Now perhaps a rum specialist could tell the difference, but I maintain that when you take a smooth, distinctive, flavorful liquor and mix it with a bunch of fruity flavors and sugar, whatever elegance was provided by the rum is hidden if not completely completely canceled.

The Mai Tai calls for a double old fashioned glass.  If you use a cocktail shaker, you will be making enough for one or two persons.  Use ice cubes in the shaker, shake until the shaker is frosted on the outside, then strain into a glass that has a few more ice cubes.  Then add cherry, optional cherry juice and an optional dark rum float.

When you have a large group, which means more than two people drinking, you need to make a pitcher of Mai Tais.  Don’t add ice to the pitcher because it will melt and spoil the mix.  To avoid having to shake every drink, use crushed ice in the glasses instead of cubes.  This will rapidly chill the drink and gives a close approximation to the shaken drink.  The approximation seems perfect when you drink the second drink.  If you drink the third drink you will not be observing much at all.

What do you think about the Mai Tai?  Is it something special, or do you have another favorite in the cocktail Olympics?