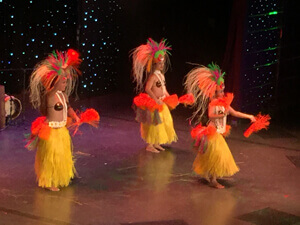 This three-part blog is written for a newcomer visiting Hawaii for the first time. It won’t be much use to a repeat visitor – but hey, everyone’s a newbie at least once. To reward my readers I’ll slip in a few anecdotes and facts as we go.

This first installment (Visiting Hawaii) gives an overview of the Hawaiian islands for the newcomer. The second blog (Best Hawaiian Islands) discusses the four main islands – how they differ, and what they offer the visitor. The last installment (Best Hawaii Lodging) gives guidance on lodging, local transportation and tours to help ensure the finest vacation experience.

Whether your goal is Pearl Harbor, a Maui vacation or Volcano country, you’ll find helpful guidance in this group of articles.

What about getting from home to Hawaii in the first place? Later in this blog we’ll list the five Hawaiian airports that have the best service from mainland U.S. Once you know those airports, you can book flights as you would for any vacation trip.

As regular visitors know, the beauties of Hawaii go far beyond tourist offerings. There are traditions such as hula, slack key guitar, blowing the pū (conch shell) and luaus. There are humpback whales, dolphins, tropical fish and rich coral reefs. There’s surfing, paddleboarding, bodyboarding, parasailing, snorkeling and scuba. There are lush forests, nature trails and hikes of all kinds.

Hawaii also embraces extremes of experience: You can greet the dawn on a mountaintop and lounge the afternoon away on a pristine sandy beach. You can find treasures at flea markets and at art galleries. You can visit the “seven sacred pools1” of Hana on foot, or soar above them on a helicopter tour.

Yes, all these activities are available to the tourist, but they shouldn’t be snubbed merely because they are designed for the visitor. They offer an easily accessible way to sample what would otherwise be an avalanche of Too Much Information.

Let’s jump into your next vacation, shall we?

Visiting Hawaii as the California Dream 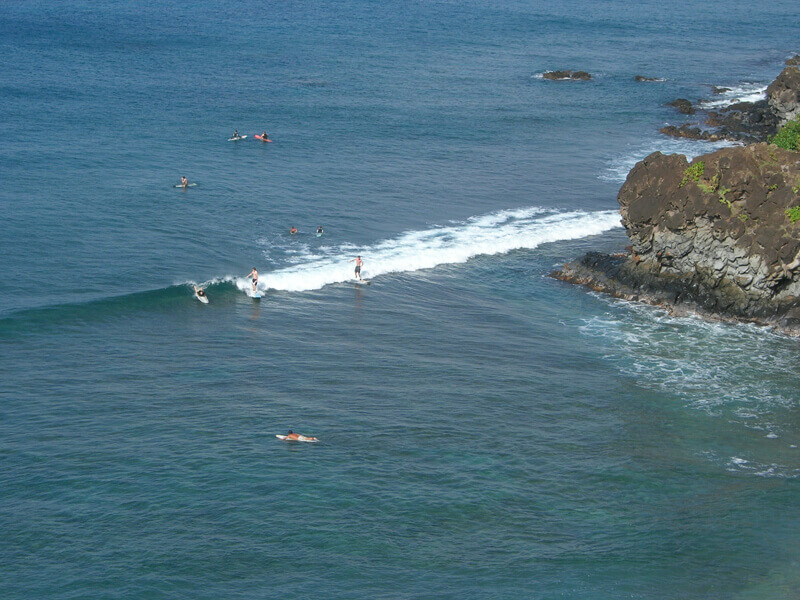 Hawaii has as long a history with me as the state where I spent most of my life. From the day I first moved to Southern California, Hawaii was a constant presence. Where did that come from?

Did it arise from the elegant and ubiquitous palm trees, planted by real estate developers as a cheap way to market California as a tropical paradise? Perhaps from the media’s invention of Hawaii as flower-filled islands where Elvis Presley rode his surfboard and Hawaii Five-0 showed off their Aloha shirts? Or was it caused by airline fare wars that put an irresistibly low price on island romance?

However it came about, everyone I met in California had either been to Hawaii or was longing to go to Hawaii. Whether or not a vacation “short list” embraced skiing at Mammoth or golf in Palm Springs, it always included Hawaii. As soon as time and money permitted, I too became an Aloha convert.

Perhaps because of this background, it always surprises me when I run into someone who has never been to Hawaii. Friends regularly ask me about visiting Hawaii, as some of my New England cousins recently did. After I replied to their request, the answer seemed worthy of a broader audience.

Hence this blog on Visiting Hawaii.

Visiting Hawaii, like any wonderful trip, benefits from early planning. Not only can you make better choices, but you can enjoy weeks and months of anticipation while you endure or enjoy envious grumbles from friends and family.

What if we ask our favorite apps for advice? “Visiting Hawaii” is a poorly framed query, one unlikely to extract wisdom from Siri or Alexa. However, the breadth of possible responses is also the magic key to the answer: because once visitors get to Hawaii, they cannot avoid having a good time. Therefore a discussion of visiting Hawaii needs mainly to deal with the logical mechanics, then offer just a hint at the variety of optional activities. 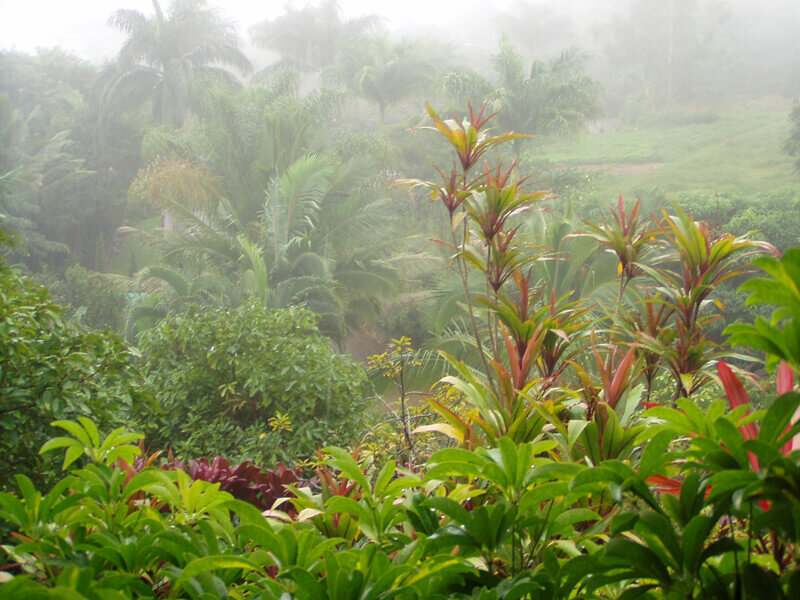 The first and biggest question will be how much time to spend visiting Hawaii. Unless you live in Hawaii (in which case, you’re not visiting Hawaii), it’s expensive and time-consuming to get there. Therefore, it’s best to amortize your investment and relieve your jet lag by staying as long as you can.

When I was working in California, I found it difficult to take more than a week off. However, that worked well enough. Hawaii was as close as the East Coast but a lot more fun to travel to. Instead of my usual business trip to D.C., if I boarded a plane to Hawaii the flight attendant handed me a mai tai as soon as I sat down! My standard became an eight-day trip, usually four days each on two islands.

For a visitor from the Eastern time zone, I consider two weeks a more desirable minimum for visiting Hawaii. Of course, as retirees Nola and I have “all the time in the world” so we generally take six weeks.

So Many Islands, So Little Time 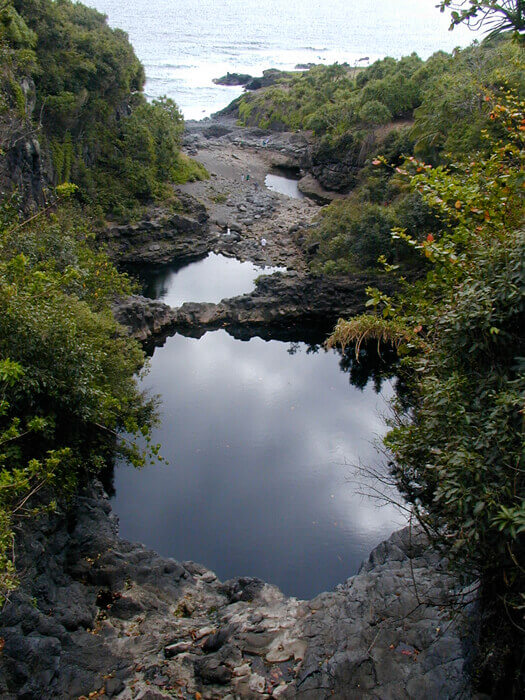 The “sacred pools” of Hana, Maui

If you’ve heard that Hawaii has a hundred and fifty islands, you can ignore that fact. There are only six islands with scheduled airline service. If you want the additional convenience of efficient connections from the mainland U.S., you are limited to five airports on four islands. These islands, airports and airport codes are Oahu (Honolulu HNL), Maui (Kahului OGG), Hawaii Island (referred to as the Big Island – Kona KOA and Hilo ITO) and Kauai (Lihue LIH).

[Note: in this blog I’ll use the English versions of Hawaiian names, in most cases omitting the ‘okina (Hawaiian apostrophe) and the kahakō (macron, to indicate longer vowels). However, for the island of Lana’i I’ll include the apostrophe to distinguish it from the word lanai meaning porch or veranda.]

One or Two Islands May Be Enough

Once you’re on one island, it is costly and inconvenient to visit any other island. Unless you plan to take a seven-day cruise to sample four islands, most travelers first visiting Hawaii find it best to limit themselves to one or at most two islands.

Some vacationers don’t care how others choose to spend their time. But most folks visiting Hawaii for the first time want to know what other people do – either to benefit from their decisions, or sometimes to do something entirely different.

Hawaii does a great job of reporting data about people visiting Hawaii. The data comes mostly from questionnaires filled out by arriving travelers. The visitor research reports from Hawaii’s Department of Business, Economic Development and Tourism contain over a hundred Excel tables, each with hundreds of factoids. Here’s an extract from the most recent report (2015) that seems most relevant for those first visiting Hawaii:

What the Numbers Mean

What can we learn from this mass of numbers?

First, of all nonresidents visiting Hawaii, 50% came to Honolulu, on the island of Oahu. Of five million people visiting Oahu, 76% visited no other island. Differently stated, of the visitors who traveled to only one Hawaiian island, the largest portion – 58% – visited only Oahu. Oahu is obviously the big draw among all the islands.

Next in line in popularity is a Maui vacation. Maui receives half as many arrivals as Oahu, and 63% of people who visit there do not bother to visit any other island.

Hawai’i Island, most commonly called the Big Island, vies with Kauai for the #3 position. Hawai’i gets more total visits, but that may be due to its having two hub airports rather than Kauai’s one. The other two islands with commercial air service, Molokai and Lana’i, together count for only 1% of all visits to the state of Hawaii.

One bit of data not in the table above: of the 8.6 million visitors to Hawaii in 2015, 82% visited only a single island. These folks knew what they wanted, went right there, and focused their attention. But what about the other 1.6 million visitors, for whom one island was not enough?

Pearls on a Necklace 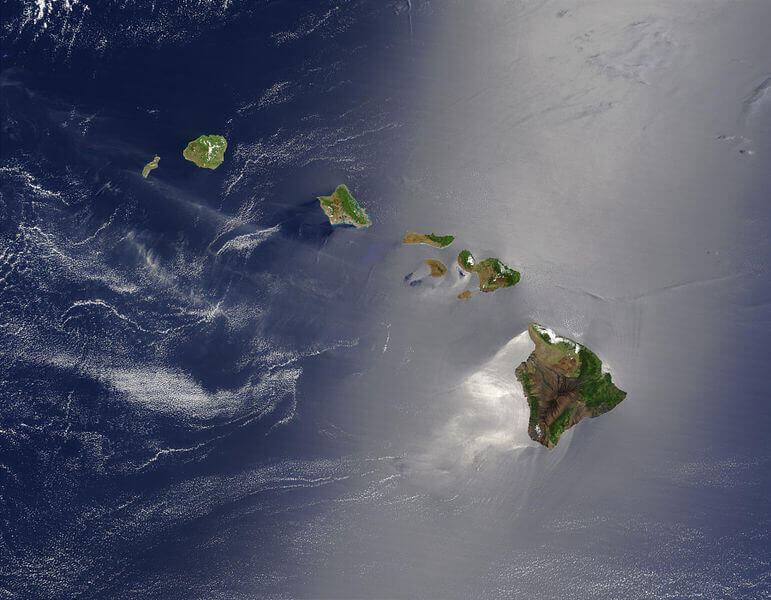 We need one more bit of prep before homing in on a vacation plan. To understand Hawaii as a destination it’s helpful to know where the islands came from.

A glance at the map shows the major islands Kauai, Oahu, Maui and the Big Island strung out like pearls on a necklace, over an arc of Pacific Ocean extending 350 miles from northwest to southeast. The islands were formed, one by one, by volcanic eruptions as the Pacific tectonic plate moved to the northwest over the Hawaii volcanic hotspot2.

The oldest of these islands, Kauai, is six million years old. Next oldest is Oahu, formed between 2 and 4 million years ago; it has not had any active lava flow for perhaps 100,000 years. Continuing to the southeast, Maui is younger, under 2 million years old; its last hot lava was in 1790 and remnants of that flow are still visible. The Big Island is the baby, just one million years old, with active volcanoes that are slowly adding to its southeast coastline. Twenty miles offshore and not yet visible is Lō’ihi Seamount, an underwater volcano that will emerge from the ocean to become an additional Hawaiian island in a mere 100,000 years or so.

From Lava to Lush Island Destination

Although each of the islands started as a lump of hot lava, they’ve been busily evolving since then. Congealed lava is eroded into small particles by rain and wind. Its further evolution into soil requires a buildup of organic material.

The northeast part of each Hawaiian island is the windward side and receives the most rain. This rain not only weathers the lava, it nourishes windborne bacteria, seeds and spores. Ferns and ohia trees3 are first to establish themselves, followed by animals and other plants as the ground cover builds up.

Based on the relative ages of the islands, we can expect that as we progress from Kauai to Oahu, Maui and then the Big Island, each island will be more rugged, less weathered and less lush with vegetation. Moreover, within each island the northeast part will be wettest with the densest vegetation, while the southwest part will be drier.

Despite these general trends, you will find that each island has a great variety of terrain that sustains rich plant and animal life.

Where We Are, and Where We’re Going

This completes our top-level look at the Hawaiian islands for the vacationer. At this point, a reader thinking of a visit probably has a tentative idea of how long to spend and how many islands to try to embrace on the first trip.

In the next blog (Best Hawaiian Islands) we’ll examine the four main islands in depth, to allow a reader to choose which islands to visit. In the final installment (Best Hawaii Lodging) we’ll address other details needed for a happy trip.

I invite your comments on visiting Hawaii, to help improve this blog for a vacationer!