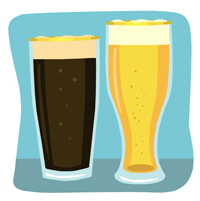 I can imagine the questions that might be posed:
– Did my tax dollars pay for that?
– Is that the most important thing scientists have to work on?
– Can I get paid to help the researchers as a tester?

The lucky scientists who get to answer these questions work for the Health Institute at Griffith University in Queensland. They were concerned with “tradies”, that is, Australians who work at skilled trades such as construction, electrical, plumbing and heating. These folks work in the heat, sweat a lot, then knock off work and toss down some pints. But the sweat dehydrates them, the beer causes them to pee which dehydrates them more, and the result can be a multitude of health problems. So the researchers added electrolytes to beer (think Gatorade) and found there was less dehydration. This is not the first time electrolytes were added to beer (one was called Hop N Gator) but apparently the science part is new.

The newsworthy headline came when someone pointed out that dehydration is a major cause of hangovers: ergo, keep hydrated and have less of a hangover. Unanswered is the question, well, why not just replace your body salts some other way as you drink — e.g. eat salted peanuts as you sit at the bar?

Science Speculation: Reading this story reminded me of the cruise Nola and I took last fall, a lovely long cruise circling the Australian continent, with stops just about everywhere but Ayres Rock (which of course is landlocked). There were many folks from Oz on the boat, and many stories that revolved around beer. One man told the tale of a four-day cruise out of Sydney around Christmastime that was almost 100% booked by Australians and as a result the ship RAN OUT OF BEER.

The Aussies described this debacle as such an unforgiveable sin that I wondered whether Australians really do drink that much beer. Fortunately, the World Health Organization, which studies substance abuse, has many of the answers.  Just choosing 9 large and/or Anglophonic countries for comparison, I show below the relative amounts of type of alcohol consumed, and the total quantity per year per capita, both in pure alcohol equivalent.

From the table, I conclude that if the Aussies seem to identify themselves as a beer-centric nation, it’s more a reflection of popular culture and tradition than based in facts.  Many countries outdo them in proportion of beer drunk — look at Mexico!  And if you look at the last column, the amount of alcohol per year consumed in the form of beer (the product of the percentage of beer and total alcohol), you see that the Aussies are not only put to shame by Germany, but edged out by the USA, and Canada is nipping at their heels.

The health effects of alcohol? Well, that’s another story entirely. But let me point out that in the course of adding the electrolytes to the beer, the researchers also reduced the alcohol percentage from 4.8% to 2.3%, which caused the bloggers to cry out, “Well, dumbhead, of course you don’t get a hangover if you drink beer with nothin’ in it!” So the proposed no-hangover beer may be healthier for you in more ways than one.

Is there a market or a societal need for a no-hangover beer? Or is this an instance of scientific research running off the rails of common sense?