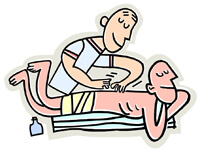 Science Fact: Applied Kinesiology is a chiropractic technique denounced by scientists but which helps many people. It uses “muscle testing” to help the D.C. or D.O. figure out what to do, to make your pain go away. And it’s an example of the tension between what’s good science, and what’s good for the human being.

It’s easy to find scientists debunking Applied Kinesiology, and just as easy to find chiropractors and patients who believe that it really helps people. You can read Wikipedia for a very negative assessment but if you consult the Wikipedia “Talk” page, in which the editors wrangle about the write-up, you’ll see another side to the story, including a perceptive comment about bias in the Wikipedia article (“the use of punctuation as a method to maintain a tone of opinionated skepticism”).

Personal History: The arguments back and forth are technical and, I think, boring. So let me instead talk about my personal experience with this stuff, then offer some ideas of how to think about this nonscientific twaddle that nevertheless seems to work.

I have suffered occasional back or neck pain ever since a ski accident in the 1970s. After consulting a back expert at UCLA Medical (who was ready to knock me out and fuse my spine in the first office visit!) I tried chiropractic and found that, for me, it worked. Every year or two I knock something out of place, usually being careless about wrestling luggage when traveling, and one or two visits to the D.C. puts me back to normal.

I would never promote chiropractic as a cure-all: for example, when my wife Nola encounters pain, she finds that acupuncture is much more effective than chiropractic; whereas acupuncture simply puts me to sleep. But I digress.

My D.C. in Pacific Palisades, Bruce Beddoe, used muscle testing very effectively as one of the ways he determined which parts of me to adjust. When I moved to Grosse Pointe, he said, why, that’s where Dr. George Goodheart practices! Huh? I said. It turns out that the family of techniques called Applied Kinesiology, of which muscle testing is an important part, were invented and developed by Dr. Goodheart beginning in the 1960s. And sure enough, there are professional societies and certifications galore (ICAK, ICAKA, ICAK-USA), despite all the scientists who say that it “doesn’t work”.

Science Speculation: The advocates of Applied Kinesiology have a clear mental picture of why it works. It has to do with the way our body is wired together, particularly the way nerve, muscles and joints interact. These ideas may sound goosey to physiologists, but I personally find it easier to wrap my head around them than the chakras, meridians and qi of Eastern medicine.

How to think about it: Science does not have all the answers, and sometimes science is actually misleading. The procedures of science — theory, hypothesis, experiment, replication — are an excellent framework, but sometimes the framework fails. Examples abound: for example, Dr. Ignaz Semmelweis, who pioneered the idea that doctors should wash their hands before delivering babies. The scientific and medical community rejected his ideas, partly because of hubris and partly because Semmelweis could offer no theory as to why his mothers had a much lower incidence of puerperal fever after giving birth. Only after the later work of Louis Pasteur on germs was it recognized that Semmelweis had saved the lives of many mothers with his revolutionary ideas about washing the hands.

The human body is still in many ways a mystery — just ask the legions of medical researchers who would be out of work if we suddenly knew it all. And issues like pain and health are important to us right now — sometimes we can’t wait for science to find the answers, especially in “fringe” areas where science sometimes has blinders on.

Yes, you can hurt yourself with purgatives, and you can even shorten your life by abandoning tested treatments — consider Steve Jobs. But if you use your head, you can try a lot of stuff with good conscience. You’re not blindly embracing antiscience — rather, you’re returning to the basics of the scientific method, performing an experiment with an open mind and following wherever it may lead.

Have your body treatments included Applied Kinesiology? More generally, do you accept any alternative modalities in your life?