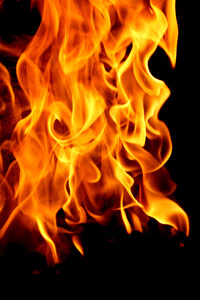 Science Fact:  Tesla fire: on Tuesday last week near Seattle, a Tesla Model S electric vehicle driving on a state highway ran over some metal debris and damaged its lithium-ion battery pack. The driver stopped and evacuated safely before the car burst into flame.

Car batteries have caught fire before during testing, but the Tesla fire is only the second report of a fire following a crash. I’m not an expert in lithium-ion batteries, which are a complicated subject. However, as a scientist and an enthusiastic owner of a GM Volt, I felt that this event called for a comment. After all, people want to know, am I risking my life to ride a car with one of these batteries? For that matter, how about an aircraft?

The following table compares the battery packs of three electric vehicles – a Tesla of the type that caught fire, the LEAF full electric and the Volt hybrid.

Several things pop out in this table:
– The Tesla is carrying around a lot more electrical energy – 3.5 to 5 times – than these other vehicles
– The Tesla is packing more energy per pound into its battery, which probably means their battery technology is pushing closer to its limits
– And the Tesla allows 8 times faster charging of a much larger battery; this may mean thinner components, or more experimental materials, which again suggests technology being pushed close to the limits

The Tesla is a $70,000-plus car that advertises a top speed over 120 mph. That type of car is likely to be pushed harder, and driven faster, than a car advertised primarily for its low operating costs (“never buy gas”). When you add that to the comparisons above, it’s not surprising that if an electric vehicle is ever going to burst into flame, a Tesla fire might be more likely than some others.

Science Speculation:  But let’s examine the “if” in that last sentence. Just how much energy are we talking about, anyway?

Consider the Ford Escape, the all-gasoline version, which according to Edmunds.com is one of the four most popular SUVs. Its gas tank holds 15.1 gallons, which is a typical size for many cars.

Gasoline has chemical energy of about 36 megajoules per liter. When you convert the units (a megajoule equals 0.28 kilowatt-hour, a liter is 0.264 US gallons), the Escape is carrying around 576 kilowatt-hours of chemical energy. In other words, 7 times as much as that fiery-hot Tesla!

What’s the difference? An expert could list many fundamental differences in the technologies. But I say, we’ve had more than 100 years to improve the design and manufacturing of cars to the extent that we consider them safe to drive, even at high speeds. Today’s electric vehicles have been so carefully engineered that overall, I believe they are just as safe as gasoline vehicles. And 100 years from now, people will wonder what the fuss was about.

The Tesla fire is scary news, but so far a unique event. Does the appeal of never buying gas overcome your concern about the risk of new technology?