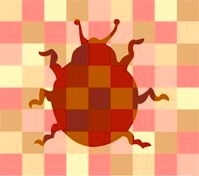 Science Fact:  The headline Invasion of the Nostril Ticks was irresistible. What would you do?  Naturally, I had to share it.

Tony Goldberg went to Uganda to study disease transmission in chimpanzees, and from chimps to humans.  When he reached home his nose itched. Sure enough, he was carrying a stowaway, a nostril tick that normally lives in chimps, but which apparently found him to be tasty enough. Chimps are fastidious about grooming, so a tick that’s going to survive has to live somewhere that chimps can’t easily reach it. You can see a colorful photo of Tony’s tick HERE.

The team of epidemiologists was taking close-up photos of the chimps, looking up their noses for, you guessed it, ticks. And if a tick can jump between chimps, apparently it can also jump to a human who is busy focusing his macro lens at the moment.

This is not a common complaint: there appear to be only two earlier scientific reports of nostril ticks in humans, in 1960 and 2008. Goldberg’s report made the news because he was back in his lab when he discovered the tick, so he was able to preserve it and sequence its DNA for study.

Science Speculation:  Gary Aronsen, one of the previous researchers, gave the quote of the day: “It’s fun to welcome Tony to that small, elite club of publishers on ticks in the nose.”

Beware of nostril ticks if you visit Africa! Are you packing your bags?

The news story:
Specimen plucked from a scientist’s nose may represent a new species

The journal article:
Coincident Tick Infestations in the Nostrils of Wild Chimpanzees and a Human in Uganda