Science Fact: Hawaiian sea burial is a heart-felt and respectful tradition not only for native Hawaiians, but sometimes for Mainland visitors as well.

The condo that Nola and I own is at Honokeana Cove in West Maui. Last month while on a Maui vacation I attended a sea burial on nearby Napili Bay Beach for Fetta Luebke, who was for many years the head of our condominium association’s housekeeping service. As a result, this post is a tribute to Fetta, whose memorial service and sea burial typifies the beauty and emotion of this custom.

1.  The family prepares the outrigger canoe. 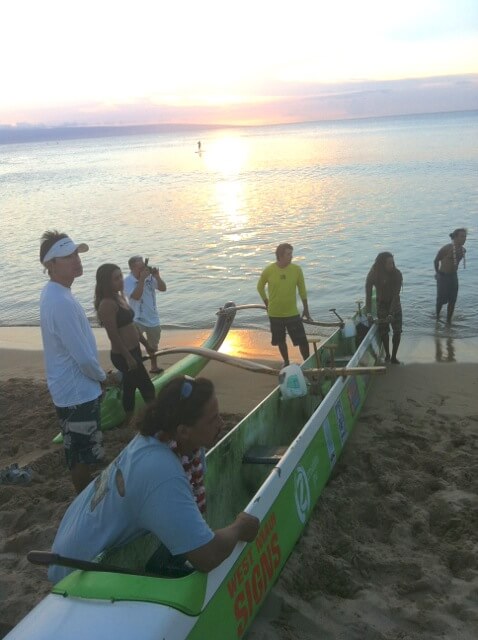 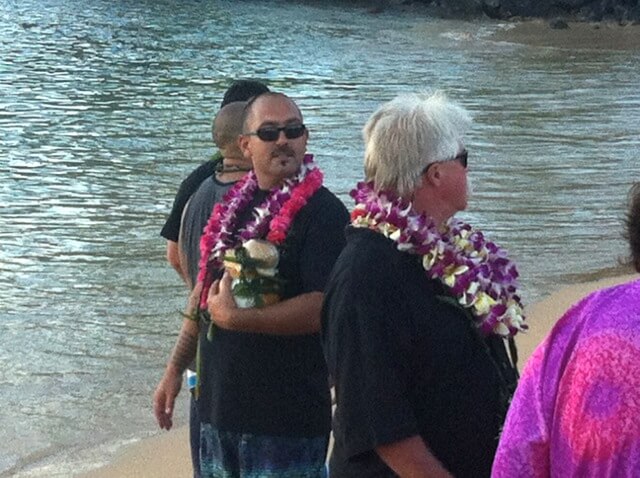 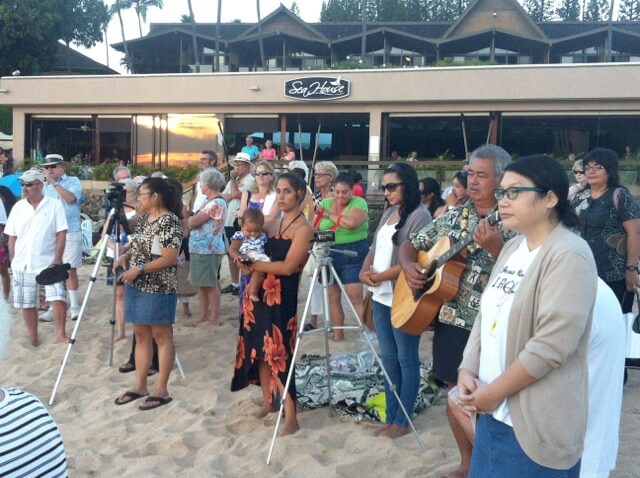 4.  Fetta’s son Scot speaks of her joy of life as his sisters look on. 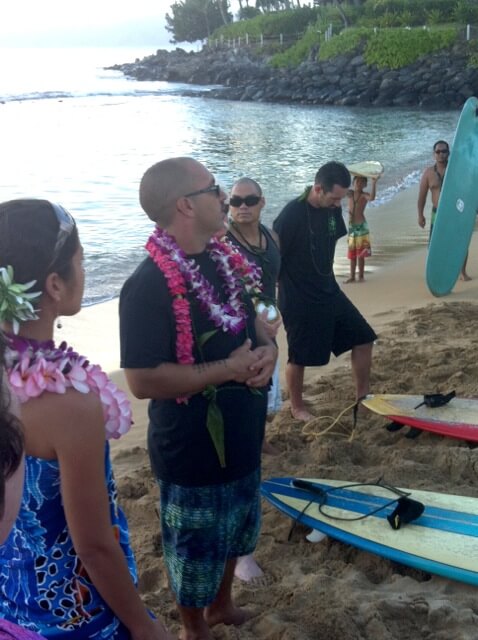 5.  Scot and some other relatives will paddle out on these surfboards. 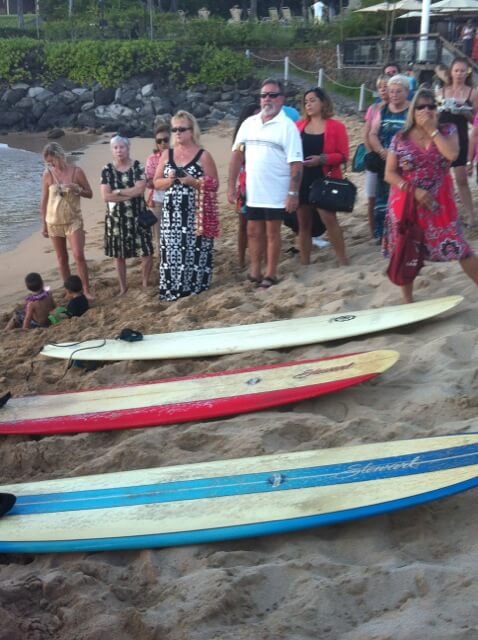 6.  Family members who don’t plan to ride surfboards board the outrigger canoe. Fetta’s husband sits in the center carrying a gourd holding her ashes. 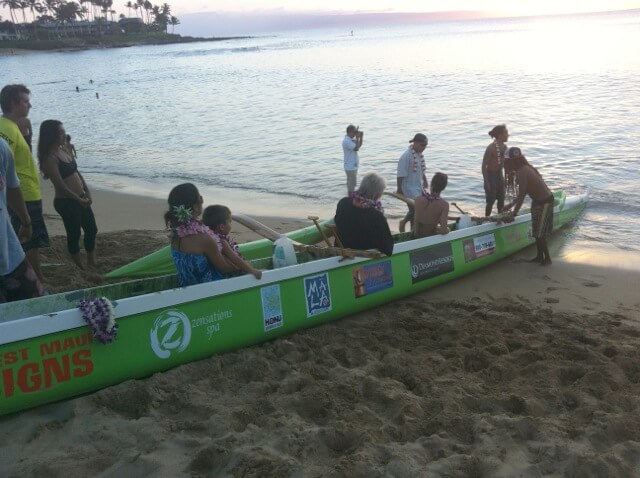 7.  The burial party – outrigger canoe and surfboards – heads out to sea. 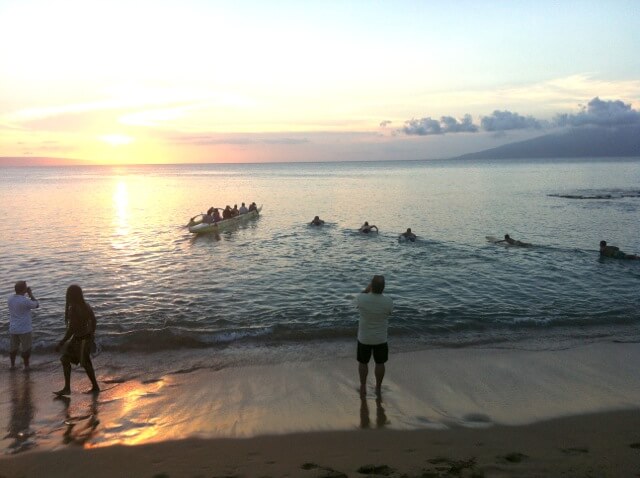 8.  The ashes meet the sea. Lei and flower petals spread over them. 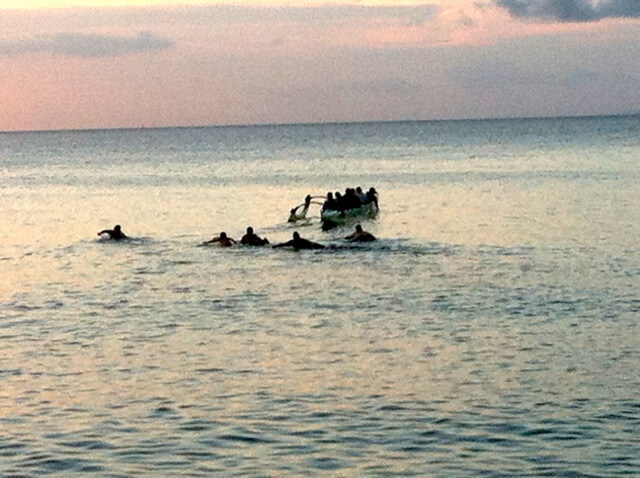 9.  Back on shore, the family disembarks. 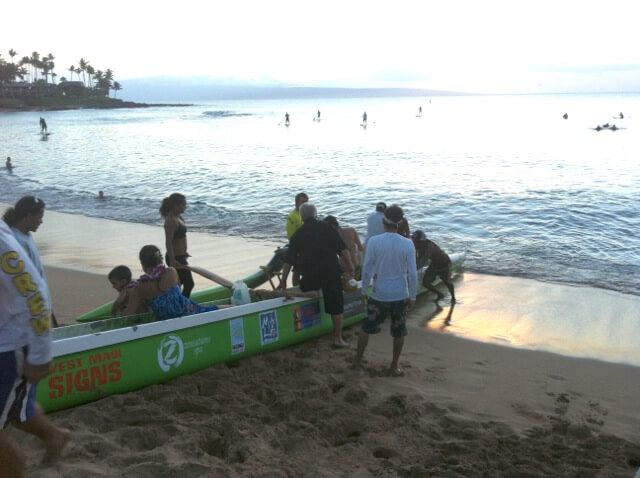 10.  Those on surfboards stay a while longer paying their respects, then paddle back to the beach. 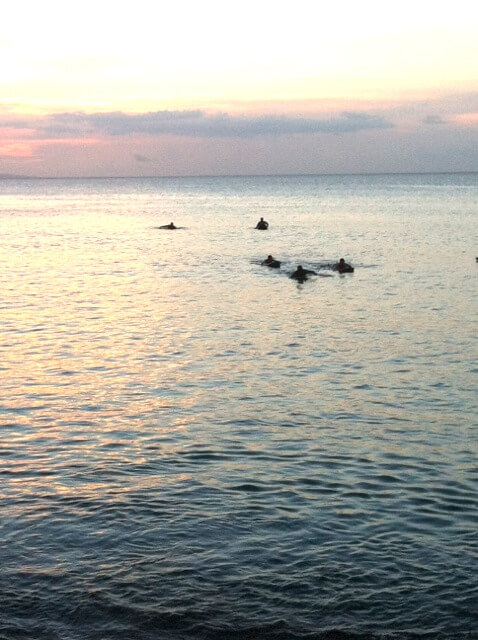 Science Speculation: At Honokeana Cove, we have many long-time owners and guests – some have been coming regularly since the condos were opened in 1969. Inevitably, some pass away, and some have asked for a Hawaiian sea burial of their ashes in our Cove, which is home to several dozen large Green Sea Turtles.

These guests are generally “haole,” that is, “foreigners” or non-Hawaiians. They come from somewhere outside the Hawaiian islands for their Maui vacation.  Most often, they live in the Western US and Canada, and of course are not ethnically Hawaiian.

There’s an honorable history of people adopting ethnic customs that are not part of their genetic heritage. For example, consider celebrations of St Patricks Day and Columbus Day by people who are not noticeably Irish or Italian any other days of the year. In addition, Christmas is a religious holiday that many non-Christians celebrate.

Finally, it seems appropriate to close with a description of the sea burial of Duke Kahanamoku. Duke was a five-time Olympic medalist in water sports between 1912 and 1932. Moreover, he popularized surfing, which was previously a sport known only in Hawaii. During most of his lifetime he was the world’s best-known Hawaiian.

Duke died of a heart attack at age 77 in 1968 and was honored with sea burial off Waikiki Beach in Honolulu. A description of his sea burial will give you an idea of the intense feeling and emotion surrounding Hawaiian sea burial today:

The beachboys sang their farewell song “Aloha Oe” and the shoreline of people began to weep. Duke’s ashes were paddled out to sea by an armada of outrigger canoes and surfers. Nadine Kahanamoku scattered his ashes into the sea. The mourners in the canoes, boats and on surfboards threw flowers and flower leis for Duke. Soon the ocean was a blanket of flowers and Reverend Akaka spoke amongst the tears, “Paoa was a man of aloha. God gave him to us as a gift from the sea, and now we give him back from whence he came.” A rainbow formed over the island, as the canoes made their way back to the beach.

Note: As a reader has correctly pointed out (see comments below), a lei can entangle sea life. A more earth-friendly approach is to scatter only flowers and flower petals. A modern lei can be made harmless by cutting the thread and pushing the flowers off into the water; retain the string for safe disposal on land.

Do you know someone who has opted for sea burial? How do you feel about sharing the customs of your own heritage with others?