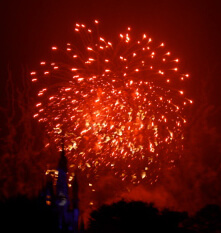 Science Fact: Fireworks!  One of the few things every culture seems to agree on: they are a great way celebrate a holiday or a special occasion.  And although calendars differ, the arrival of a new year is a frequent excuse for fireworks.  I’ll intersperse a few photos through this post.  And I’ll do my best at explaining the Chinese and hope that you my readers will correct me on my worst gaffes!

It’s generally known that fireworks originated in China, but few realize just how long ago that happened.  A fascinating document is the Huǒ Lóng Jīng, meaning in English Fire Dragon Manual.  This fourteenth-century treatise describes a comprehensive array of “fire-weapons” beginning with tenth-century fire arrows and extending through cannons, mines and rockets.  By the time the Huǒ Lóng Jīng was written, the Chinese fire-weapon technology was already far advanced: its origin lies back further still. 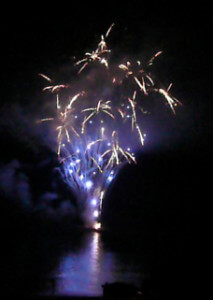 Some historians conclude that during the Han Dynasty 206 BC – 220 AD the Chinese would throw green bamboo stems into a fire; the bamboo would heat up and explode with a bang, loud enough to scare away evil spirits.  Others say that the Chinese even had an early form of gunpowder this early which according to legends was the result of the accidental mixing of common kitchen ingredients by a cook.

In any case, when gunpowder became available, the “pop” of a piece of bamboo exploding in a fire could be greatly enhanced if the bamboo were filled with gunpowder.  The term bào zhú, literally “exploding bamboo”, described these early firecrackers and is still the Chinese term for firecracker. 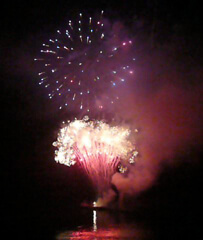 The invention of fireworks as we know it today is credited to the monk Li Tian, who lived in Liúyáng, a city in the Hunan Province, in the seventh century AD.  Today, the Liúyáng area is the world’s largest manufacturer and its Fireworks Museum has an imposing statue of Li Tian.

Naturally, there’s a lot of science behind modern fireworks, and there’s a great easy-to-watch source of fun and information: In 2011, Professor Chris Bishop gave a lecture at the University of Cambridge, UK, where he exhibited, demonstrated and exploded various showy devices for a family audience.  It’s 69.5 minutes long, greatly exceeding my usual attention span, but I found it fascinating nevertheless. 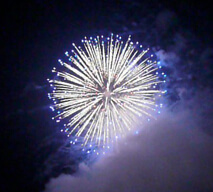 Science Speculation: Since fireworks are popular around the world, it’s interesting to look at the words used to describe them in different languages.

In English of course, we use both “fireworks” and “pyrotechnics” to describe public displays.  “Fireworks” as a derivation of fire + works is pretty clear, and “pyrotechnics” has the same origin: the Greek term is πυροτεχνήματα (pyrotechnimata), which can be dissected as fire + artifacts or works. 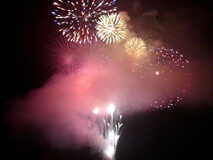 On what holidays or special occasions do you enjoy fireworks? Do you set off your own fireworks, or watch a professional show?

Happy New Year to all! 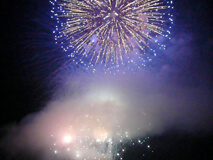