Science Fact:  Sensory Evaluation gives a scientifically sound way to measure almost indescribable sensations.  Today the subject is what you hear in a concert hall with “acoustic,” that is, unamplified music, such as a singer with an acoustic guitar, a chamber quartet or a symphony orchestra.

Last Thursday’s blog on Sensory Evaluation treated wine tasting.  That subject is so complicated that even a basic explanation of it took so many words that only the most persistent of my readers made it through!  Concert hall sensory evaluation is in many ways more difficult, but can be explained more quickly because it builds on the deep knowledge that has been gained in wine and food tasting.

A concert hall represents a major investment for a community and for that reason once they construct it, they’re stuck with it – changes, if they are made, will be infrequent and the subject of much hand-wringing and fund-raising.  Thus many stakeholders – donors, musicians, patrons and citizens – want a design that will give an enjoyable musical experience for as many patrons as possible for the kind of music that’s planned, and is moreover affordable.

For several reasons, concert hall measurement is even more difficult than wine tasting:
– Repeatability: Every live performance is unique; even when the same musicians play the same score under the same conductor, with the same warm-up exercises, the sound that emerges from their instruments will differ according to uncontrollable factors – for example: the sound the players hear bouncing back from the walls of the hall, which in turn is affected by the number of patrons, where they are sitting and what kind of clothes they are wearing; the variations inherent in any physical action; whether a wind player is coming down with a cold or a violinist has a tiny ache in one finger; the temperature and humidity experienced by the performers both on their way to the venue and inside the hall.
– Proximity: Concert halls are geographically distributed throughout the world; in most cases you can’t sit in one listening to music, then run across the street to hear the same music in a different venue.
– Sensory Memory: Even if you could miraculously move, say, the New York City Metropolitan Opera House so it sat next to Los Angeles’ Disney Hall, the sensory memory of human beings is quite short, a few seconds or even less.  By the time you hopped out of one hall and into the other (with conductor and instrumentalists hurrying along beside you), you would have forgotten the fine nuances of the first concert hall and would not be able to reliably compare your experience there to what you hear in the second hall.

Scientists have been studying concert halls for at least a century.  They have made acoustic measurements inside many spaces; developed models to compute how different halls should perform acoustically; and established international standards for such parameters as frequency response, sound strength, reverberation time and relative intensity of later echoes stimulated by a brief pulse of sound.  However, experts complain that such measurements inadequately describe the acoustics people perceive in a real hall.

Some researchers who have devoted serious attention to concert hall sensory evaluation are in the Media Technology group at Aalto University in Espoo, Finland. A recent Physics Today article by Prof Tapio Lokki describes how their Virtual Acoustics group has tackled and largely overcome the problems of Repeatability, Proximity and Sensory Memory described above.

There are a limited number of major concert halls worldwide – much fewer than the number of wines – so the researchers wanted to develop tools and techniques that could be applied to venues around the globe.  You may recall from the previous blog that wine studies often choose a group of experts and help them develop a common language, a process called Consensus Vocabulary Profiling.  However, in this case, the scientists would have had to identify and recruit experts from many countries (so as not to build a regional bias into the results), fly them to many concert venues, and hope they could remember their auditory experience well enough to establish a meaningful common set of descriptive terms.

Given the constraints of cost and auditory memory, a better approach was to use Individual Vocabulary Profiling.  In this case, there’s no attempt to constrain the descriptive terms used by the evaluators, although they might be given some suggestive terms to begin with, such as “clear”, “reverberant”, “distant”, “enveloping”).  Each panelist rates the different halls according to dimensions chosen by the rater.

How does one make sense of this?  You ask a sufficient number of raters (15 or more is suggested) to rate a large enough number of halls.  If one rater ranks the halls in order by a dimension she calls “fullness” and another rater ranks them in the same order using a dimension he calls “strength”, it’s likely that both raters are referring to the same feature of the halls, whatever you choose to call it.  Note that this technique is language-independent: the rater could be speaking French or Chinese and the match-up would still be valid.

The researchers had 17 panelists rate 9 concert halls and the panelists used a total of 60 different terms for their scoring.  By comparing the scores as suggested above, the scientists identified seven distinct measures that the panelists seemed to agree on.  The researchers gave these measures the names (translated from Finnish into English) Definition, Clarity, Reverberance, Loudness, Envelopment, Bassiness and Proximity.

We now have a common language for the members of our rating panel: the raters are using different terms, but we have learned how to match the terms used by different raters to the names we have chosen.  Now we have to confront the three problems listed at the beginning of this blog: Repeatability, Proximity and Sensory Memory.

In wine tasting these problems don’t arise: the wine taster will have six or a dozen glasses in front of him or her and can go back and forth between them to capture the precise differences between them.  The most repeatable and valid rankings occur when the rater can make these immediate one-on-one comparisons.

The solution to these problems adopted by the researchers was to create an “orchestra of loudspeakers” on the stage of the concert hall.  Real musicians automatically adjust their playing as they hear the ambience of the concert venue; however, the loudspeakers could be relied upon to play exactly the same way every time, even when moved from one hall to another.

To acquire the music for the loudspeakers, each musician is placed in a soundproof room (anechoic chamber), listening to a piano track of the music for synchronization, and plays his or her part which is then recorded.  Then on the stage, that instrument is simulated by one or more calibrated loudspeakers, pointed to direct the sound as that player’s instrument would project it.

This is the beautiful concert space of the Berlin Konzerthaus (Photo by Jukka Pätynen, Aalto University): 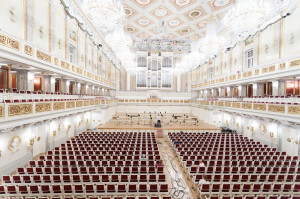 In the ninth row, left side you can discern what appears to be a dummy concertgoer, fitted no doubt with a set of microphones.  Here’s an enlargement of the stage area, showing the 34 loudspeakers forming a “symphony of loudspeakers” (Photo by Jukka Pätynen, Aalto University): 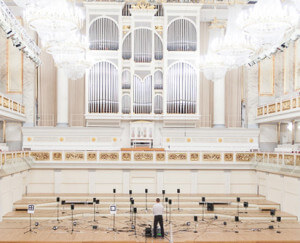 The array of loudspeakers gives a realistic simulation of a (small) symphony orchestra playing in that space.  So this gives us Repeatability.

To solve the other two problems the researchers needed also to reproduce the listener’s experience of sitting in each concert hall enveloped in sound.  They chose a seat 12 meters (39 feet) from the stage and mounted six microphones there, pointing in every direction.  Test signals were sent to each of the 34 loudspeakers on the stage, over a wide range of frequencies, and the resulting sound at the chosen seat was recorded.  They were able to analyze the results to determine exactly what sounds to play through 24 speakers in their listening room so that a panelist seated in that room would hear sounds just as if he or she were in the concert hall.  Since the evaluator can switch back and forth between the sounds of different concert halls, this solves the other problems of Proximity and Sensory Memory.

Science Speculation:  Now that the researchers in Finland have developed a systematic and scientific way to perform sensory evaluation of concert halls, the natural question is, where does this lead us?

The team has collected auditory data on twenty concert halls to date and some interesting results are beginning to appear.  In one study, sensory evaluation showed that the evaluators divided into two groups according to their individual taste.  One group preferred halls with an intimate sound, in which individual instruments could be heard.  The second group preferred a louder, enveloping sound with strong bass.

Clearly, this work can lead to the design of better concert spaces and the improvement of spaces that already exist, because now there is a complete vocabulary and set of test equipment with which to quantitatively understand the sensory experience of the concertgoer.  However, it’s also clear that to create the best listening environment, you first have to ask the question “for what kind of music” and “for what listeners”?  After all, even once you choose the type of music, there are clear differences in personal preference between different individuals.

Sensory Evaluation is something we all do when we attend any musical event.  Do you have favorite venues for acoustic performances?  How would you describe the sound in those spaces?