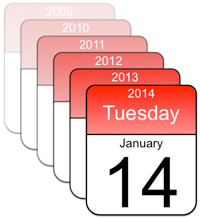 Science Fact:  Time travel is a popular theme in fiction and more recently, in physics.

Time travel has provided variations and complicated plot resolution in many stories.  Leaving aside hard-core science fiction and the Dr Who TV series, in which time travel is a central premise, consider a few of the many films:
– Men in Black 3 (2012), in which Agent J uses time travel to the past to save his colleague;
– Woody Allen’s Midnight in Paris (2011), which among other riffs has a trio of Surrealists pronouncing time travel “perfectly normal”; and
– Harry Potter and the Prisoner of Azkaban (2004), in which Harry uses a time travel device that he happens to have lying around to rescue his friends and resolve the story.

Like many scientists, I grew up reading science fiction and somehow assumed that time travel was limited to the world of fiction.  Thus I was surprised to find that perfectly serious physicists were studying time travel.  Not by climbing into Doc Brown’s DeLorean, but by studying quantum mechanics and general relativity, looking for loopholes in the mathematics that would permit odd things to happen.

Since the solutions to these time travel math problems typically involve faster-than-light travel, wormholes, black holes and cosmic strings, none of which are readily available in the home laboratory, the whole subject seems pretty theoretical.  There’s even a Chronology Protection Conjecture that postulates that time travel is flat-out impossible!  But physicists are a persistent group, and those who are not busy juggling the mathematics of quantum gravity have been taking a more direct approach.  And guess what!  There’s an experiment that you and I can perform any time we feel like it, to test whether time travelers may be among us.

Science Speculation:  Perhaps not the first but the most famous search for time travelers in our midst was conducted by Steven Hawking in 2009, and it is enshrined in a YouTube video.  Hawking hosted a champagne reception at the University of Cambridge, UK, complete with an overhead banner “Welcome Time Travellers.”  He broadcast the invitation as widely as he could, “No RSVP Required,” after the event.  The idea is that if someone, anyone, even thousands of years from now, wanted to attend and drink Hawking’s champagne, all he had to do was to hop in his time travel machine and go back in time to the date of the party.  In the video you can see Hawking counting down the seconds, but alas, no time travelers appear.

You might consider this merely a stunt.  What if the other-time visitors around us don’t happen to like champagne, or parties for that matter?  What if they are publicity shy and don’t want to show their faces or whatever it is that they have?

So let’s consider a much more comprehensive experiment using the power and the almost-ineradicable memory of the Internet.  Robert Nemiroff and Teresa Wilson, physicists at Michigan Technological University, decided to use the Internet to uncover evidence of people among us who might be using time travel.  They took three different approaches:
– They invited time travelers to send them a message dated in advance of their request – this resembles Hawking’s experiment;
– They studied search engine queries for word phrases that didn’t yet exist; and
– They looked for postings about events that were dated before the event occurred.

Their research paper rules out simple Google searches, Facebook and Google Plus because posting dates can be changed, and web pages often mix new information such as advertisements with old posted articles.  However, with Twitter they hit the jackpot: the Twitterverse contains a gigantic trove of messages that can’t be back-dated and that can be searched by date back to Twitter’s origin in 2006.

I’m going to tell you how they did their experiment so that if you wish, you can do your own study to see whether you can find evidence of time travel!

The researchers chose two events with clear creation dates: the discovery of Comet ISON on September 21, 2012 and the election of Pope Francis on March 13, 2013.  They used the Twitter search service Topsy (no longer in existence since 12/15/2015, alas) to search the terms “Comet ISON”, “#cometison”, “Pope Francis” and “#popefrancis”.  They chose “All Time” for the filter, then sorted the results by “Oldest First”.  They found a tweet referencing an article three days before the papal election, speculating about the possibility of Cardinal Sean O’Malley being chosen Pope and possibly choosing the name Francis.  But this was speculation, and named the wrong individual anyway!  Their conclusion was that none of the search terms appeared before they should have, so if someone used time travel to visit here from the future, he or she didn’t make themselves known through their tweets.

Now this is a piece of research any of us can do.  Choose something unexpected that never existed before a certain date (but after 2006), something that permits a distinctive search phrase.  “Hurricane Sandy Atlantic City” might be such a phrase, which should never have been tweeted prior to October 2012 (Hurricane Sandy made landfall October 29, just northeast of Atlantic City).  Then consult one of Topsy’s successors and see whether you can find tweets that seem to be prescient, in advance of the event.  For those who wish to make a serious run at this test, it’s worth looking at Nemiroff and Wilson’s full article, which gives good advice on how not to be misled by the vagaries of social media.

Is time travel real?  Perhaps you can find out!  Think of some revealing search terms and fire up your search apps!