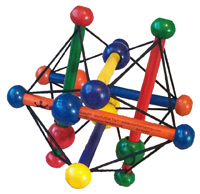 Science Fact:  The toy known as the Sqwish Ball may be taking a long long trip – to Titan, the largest moon of Saturn.

Science fiction traditionally describes interplanetary and even intergalactic travel as commonplace.  However back here on earth, humans can reach no farther than our own moon.  For some time to come, any physical contact with the rest of the solar system will be by machines. That is, robots, not people, will pilot the vehicles.

We have a lot of experience in airborne flying vehicles on the earth. We know the density of the air and we know the texture and hardness of possible landing sites. Also, we can choose to fly only in decent weather.  But everything is different when we send a vehicle into space.

Our destination may have essentially no atmosphere, like Earth’s moon, or only a thin one, like Mars.  Until we visit there, we’re not at all certain how firm the surface is. For example, before the Luna 9 spacecraft landed on the Moon in 1966, some feared that a lunar lander might sink down and disappear under many feet of moon dust.  And the weather?  By the time our spaceship arrives at an interesting destination, there might be the local equivalent of a hurricane on that planet (or moon or asteroid).

It’s clear that landing conditions may be quite different and largely unpredictable. Thus a great deal of a spacecraft’s weight will consist of stuff whose only function is to land it safely without damaging its instruments. Specifically, parachutes, retro rockets and big cushiony airbags.  What if you want the lander to move around and explore? Then you also have to devote weight to its locomotion system, so it can climb hills and possibly negotiate soft sand or even liquids.

However, NASA has an Innovative Advanced Concepts program which is meant to look at really new ideas.  And one of the very attractive new ideas is a takeoff on the Sqwish Ball toy for babies and toddlers. That toy consists of a number of rods held together with elastic bands.

Agogino, Iscen, SunSpiral and their collaborators at NASA Ames recognized that the Sqwish Ball or more properly “tensegrity” structure, offers many benefits as a means to cushion the impact of landing a payload on another planet. For example:
– It can be squeezed flat to save space in the transport rocket.
– If it’s dropped on almost any surface it will bounce up and re-assume its shape.
– By lengthening and shortening the elastic cables, the ball can be made to roll or crawl in any direction you wish.

The project report and a publication give a good summary of the work.

Here’s a photo of a Sqwish-like structure they built to protect a very simple payload: a raw egg (report, Fig 60): 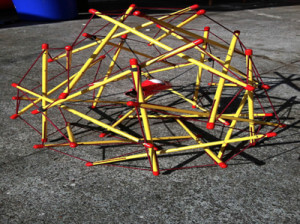 This frame, made from a toy kit called the Tensegritoy, survived a drop from 10 meters (31 feet) without breaking the egg!

The following sequence shows how the Ball Bot can be squushed flat for transport, then bounces into shape when you unpack it (report, Figure 11): 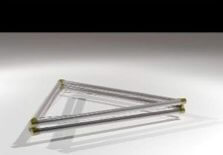 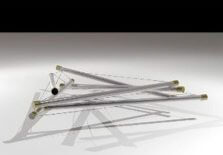 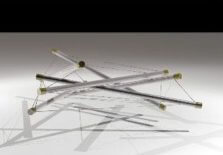 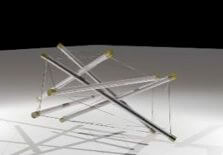 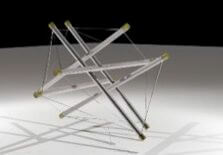 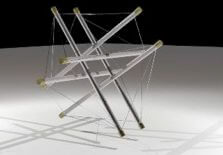 The NASA team calls their landing vehicle concept the “Super Ball Bot.” IEEE’s article about the program shows a real Ball Bot and a simulated one, rolling around on a bumpy landscape.  For more about this and related work, see Vytas SunSpiral’s website.

Science Speculation:  The Super Ball Bot doesn’t have any wheels. Therefore, how do you make it move?

What is necessary is to adjust the length of the elastic bands holding it together. Therefore, you would need to install actuators in each band that can get longer and shorter.  You can roughly see that shortening a band will distort the shape so that the ball shifts its weight to one side. Do this enough, and the ball will start to roll in that direction. You keep it rolling by shortening other bands and then releasing them, in a particular sequence.

The video in the IEEE article gives an idea of just how tricky it is to get this device to move.  The pattern of controls is very complicated. Thus a good bit of research has gone into developing efficient algorithms to control the motion, as described in recent articles 1, 2 and 3.

The whole apparatus is extremely simple. Therefore, researchers hope that a rocket could carry a number of these, dozens or even more, on an interplanetary mission.  The rocket could scatter them over a wide area to gather lots of data. If a few of them got damaged in landing, no harm.

The Super Ball Bot “Sqwishmobile” won’t win any speed trials. However, for an apparatus that packs flat, cushions the landing and then walks around on crazy terrain, it’s a very attractive invention.

Are you familiar with the Sqwish Ball toy?  If so, do you think its cousins would make good interplanetary travelers?