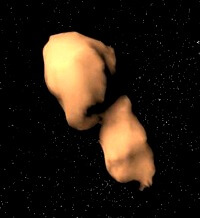 Science Fact: Asteroids, or Asterix?  If you’ve ever read the Asterix comics, you might say “By Toutatis!” at the latest news from the Asteroid Belt.  This invented curse, invoking the name of a Celtic god, seems appropriate to invoke the wonders of the heavens.

There is in fact a Toutatis out there in space, a peanut-shaped asteroid just under 3 miles in length and illustrated above.  Toutatis, formally known as 4179 Toutatis, is one of the rogue asteroids that isn’t confined to the Asteroid Belt but roams around and occasionally comes close to the earth.  Two weeks ago Dr. Zhu and his fellow Chinese researchers reported that the second Chinese lunar probe, Chang’E-2, made a flyby of Toutatis at the end of 2012, and the data resulting from that flight have now been analyzed and published.

Asteroids were once thought to be solid lumps of metal or stone, similar to the meteors that sometimes land on earth.  And in fact the largest asteroids are like miniature planets, nearly spherical and made of concentric layers of different materials.  However, as the photo at the head of this post shows, Toutatis is far from basketball-shaped.  The Chinese researchers studied the flyby photos and near the south pole they observed a large crater whose diameter is twenty percent of the length of the asteroid.  That immense crater implies that Toutatis suffered a mighty impact collision that would have shattered it if it had been a solid body; as a result, the researchers conclude that it is a soft pile of rubble.  This conclusion is reinforced by measuring the relative number of impact craters of various sizes, and also by noting boulders on the surface near the “neck” of the asteroid, which are loose rocks that rattled to the surface of the soft material as the result of vibrations due to collisions.

In general, the study of asteroids has revolutionized our understanding of the solar system during the past ten years.  An article by Drs. DeMeo and Carry just published discusses the asteroids in the Asteroid Belt located between Mars and Jupiter.  Theories about the formation of the planets predict that failed or disintegrated planets such as represented by the Asteroid Belt should be sorted into neat sub-belts, with all the asteroids at a certain distance from the Sun having similar characteristics.  However, detailed mapping of the 100,000 known asteroids shows that they are all mixed up, with many asteroids in the “wrong” places.  The researchers conclude that the Solar System has undergone two big shake-ups during its existence.  One theory (“Grand Tack”) proposes that Jupiter might have zoomed in as close as the orbit of Mars, stirring up all the asteroids as it passed through them, then boomeranging back out to its present orbit.

Science Speculation:  From a selfish human perspective, what are asteroids good for, anyway?  It’s true that a couple of companies are selling shares of stock predicated on mining asteroids for valuable materials.  However, asteroids are more likely to be a risk to humanity than a bonanza.

Early Superman comics showed us the way, with Superman’s asteroid encounter dramatized in a 1994 TV episode.  In it, Superman has to save humanity by deflecting an asteroid that is about to destroy all life on the planet; the world hangs by a thread because he forgets who he is, but fortunately remembers just in time to save the earth.

Is an asteroid risk fanciful?  Not completely.  Sentry is a NASA monitoring system that tracks all the asteroids that might hit the earth during the next hundred years.  If in fact the dinosaurs were made extinct by earth’s collision with one of the larger asteroids, as many believe, most of us would like to avoid a similar fate.  Thus considerable thought has gone into asteroid impact avoidance.  One of the popular weapons in the asteroid-killing arsenal is a nuclear explosion.  However, nothing is easy.  If the asteroid happens to be a big solid chunk of metal, an explosion might push it neatly out of the way, just like Superman.  But if it’s simply a pile of rubble like Toutatis, an explosion might merely break it apart, leaving multiple pieces large enough to do serious damage on earth below.

In a way, the activity to track asteroids that might be a risk to earth resembles the search for extraterrestrial life: (1) the chance of finding something important is very small each year, but perhaps very high if you keep looking long enough; and (2) once you find something significant, it’s not at all clear that we on earth know what to do about it, and can cooperate well enough to address the situation!

Some fields of research have the potential to immediately help people: then, there’s tracking asteroids.  Asteroids are a good Rorschach Test, in which our opinions about the research may reveal a lot about ourselves and about our attitudes toward science.