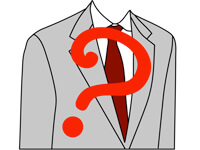 When you choose how to dress, whether it’s at the store buying clothes or making a selection after you shower, you’re communicating both outwardly and inwardly.  Outwardly, your dress instructs people, intentionally or unintentionally, what to think of you.  And recently science has learned that how you dress also sends an inward message that tells your brain how to function.

Dress to Inform.  Clothes may have arisen to protect our fragile bodies from the natural world, but they quickly became language as well.  Dress announced social status, so effectively that in ancient times no one was allowed to wear purple but the sovereign.

The idea of not only communicating but also manipulating the perceptions of others was popularized in the 1975 best-seller Dress For Success.  John Molloy’s catchy title sold the book and his research-driven practical advice spawned a mini-industry, with an updated edition, a woman’s version and imitators (e.g., Dress for Success with Women).  There’s even a quickie 13-page e-booklet for women who want a quick refresher/infomercial on the run.

To many people, it remains a novel idea that their choice of dress not only announces whether they are a good fit for their job but also strongly influences how competent they are judged to be.

Even those of widely respected accomplishment still give great thought to how they present themselves.  The New Yorker’s recent article describing author Jennifer Weiner’s talk to a medical convention quotes her as saying “handbags are important signifiers” and goes on to mention her carefully chosen orange Givenchy tote.

Dress To Perform.  The newer notion that research is now proving out is that how we dress also communicates internally.  It instructs our brain and our bodies how to behave.

We think of intelligence and competence as a combination of innate potential, training and experience.  In reality attitude, motivation and emotion can make us perform as imbeciles or as supermen.

Consider this revealing research study as an example: volunteers were instructed to don a white physician’s lab coat and take a test that measured their ability to notice things that were incongruous, such as the word “red” appearing in a green font.  Another group of subjects were given the same coat and the same test, but were told it was a painter’s coat.

Given the lead-in you, O astute reader, already know the results: the folks who donned the “doctor’s coat” demonstrated improved, sustained attention to detail.  The manner of dress had instructed their brains to enter “high performance” mode and they performed at a much higher level.  Other studies confirm that even choosing a bigger latte on your way to work may help you feel more in control of your day.

Is all this simply a matter of positive thinking or self-affirmation, as described in an earlier post?  Certainly, mindset can make you feel more powerful.  The “doctor’s coat” experiment measured the results but is silent on the mental processes.  However, since the subjects were not given any instruction as to how to approach the tests, it seems likely that if self-talk occurred, it was below the conscious level.

The practical advice offered by John Molloy and others applies far beyond the workplace in social settings of all kinds.  If you want to “succeed” with the opposite sex or in a group of friends, dressing appropriately can be a big help: find role models of your age and gender in similar surroundings who are just a bit ahead of you, and try to decode their chosen dress code.

How you dress will not overcome serious faux pas but if you’re already 90% there, the right clothing and accessories will boost you to 110%.  And that’s about as certain as anything you’ll find in research — which by its nature is inherently uncertain!