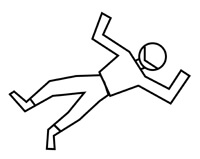 Science Fact: Suicide is forbidden by law, forbidden by religious precepts, and is often a forbidden subject for conversation. In the previous post we considered the understandable human desire to prolong and preserve life. This post looks at the opposite: the rather unexpected human desire, sometimes, to end one’s life.

Organisms instinctively try to protect themselves. The basic drives of hunger, thirst and sleepiness push us to fuel our bodies and to rest them. The very idea of casting aside the precious, ephemeral gift of life arouses horror and revulsion. How can anyone be happy without valuing life itself? And how can anyone find and enjoy the meaning of life without choosing to live?

We think of would-be suicides as nut cases. Yet it is not only the insane who choose to end their lives. After all, what is insane to one person may make sense to someone else. This post does not focus on mental illness, the apparent reason for the majority of suicides, but rather on the case of a sane person who feels compelled to make a terrible and irreversible decision.

My friend Tam Mossman proposed a look at the rationales for suicide to see what we could learn from them. When I thought about it, it seemed that a post about suicide seemed a timely counterpoint to the life-saving post about hospital infection. If this combination offends any reader, I sincerely apologize.

Humans are a social animal. We are here today because our ancestors succeeded in surviving and reproducing under daunting prehistoric conditions. The family unit, because of the many years it took to raise a newborn to an age of self-sufficiency, expanded to form the clan, the city and the nation.

Living together and cooperating has served humans well. The “Social Compact” is a shorthand way of saying, societies offer their members certain benefits and in turn impose obligations on them. Thus we have rules that restrict what the individual may do, ostensibly to protect the rights of others and to assure the continuance of the group in a competitive world. These rules may be laws, religious prohibitions or traditions, but in all cases they boil down to this: some people telling other people what to do.

How did the prohibition against suicide arise? Perhaps it has its origins in the instinct for survival, arising naturally in all creatures and then adopted by society as an immutable and universal law. Perhaps it arises from the notion that “if everyone did it” obviously humankind would cease to exist.

Or perhaps the source is the observation that because the overwhelming majority of people want to live, the rare individual who doesn’t must be abnormal, a freak. From here it’s only a short step to telling him, we forbid you to be so very different from the rest of us. However, Sir John Barry offers a more practical explanation in the case of English law: suicide was made a felony to enrich the king, who would then receive the suicide’s assets.

Nevertheless, even though we can understand the origins of the ban on suicide, it is troubling that this taboo denies an individual the right to be happy by controlling that most personal of his possessions, his own existence.

In modern times our social institutions each has something to say about suicide, mostly to write rules forbidding it:

1.  Religion: The Abrahamic religions (Judaism, Christianity, Islam) generally regard suicide as slap in the face of the Creator. Life is a precious gift that it would be rude to refuse. It’s analogous to dining etiquette, when you should be polite and eat those beets the hostess has offered you. Hinduism, Buddhism and Jainism also discourage suicide. However, most of these religions allow for at least a few exceptions. Eastern Orthodoxy is unusual in taking what might be called a neutral stance on suicide.

2.  Law: Laws against suicide were on the books of most nations until the 1800s. Rather we should say, laws against attempted suicide, since successful suicide can’t easily be punished. Those laws still exist in some countries, especially Muslim ones where religious precepts have found their way into legislation. In most Western countries the ban has shifted onto the shoulders of the would-be suicide’s compatriots. In the U.S. every state declares it a felony to assist a suicide. Australia goes even further toward prevention, providing that any person may use “such force as may reasonably be necessary” to stop another from committing suicide. The “right to die” movement in many countries, including the U.S., attempts to soften such laws. A typical right-to-die organization is Final Exit Network.

Updated 3/31/2018: Partly as a result of lobbying by such groups, under very tight restrictions a physician may legally assist a suicide in the Netherlands and Canada. Assisted suicide is also legal in six U.S. states (California, Colorado, Montana, Oregon, Vermont and Washington) plus the District of Columbia.

3.  Science: Scientists have not been idle in the field of suicide. However, social scientists have been content to study suicide as a phenomenon. Suicide fascinates them because it seems to violate straightforward models of evolution and survival of the fittest.

4.  Philosophy: Although philosophy is the “mother of all knowledge” and the foundation of the sciences, today it seems not to be a science, since universities class it with the Liberal Arts. Unlike the monolithic opposition of religion and the law, philosophers appear to be all over the map concerning suicide. By gross oversimplification we can characterize the attitudes of philosophy as follows:

Science Speculation: Ultimately, the attitude that an individual or a society takes toward suicide comes down to values. Is life itself such an overreaching value that it must be preserved at absolutely any cost? Evidently, many believe this. However, there are factors that to many take precedence, or at least impair, the sacrosanct status of life as a (capitalized) Value. These include: incurable pain; altruism; honor; and even the vigorous assertion of personal freedom.

A person who demands absolutes in life, simple conclusions about complicated and ambiguous circumstances, is likely to oppose suicide. But when that value conflicts with other black-and-white values (such as honor or personal freedom), he has a dilemma. He must either grant exceptions or go into denial.

On the other hand, a person who considers life an unfolding mystery to which we never know all the answers will be less judgmental. He will consider suicide to be a troubling dilemma that needs compassion and understanding, one that admits no rote answers.

When we seek the meaning of life, values play a key role. Values drive our mindset, our point of view; however, mindset also influences values. Life is not a simple path.

What circumstances do you think might justify suicide, from a moral, ethical or intellectual standpoint? To what extent does your view arise from the values with which you were raised?

A Comment on the Sources: Useful as it is, Wikipedia is neither authoritative nor original. When I write posts I generally search out original material and offer links pointing directly there. However in the case of Suicide, the Wikipedia articles are unusually thorough and easily accessible. Therefore, many links in this post go to Wikipedia articles, all of which give links to original sources.