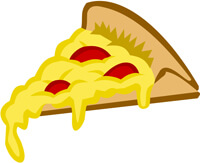 Science Fact: In yesterday’s post we stored a delicious bit of leftovers, but we did not reheat pizza. Today, we’re going to bring out the pizza, reheat it and eat it!

Pizza is healthy food, and a flexible food. Some people eat pizza cold, for breakfast or a snack, and swear by it. But most of us prefer an approximation of its original state, piping hot. Let’s address the difficult problem: how to suitably reheat pizza.

We might consider three generic types of food leftovers:

So exactly how should we reheat pizza? The literature on this important question is passionate but contradictory. You would think that a subject of such vital interest would have attracted extensive research and given us well-accepted answers, but such is not the case. As a scientist, I am tempted to spend the next month – or would it be a year? – in an intensive exploratory program to reheat pizza.

However, that cannot be. My research in how to reheat pizza has been limited. Therefore, for this post I consulted the myriad of contributors on the Internet, including:

Each of these sources brought something to the table, so to speak. All bloggers save their most uncomplimentary adjectives for the microwave approach to reheat pizza. Once you throw that out, you can find those who love each of the other approaches. With Hamlet we might muse: To cover or not to cover? Whether ‘tis nobler in the kitchen to apply low heat, medium heat, or heat that might melt steel?

Because pizza varies so widely across the U.S., I would like to believe that many, perhaps all of these writers are correct, as to good ways to reheat pizza from their own region. And that’s why I supplied both dates and (so far as I can decode them) locations for the above references.

The New York and Boston correspondents are presumably consuming thin-crust pizzas with little topping. With a light topping, their pizzas have no moisture to spare, therefore these writers advocate partial or complete coverage of the cooking pan to keep the pizza from drying out. In contrast, the Chicago blogger presumably plans to reheat pizza with considerably more topping. Therefore, he could ignore trapping the moisture and concentrate instead on crisping the crust beneath.

Recommendation: How to Reheat Pizza

My reading of this scholarly literature plus my own experience leads me to my next recommendation on how to reheat pizza: [Recommendations #1 and #2 appeared in the previous blog]

I most often reheat pizza with a medium quantity of toppings, and for me the Chicago technique seems to work best, as follows:

There’s a bonus to learning this way to reheat pizza: it works extremely well for French fries, fried onion rings and in fact just about any fried food including fish and chips. In fact, fried fish reheats so well that the advice given not to reheat fish should admit this case as an exception. Fried food can be healthy food, and when you reheat it this way, tasty food as well.

Which leads to my next and final recommendation:

Follow the “Reheat Pizza” instructions above with the following changes:

Do you reheat leftover pizza? Do you have a technique that works well for you? If so, please comment, telling us not only how you reheat it, but what kind of pizza you most often reheat, in case different pizza styles have different best approaches.