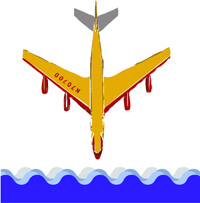 Science Fact:  Flight 370 teaches sad lessons about the limitations of science in the real world.

Before the Maylasia Airlines Boeing 777-200 dropped off the map in the wee hours of March 8, 2014, it seemed that nothing could be unknown or disappear in this modern world.  Headlines warned of spying by government agencies and hackers.  Other stories described data brokers who sell our personal information so we can be bombarded with robocalls and advertisements of all types.  Still more media touted Facebook’s new ability to automatically recognize and tag our faces in any image we post.  In such a world of no privacy, how can a machine 209 feet long and 199 feet wide weighing half a million pounds and carrying 239 human beings simply disappear?

It’s not as if it’s the first time a plane this large has gone missing.  In June 2009 Air France Flight 447, an Airbus A330 carrying 228 people, plunged into the Atlantic Ocean midway between the east coast of Brazil and the west coast of Africa.  It took two years to find the “black boxes” – the flight data recorder and the cockpit voice recorder – and another year to analyze the data.  It was finally concluded that Flight 447 had fallen victim to aviation’s recurrent nightmare: multiple major things going wrong at once.  In this case, the air speed sensor became inoperative due to icing which disabled the autopilot; then the crew made mistakes in manually controlling the aircraft that put it into a stall.

There was no mystery about “what” and “where” the Air France crash had occurred: within a month fifty victims and hundreds of aircraft fragments had been recovered from the surface of the ocean.  Whenever there’s an accident or a near miss, aviation safety experts want to learn from it in case changes in equipment, training or procedures are needed in order to save lives on other flights.  Therefore it was frustrating and worrisome that the recording devices were missing, postponing the “why” for three full years.

During the long search for the Flight 447 recorders many recommendations were made to improve the monitoring of aircraft location and condition, and to facilitate recovery of the data in case of a disaster:
– A fundamental problem is that is that airline systems are not as advanced as we might expect; because of cost, “airports and airplanes around the world use antiquated radar tracking technology, first developed in the 1950s, rather than modern GPS systems.”
– What about satellite tracking?  Unfortunately, high resolution maps with frequent updates exist mainly for highly populated areas, not the open ocean.
– Longer battery life for the underwater locator beacons attached to the data recorders; at present they are certified for only 30 days of transmission, but a 90 day requirement was proposed following the Flight 447 crash.
– A set of duplicate recorders that would automatically eject in the event of a crash and would float on water.
– Transponders that could not easily be shut off in flight, as apparently occurred on Flight 370.
– Continual delivery of flight information to satellite, making onboard recorders less essential or even unnecessary.
– More consistent adherence to safety standards across all airline carriers.

As a result of these carefully thought-out recommendations, the world’s airlines reached out and did – nothing.  Well, almost nothing: today on routes over the North Pole or the Pacific Ocean where radar coverage is spotty a few new aircraft upload small amounts of information to satellites; however, the amount of data and the number of flights to which it applies are both very limited.

How can improvements be so close at hand but not be adopted?  This is an example of science stubbing its toe when tackling real world problems.  Here are factors that constrain the real world of aviation:
– Money.  Airline companies, both private and public, are pressed to turn a profit in a competitive world.  An investment in technology has to bring a net financial return.  Today, the profitable places to add technology are in areas that increase revenue, such as in-flight entertainment, Internet and cell phone services.
– Control.  I heard a CNN anchor, I believe it was Anderson Cooper, recently say that the most difficult people to interview are airline pilots and medical doctors, and he believed this arises from the fact that they are required to be decisive with the lives of other people hanging in the balance.  [It would be fascinating to think about exactly what he meant, whether it’s true, and if it’s true why is it true.  But that would take us far off the subject today.]  These folks are respected and reinforced for always being in control.  So pilots themselves may always insist on having ways to disable any equipment that might malfunction and start a fire or other emergency, including transponders and position reporting equipment.  As the editor of a transportation journal said, “As long as there are pilots, they’ll be able to switch off systems.”

Science Speculation:  The economics of improved air safety and location reporting don’t add up for the airline companies.  But there are social and human costs when the rare disaster strikes.  Not only is there loss of life and devastation for surviving family members; there’s also a loss of the public faith that is required for people to be willing to spend good money on optional air travel.

However, there are political, competitive and international competitive barriers to recognizing these costs and making needed improvements.  A cynic might say that when a society chooses not to invest in technologies for public health and safety, it is setting a price on human life, and not a very high price either.

Although we want to believe that every human life is priceless, many of our social institutions do in fact place a value on human life in their normal course of business: the rationing of healthcare by insurance providers; the award of damages in wrongful death lawsuits; regulations to ensure safety in the workplace and on public transportation; and antipollution requirements imposed on businesses.

It is unfortunately the case that airline safety is one of the areas where science could make great improvements, but economics holds back progress.  If there is any bright side to the darkness of tragedy, it is that often improvements in public safety only occur when a dramatic loss of life and the resulting media attention forces governments and businesses to act.

Does the Flight 370 tragedy change your attitude about how often you travel by air?  Does it make you choose your airline more carefully?

Drawing Credit: Adapted from Shijou and artokem, on openclipart.org