Science Fact:  The depiction of horses in paintings raises questions touching both science and art: the nature of the real world, and the way we portray it.

Figurative painting – painting that is clearly derived from a real-world scene – is an amazing skill.  The painter needs to observe carefully. To translate vision into fine motions of the fingers. To mix appropriate colors and apply them in shapes and textures.

These physical skills are remarkable, and painters who mastered them were rightly applauded.  Yet the finished painting depends on many other factors:

– The Patron.  Many now-famous paintings were created at the direction of a client who wanted a certain subject for a certain purpose — perhaps himself or a family member, portrayed to impress others.  The scene might be religious, intended for devotion or to announce the owner’s piety.  A mythological or historical painting might display your cultural sophistication or your political loyalties.  And the patron might exist only in the mind of the artist, who chose a subject and style intended to attract a buyer.  A patron, when he existed in the flesh (and he was most frequently a “he”) would choose the painter in part knowing that a particular painter would portray him in a particular manner.

– The Caretakers.  Some paintings depict scenes chosen solely by the painter for reasons we can try to guess or reconstruct.  However, in order to survive the centuries for our enjoyment, they had to acquire admirers who would take the trouble to preserve them – adopted patrons, you might say.

– The Message.  What messages did the artist intend to communicate?  Portraits in particular often use a stock language of accessories.  Forget the orbs of royalty, the swords of conquerors, the attributes of saints.  Painters made liberal use of symbols familiar to their audience: jewelry and costumes representing wealth and social status; books and scientific devices representing culture and learning; landscapes telling of nobility and family history.

– The Emotion.  What does the artist want us to feel?

– The Training.  For centuries art has been taught through apprenticeship, both in European and Asian countries.  Even today, apprenticeship is a recognized way to learn to paint. Thus paintings also derive from the conventions that the artist follows, wittingly or not, or chooses to abandon.

– The Time.  A painting is a product of its time and place.  A work of art that departs from convention may be roundly criticized but the resulting notoriety can draw attention to the painting and the artist, which may evolve into affection.  However, a painting that is too far from its natural home in space and time will simply rejected and may well drop out of history.

My friend Tam Mossman pointed out the unrealistic poses of speeding horses in so many paintings that predate modern photography.  He questioned whether a culturally imposed blindness prevented otherwise skilled painters from accurately observing horses in motion.  Examples are easy to come by.  Here’s Jean Louis Théodore Géricault’s 1821 “The Derby at Epsom”:

In case there’s any doubt that the horses are floating above the ground, look at the shadows in John F. Herring Sr’s 1851 Great Match (The Flying Dutchman and Voltigeur): 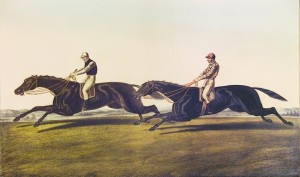 The true appearance of a speeding horse had to await the work of Eadward Muybridge.  Leland Stanford, railroad baron and former governor who later founded Stanford University, hired the British photographer to settle a hotly argued issue: is a running horse ever completely off the ground?  This “unsupported transit” was hotly contested in the 1870s: some people swore they could see the legs leave the ground during a trot or gallop, while others insisted that it never happened – in fact, that it couldn’t happen, because “horses can’t fly” and would collapse unless supported by at least one leg.

Stanford, as a relative newcomer to racing, wanted to be proven right.  He paid Muybridge to develop the technology to make  short-exposure photographs, which after five years of work resulted in Muybridge’s famous 1878 study “The Horse in Motion”: 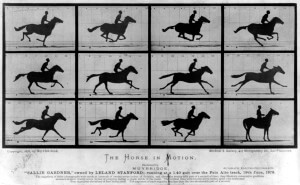 In frames two and three, the horse is most assuredly “flying.”

These photos demonstrated that the “hobby horse” poses of traditional paintings, with the horse airborne with legs stretched out, were clearly false.  Artists were offended by such criticism.  Auguste Rodin famously proclaimed:

If…in…photographs, the figures…seem suddenly fixed in mid-air, it is because…there is no progressive development of movement as there is in art…it is the artist who is truthful and it is photography which lies, for in reality time does not stop…

Science Speculation:  There’s a mystery here.  In the nineteenth century, at least some people asserted that they could see the legs of the horse leave the ground – their vision was that keen and, it turned out, accurate.  Clearly at least some of the painters through the ages had the visual skill to realistically depict horses in motion, so the question is, why didn’t they?  Moreover, even after Muybridge’s time, when the exact silhouette of a horse in gallop was well known, paintings like Magritte’s 1925 The Lost Jockey make a point of showing a racing horse in poses not matched with reality.

We should pause to point out that most horses in paintings are accessories, mere adjuncts to some human activity.  They are standing still to lend local color or authenticity to the occasion being portrayed.  In equestrian portraits, the horse adds stature and magnificence to the sitter.  Less often a horse with a rider will be rearing up or raising a front leg, expressing the rider’s vigorous action (slaying a dragon, perhaps) or energetic valor.

But what can we make of those rocking-horse animals populating so many paintings?  Let’s pose some possibilities:

– Misperception.  A horse moves pretty fast in a gallop – 30 miles per hour.  In 1870 (and of course today) many people could not see the horse’s feet all leave the ground.  So perhaps many painters were just not that observant, or learned their craft by copying erroneous earlier artists.

– Convention.  When a horse jumps a ditch or a fence, it’s easy to see it sailing through the air with legs outstretched, so that pose becomes associated with motion, speed and grace.  A zoologist, animal physiologist or horse fancier might criticize this pose as unrealistic for a racing horse.  However, the casual viewer may well read it as shorthand for speed and not pick it apart.  In fact, an 18th century painter who accurately depicted the position of a running horse’s legs risked distracting or alienating his audience by using a pose that was not familiar to them.  Muybridge’s third image of a horse with its legs gathered like that of a crab has only become acceptable today because we know that it is true, as seen in this horse racing photo by Softeis: 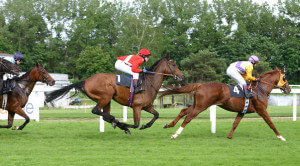 – Intent.  Rodin was not the first artist to proclaim that art aspires to a truth higher than reality.  Art criticism often tries to unravel the intent of the artist and intent may be part of the answer.  Magritte’s jockey is racing across an idealized landscape.  In the earliest versions, it’s a stage-set and he is clearly lost, but even in the 1948 version the horse’s image is almost the same: 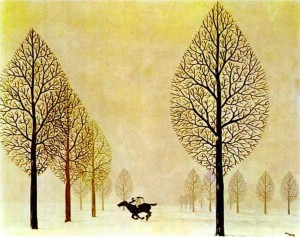 The jockey’s posture suggests “full speed ahead”, and the horse’s front legs suggest a gallop.  However, the hind legs seem to be braking or repositioning.  The horse’s posture echoes the title of the painting; the horse knows something is wrong, although the jockey hasn’t yet figured out that he’s lost.

Often the artist purposely avoids giving us a realistic depiction.  Magritte offers us the image of a pipe emblazoned “This is not a pipe”: 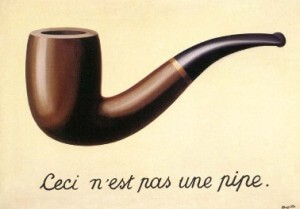 Of course he’s right, it’s an image, not an object – yet within the frame and world of the painting, the pipe is as real as any other bit of paint.

Magritte is emphasizing an obvious point: in one way or another, art tells lies.  But that’s what we want from art.  We value a bowl of fruit for its scent, its taste, its natural presence, the beauty of life’s miracle.  But we value a painting of that bowl of fruit for its falseness: its constancy; its preservation from mold and decay; its wonderful predictability, always the same every time we see it; its hidden messages, intended or not, in the way the surface of the paint reveals the touch of the artist.  As we revisit a painting it reveals surprises: shapes formed by the daubs of paint; bits of color on a peach that are repeated in a drapery; a change in texture that simulates a shift in the angle of the light.  The painting transmits many messages, most of them false in that they do not reflect the reality of the scene, which may be long gone.

Is there a truth within these lies?  Only if we choose to believe that truth depends on what we bring to the viewing, and can never be the same for two people.  The truth of art is not only elusive, it is inherently personal and subjective.

In science, there are many important questions that cannot be answered within science itself.  Areas such as the environment, nuclear energy, the value of space exploration, the birth and death of the universe: these are either tangled with social issues, or beyond our present wisdom.  Only the simplest questions of science, those that depend on accepted principles and assumptions, have clear answers.

In art, none of the questions have clear answers.  Art speaks to us in lies.  Yet each of us may find our own truth in a work of art and may, on occasion, walk away from it a changed person.

Which of the images of horses running shown here seem most “real” to you?  Has a false artistic depiction (one that is not photographically accurate) ever spoken a truth to you?