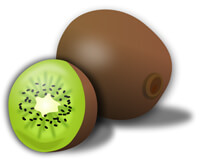 GMO, genetically modified organisms, are a hot topic for many people. Kiwifruit grows strictly with conventional farming – totally non-GMO – yet the growers take advantage of modern genetic technology. How can this be? It’s an interesting story of science sidestepping politics.

The Quest for an Improved Kiwifruit

The kiwifruit story started for me with a recent article describing efforts in New Zealand to improve the kiwifruit. Kiwifruit, like most or all fruits, is a healthy food. However, the majority of the top ten commercially profitable fruits in the world are “convenience products.” To join this club means that the kiwifruit should either become “hairless” or have an easily peelable skin.

Incidentally: This fruit bears the shorter name “kiwi” in many other parts of the world. However, New Zealanders always call it “kiwifruit.” New Zealanders are happy to call themselves Kiwis in honor of the endearingly cute kiwi bird that is native to the country. However, for reasons not clear to me they do not want to have the same name as a fuzzy fruit.

Like all plant cultivators today, the New Zealand plant researchers wanted to avoid being drawn into the GMO controversy. So let’s take a moment to summarize that controversy.

Humans have been breeding plants for all of recorded history to improve yield, variety, quality, tolerance and resistance to disease or insects.  The famous horticulturist Luther Burbank used the same tools as many breeders before him. He created new plants by hybridizing different plants and then selecting the offspring that exhibited desired characteristics.

In other words, he intentionally changed the genetic makeup of the plants, engineered the genes you might say. And no one complained. In fact, his catalogs “New Creations in Fruits and Flowers” were immensely popular a hundred years ago.

GMO, genetically modified organisms, refers to plants or organisms whose genetic material has been altered using modern genetic engineering technology. GMO is so controversial that many countries other than the U.S. and Canada require such products to bear GMO labels. New laws on two of the Hawaiian islands regulating GMO are facing challenges in State and Federal courts.

So why was genetic modification OK when Luther Burbank did it, and not OK when Monsanto does it?

There’s a great Wikipedia illustration credited to “Smartse” that illustrates the GMO concept (click the figure to enlarge it): 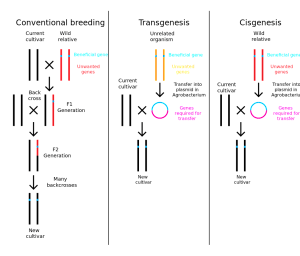 On the left, a conventional breeder crosses two related species the “old-fashioned” way: through cross-pollination.  When the species are too unlike to breed merely by pollination, breeders assist them with a number of tricks. They may use chemicals that increase chromosome count. They may resort to “embryo rescue,” sort of a preemie incubator for plants. And somatic fusion, in which breeders artificially merge cells from two different types of plants.

Breeders also increase the variety of plant stock by intentionally creating new mutations. As suggested in the figure above, after successive cross-breeding and selection, eventually the breeder obtains a “cultivar.” The cultivar’s desirable characteristics continue from generation to generation.

The middle column above illustrates transgenesis. In this process a breeder extracts a few genes from an unrelated organism. He inserts those genes into the genetic code of his selected plant. Cisgenesis is similar, except that the source of the genes is a wild relative of the target plant.

GMO embraces both transgenetic and cisgenetic breeding. A European Commission survey of public attitudes showed that public attitudes are much more hostile to transgenesis. In 24 of 27 countries surveyed, a majority of people (excluding “Don’t Knows”) supported cisgenic but not transgenic apples. (Europeans and Biotechnology in 2010, Figures 18 and 19.)

Since the end result of conventional breeding and GMO breeding is the same, what’s the big fuss?  I can’t improve on the Wikipedia explanation:

Social science surveys have documented that individuals are more risk averse about food than institutions.  There is widespread concern within the public about the risks of biotechnology, a desire for more information about the risks themselves and a desire for choice in being exposed to risk.  There is also a widespread sense that social and technological change is speeding up and people feel powerless to affect this change; diffuse anxiety driven by this context becomes focused when it is food that is being changed.

I know you’ve been dying to ask: what did the kiwifruit breeders do to avoid the GMO controversy without limiting their breeding program to Victorian technology?

They start by employing a full spectrum of conventional breeding approaches. To this they add modern plant genomics to guide the breeding choices. And they use modern techniques to study the resulting hybrids to see which genes have been successfully retained and enhanced.

In other words, they don’t directly tinker with the genetic sequence. They use accepted methods to mix up the natural genes. Then they they use modern technology to observe what they have so, as to get results more quickly and more accurately.

This combination of steam-age growing and high-tech observation seems to be the magic bullet. It avoids public GMO aversion while still permitting an up-to-date plant research program.

U.S. research and the UK FSA conclude that the amounts of pesticide normally found in grocery food do not pose a “significant concern.” Nevertheless, a risk is a risk.

Therefore, it seems odd that some people who happily eat non-organic food, including produce on the “Dirty Dozen” list, should be implacably opposed to healthy food that bears a GMO label.

But that’s the real world today. Science becomes politicized, often unpredictably, and scientists like everyone else have to live with that reality.

Do you consider GMO when you buy food?For that matter, do you try to buy organic food? How much does a small probability of risk to health affect your choice of food?