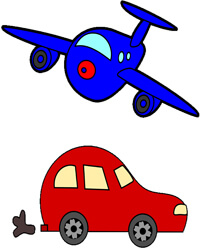 Science Fact: Travel fatalities are a concern to many of us who want to reduce our risk of serious accident when we travel by car, aircraft or cruise ship. This post looks at the data and the science, then gives practical recommendations for the traveler. I usually give references by links in the text; however, in this post most references appear at the end, with a sentence or two summarizing each one.

The Data. Data on travel fatalities are noteworthy for their lack of completeness. In the U.S. and other industrialized countries, aircraft accidents are thoroughly investigated and documented, and motor vehicle accidents are almost as well reported. However, many countries are inconsistent about collecting and reporting their data. Foreign air travel fatalities in particular are often under-reported. A similar situation holds for cruise ships, with the additional complication that almost all cruise ships are registered in countries that rely primarily on voluntary reporting by the cruise lines.

The Science. Once the data is in hand, there is no general agreement about how to process it. Representatives of the transportation industry want to bend the analysis to show that their form of transportation is especially safe. There is a lot of room to manipulate the data. For example, do you measure travel fatalities per vehicle mile, per passenger mile, or per trip? (An additional complication: some sources label the data per vehicle mile when they mean per passenger mile, and vice versa.) Do you include all deaths on board or do you exclude categories like natural causes, murder, non-vehicle accident and suicide?

The Traveler’s Viewpoint. Even if we had all the data on travel fatalities and a consistent way to analyze it, we come up against the human element. One of the biggest factors is the fear we have when we have less control, which makes many people prefer cars and motorcycles to other forms of transportation regardless of the risk numbers. Other factors are our awareness from recent news headlines; our aversion to catastrophic events involving many travel fatalities in one incident; and our dread of dying when we have time to get scared (think, airplane crash) rather than when it happens more quickly (head-on automobile collision).

There’s also this point: It’s much less likely for a commercial airliner to crash than for an automobile to have a fatal accident; however, the airliner holds a lot more people. Therefore, even though aircraft have many fewer accidents per mile traveled, they have a similar number of travel fatalities compared with cars.

Recommendation: Choice of Transportation. This is my distillation of the imperfect and contradictory information that abounds on travel fatalities:
– Over Land: Automobiles and major commercial airlines are about equally safe in terms of travel fatalities per mile traveled; buses 50% higher; trains about 4 times higher; motorcycles and small aircraft about 10 times higher.
– Over Oceans: Cruise ships claim low travel fatalities but they seriously under-report; I assert that commercial aircraft are much safer than cruise ships per mile traveled. You might think that when something goes wrong on an airplane, you can crash and die in one heck of a hurry. However, when something goes wrong on a cruise ship, you can’t necessarily just float until you are rescued: most cruise ship fatalities occur by fire, “man overboard” or by sinking, all of which can lead to a fatality long before help arrives.

Recommendation: Length of Trip. Most aircraft accidents occur during takeoff and landing, so they should actually be counted on a per-trip basis. In contrast, automobile travel fatalities can occur anywhere in the course of your trip. Therefore, for a relatively short trip (think a few hundred miles) you are safer driving; for a longer trip you are safer flying.

Recommendation: Choice of Airline. There’s no consistent way to rate the safety of different airline companies. Foreign carriers in particular are plagued by under-reporting of accidents. However, there are four things the traveler can check when choosing an air carrier:
– AirlineRatings.com gives safety ratings for individual airlines and a tool with which to compare airlines. These ratings are based strictly on how well the airlines satisfy the checklists maintained by various regulatory bodies. You want an airline that rates 7 out of 7 in Safety. However, note that two popular low cost carriers, Southwest and Spirit, rate only 5 out of 7 simply because they have not chosen to get an IOSA certification – this may not mean that they are less safe.
– JACDEC lists the 60 safest global airlines. The top-ranked U.S. carriers are #27-Delta, #31-United, #41-American Airlines, #43-US Airways and #45-Alaska.
– The European Union publishes a long list of airlines that are banned or restricted from the EU. Most are based in Africa and Asia; you want your airline to NOT be on this list.
– The Federal Aviation Administration rates 89 countries according to whether their Civil Aviation Authority satisfies International Civil Aviation Organization standards. At present, 10 countries have a “fail” rating: Barbados, Bangladesh, Curacao, Ghana, India, Indonesia, Nicaragua, Serbia, Sint Maarten and Uruguay. You’d be advised to avoid air carriers based in these countries. However, note that if the country does not provide flights to the US or code-share with US carriers, it may not appear on this list.

If your airline looks OK on these lists, you may also want to consider its comfort level. The AirlineRatings.com website rates not only Safety but also Product, a measure of onboard amenities and comfort. U.S. airlines do not rate so well here as they do in Safety. The standards are highest for Full Service Carriers, with a maximum score of 7; on this scale, as of 2014, Delta rated 5; American and Hawaiian rated 4; United and US Airways rated 3.5.

For Low Cost and Regional Carriers the scale maxes out at 5; on this scale, as of 2014, Alaska, Frontier and JetBlue rated 5; Southwest rated 4; American Eagle rated 3; and Spirit rated 1.5. (Since 2014 AirlineRatings.com has revised its website and its “product ratings” are no longer visible, at least not to me.)

Once you have found your ideal carrier, SeatGuru.com will help you find the most comfortable of the less-than-ideal seats you will be offered.

Recommendation: Choice of Cruise Line. Since there are no consistent international safety standards and no mandatory international reporting, total ship safety is difficult to assess. However, the Centers for Disease Control perform unannounced inspections of cruise ships stopping at U.S. ports and publish annual lists of how the ships score on their sanitation inspection. Convenient summaries also appear at the ShipDetective website. If you choose a ship that has scored 100 or close to it consistently, it means that their internal training and operational systems are working well – and it suggests that other aspects of passenger safety are probably also OK.

By my tally, Carnival Cruise Lines ships scored an average of 96.6 in 24 inspections; Royal Caribbean 96.3 in 21 inspections; Princess 94.8 in 17 inspections; Holland America 96.1 in 15 inspections; and so on. Lest you think that CDC is a rubber stamp, the ShipDetective summary lists 58 reports in 2013 of which 11 were unsatisfactory.

Does information about travel fatalities affect your choice of transportation options? Or do other factors (cost, schedule, destination) overwhelmingly dominate?

A Comparison of Risk
The US government report Deaths: Final Data for 2014 (Table 10, page 44) includes a list of accidental deaths in nine different categories.

How Risky is Flying?
A thoughtful PBS article comparing the risk per vehicle mile for motor vehicles, aircraft, motorcycles and railroads. A good discussion of the fear factors that go beyond the statistics.

Is General Aviation safer than driving?
Bloggers comment on the Harry Mantakos article; diehard GA enthusiasts trash his assumptions and data, others think he’s in the right ballpark.

Highway vs Aviation Safety
Ron Rapp compares data to conclude that general aviation is 16.24 times as risky as traveling by car.

And the world’s safest airline is …
CNN’s January 2014 review of the latest airline safety ratings from airlineratings.com.  Qantas scores as the safest.

Safest Airlines In The World
The ABC News report of the airlineratings.com safety ratings

An accurate global Airline Safety Rating is impossible say Skytrax
A discussion of why airline safety ratings are not comparable, especially in countries where governments and regulatory authorities do not require and provide full reporting.

Airlines restricted from operating within the European Union
The EU bans or restricts air carriers from a long list of Asian and African countries. Their restricted list includes all carriers from Indonesia and Philippines except their major airlines.

Center for Disease Control Cruise Ship Sanitation Ratings
This website gives the sanitation ratings for cruise ships as determined in surprise inspections by CDC when the ships call at U.S. ports.

The CDC results are compiled by year at the ShipDetective website. For example, in 2013, 24 ships scored a perfect 100, 23 were still satisfactory with scores between 86 and 93, and 11 scored an unsatisfactory 85 or less.

Death Tolls on Cruise Ships
Lists numbers of deaths by ship, with Costa Concordia well in the lead at 28 deaths. However, by cruise line Carnival Cruise Lines leads with 68 total deaths. NOTE: During 2017, this website was down for an “update” although at this time (Feb 2018) it appears to be working. You may wish to consult this related article from The Telegraph.

Passenger Deaths a Cruise Concern
A 2006 article discussing 52 cases of “person overboard” during a 10 year span, of whom 40 died. Half or more were suicides, and most incidents occurred on Caribbean and Bahamas cruises.

On average how many people die on cruise ships per year?
This blog incorrectly states that “99.9%” of cruise ship deaths are natural. However, more plausibly they quote the average age of cruise passengers as 49; for cruises of a week or more 64; and on Holland America round-the-world trips 75. Natural deaths on a long cruise might not be so surprising in this age bracket.

Cruise Line Statistics by Cause of Death
This blog gives a number of tables, one of the most interesting being arranged by cause of death. They quote 232 deaths due to fire, 65 by natural causes, 57 due to going overboard, 40 due to ships sinking, 17 by murder, 12 by drugs or alcohol, 9 by accident, plus a few miscellaneous. Data are taken from public reports so are not complete.

Cruise Line Statistics by Ship Name
This table, which has been removed from their website since original publication of this blog, listed 32 for Costa Concordia, all others 7 or less per ship