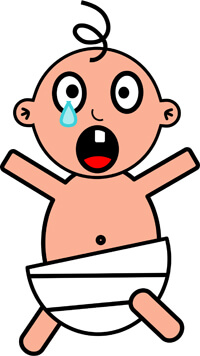 Science Fact: Babies cry at night to keep their parents from having sex. Scheming babies? That’s crazy! Isn’t it?

Babies do learn remarkably quickly. Japanese psychologists observed a baby as young as seven months engage in fake crying to get her mother’s attention. However, the idea that babies might already know where babies come from and have a strategy about it seems ridiculous.

Let’s look behind that headline and find the facts, the true science.

It’s a proposal. The idea that babies cry to discourage sex and pregnancy is a postulate, a proposal by Harvard biology Prof. David Haig. It’s not yet an accepted fact in any sense, although Haig did publish a well-written article discussing the idea and citing sixty-nine scholarly references.

Purpose doesn’t mean understanding. A quick reading of the headline suggests that babies cry after giving the matter some thought, some analysis. But that’s not what it says.

Some 1800 species of birds migrate, usually to find food when the seasons change. They don’t have a conclave to discuss it first, they just do it. We think of it as instinct, but it’s a behavior that evolved in response to their environment. Some time in the past, a few birds noticed the days getting shorter and food getting scarce and chose to go somewhere else.

The birds that chose to head into colder weather didn’t do so well and didn’t survive to pass along their genes. The ones who found the warm-weather direction found more food and longer daylight hours to raise their families, and their inclinations got passed along to their offspring. So the behavior may seem perfectly logical to us but we don’t have to assume a high level of bird intelligence to explain it. We can assume that it developed by trial and error and was reinforced by survival of the fittest.

Let’s think about the headline the same way. Babies cry for a reason but not necessarily with forethought. It’s being suggested that the reason in some cases is to interfere with sex. If the crying has survival value for the baby, it could have evolved for that reason. But we still need to ask, is the headline true, is it factual?

Is it a fact? Haig’s excellent article, which I recommend for reading, discusses intergenerational conflict: the idea that what’s optimum for the infant may be different from what’s best for the parent. For this post, let’s instead start at the “output” of the child-rearing process: what factors will enhance the survival of the baby (and the carrying on of its genes), and what can the baby do to help itself?

A newborn is pretty helpless but at least it can reach out, suckle and cry. Frequent breastfeeding during the night may interrupt the mother’s sleep but it has many benefits for the baby:
– More nutrition means faster, healthier growth for the infant
– Breast milk provides immunity from infection, an important factor where diseases are a risk
– Breastfeeding strengthens the bond with the mother

There’s also a subtler benefit to the baby that was pointed out in 1986 by Nicholas Blurton Jones (Education/Anthropology/Psychiatry, UCLA) and Elizette da Costa (Psychology, University of Illinois): breastfeeding delays the re-start of ovulation and thereby reduces the mother’s fertility. This can postpone her next pregnancy.

Why is this good for the baby? Haig quotes a number of studies showing that infant mortality is much higher when a baby is followed immediately by a sibling, especially in situations where there’s a scarcity of food or prevalence of infectious disease. Better survival presumably results from increased food and immunity, and also a higher degree of parental attention and protection without competition from a younger brother or sister. Either way, it’s easy to see that for thousands of years babies who tended to wake and feed during the night would be more likely to survive to adulthood and pass on their genes to future babies.

Parents want their children to grow and prosper for many reasons, including the possibility that the children will help provide for them as they get older. The soundest strategy for parents in many situations has therefore been to have many children, in hopes that at least some would survive to adulthood. However, the best strategy for the child is to be an only child, or at least to delay the arrival of siblings. Thus the goals of parent and infant can partially conflict with one another.

When babies cry, the crying plays a role in this intergenerational conflict. In western industrialized societies babies typically don’t sleep in the same bed as their mothers. Since the mother is out of reach, the only way for the infant to breastfeed at night is to cry and hope the mother will come close to feed it. The baby is descended from babies who breastfed at night and thereby delayed the arrival of younger siblings. Thus the baby is predisposed to do likewise.

Babies cry for many reasons but the evidence suggests that among those reasons are to delay the arrival of a competing brother or sister. Babies accomplish this by breastfeeding, especially at night when the mother’s hormones are highest, thereby delaying her ovulation.

Science Speculation: The crying may in fact discourage the parents from having sex. That headline is a bit of an extrapolation from Haig’s article, although Haig does grant that maternal fatigue (and therefore less sex) is a likely part of babies’ inherited strategy. Nevertheless, the headline is right in spirit: the suggestion that babies cry in part to discourage conception seems well supported by the evidence.

Babies cry for many reasons. Do the conclusions of the studies quoted here seem reasonable to you?

Acknowledgment: My education is sorely lacking on the subject of babies. Therefore, I am much obliged to my wife Nola for fact-checking this post. By the way, Nola’s opinion is that “babies cry because they want to!”