The FBI publishes crime data for each U.S. city according to their Uniform Crime Reporting (UCR) system. Their data excludes certain violent crime data for most cities in Minnesota and for the city of Chicago. I have supplemented that information with other sources as explained in the Appendix to this post.

An interesting thing happens when you plot the FBI data on violent city crime as a function of city size, that is, population: 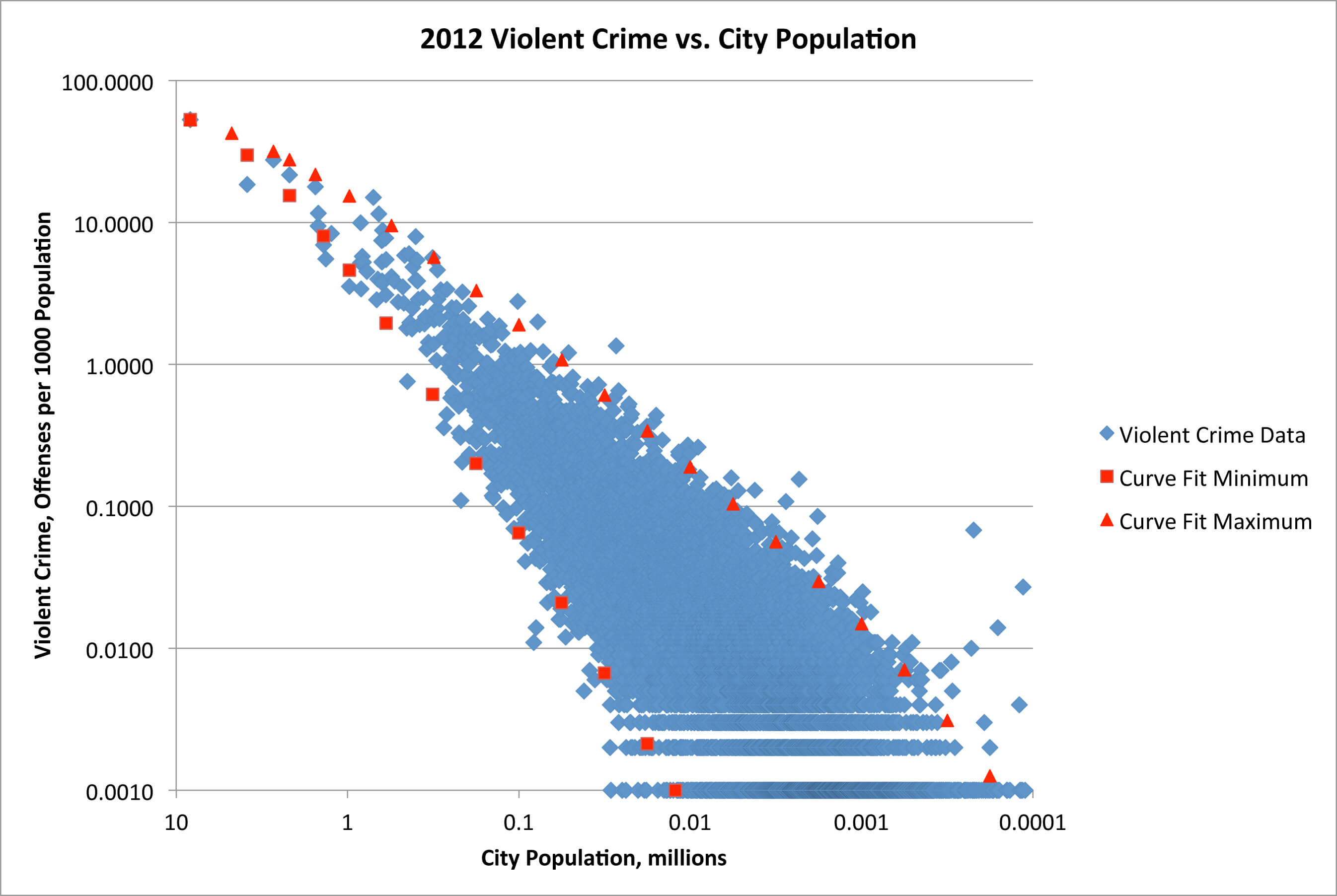 The blue data points describe violent crime per 1000 persons for 9,476 US cities, so numerous that they overlap to form a solid band. What’s amazing is that almost all – 99% to be exact – of the data points lie between two well-defined boundaries. Evidently, for any size city there’s a minimum and a maximum violent crime rate that 99% of the cities always fit between. There’s a best case and a worst case, and almost no one departs from those limits. The red data points identify maximum and minimum lines that outline the blue band.

For example, consider a city of 100,000 inhabitants. It will have between 0.065 and 1.9 violent crimes per thousand people per year. That’s a pretty big range, about 30 to 1. There are many factors that will push a city up or down within this range, factors that were discussed in Part 1 of this post.

I claim that where a given city lies between the minimum and maximum limits is a valid measure of how good a job that city is doing at controlling crime, given its size. I’m going to define a City Crime Rating of 0% if the city is right at the top of the range, and 100% if it’s at the bottom end, that is, if it has about as little crime as it’s possible for a city of its size to have. This definition makes the Crime Rating a sort of quality rating, measuring how well the city is controlling violent crime. A city that is midway between the minimum and the maximum crime rate will score 50%. A few cities will lie outside the boundaries, so some scores may be over 100% or less than 0%.

Note that the largest city, which is of course New York City, lies right where the blue band comes to a point: in a sense, New York is both the best it can be and the worst it can be. As a result, we have no consistent way to give New York City a crime rating score in comparison to other cites – it’s a special case of its own.

What does the data tell us? One thing we might look at is how uniformly cities are distributed from “good” to “bad.” This table summarizes the city crime ratings by city size: 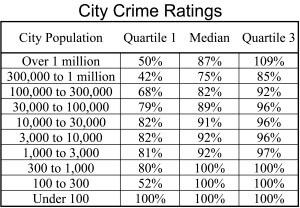 What we might call a “typical” city is the median, the city that is right in the middle of its peers. And the typical city is seen to have a crime rating of 75% or better. In other words, most cities do a better-than-middling job of controlling their crime. In fact, for cities under 1,000 population, the typical city scores 100%, just about as good as it can be. The most troubling cities are those between 300,000 and 1,000,000 population – a quarter of those cities get 42% or less crime ratings.

You may be wondering how your city measures up. If you live anywhere in the 49 States excluding Hawaii, your city is probably on the list! Here are two different PDF files if you’re interested:
– The 100 largest U.S. cities, in order of size (City Crime Ratings, 100 Cities)
– Crime ratings for 9,476 U.S. cities, arranged by State and city name (All US CIty Crime Ratings) (warning: this is a 202 page list!)

If you can’t find your city here, its crime reports may be consolidated with a larger city, or handled by a county sheriff’s department and not listed here.

If you leave aside the District of Columbia (rating 38%) which is not strictly speaking a state, the state median city crime ratings range from 62% (South Carolina) to 97% (Connecticut, Rhode Island and South Dakota). The state-by-state city crime rating seems to have little correlation with any other factor you might think of: median city size, political party or NRA approval rating.

In general, city crime is a complicated phenomenon that no one truly understands. Nevertheless, several things are clear:
– City crime depends overwhelmingly on local factors; it can be measured, and can be correlated with things like poverty, but it can’t really be predicted.
– Big cities have more crime per capita than small cities. If you want access to big-city amenities, search out its safe neighborhoods, or live in a small city nearby.
– For any given city size, some cities do a much better job of controlling city crime than their peers; the crime rating gives a measure of how well they perform this task.

The last time you chose a city to live in, how important to you was city crime relative to other factors?

Appendix (only if you want the details!):

The FBI city crime data omits certain cities because they do not report according to the Uniform Crime Reporting (UCR) system. For this blog I have supplemented the FBI data as follows:
– UCR defines rape as having a female victim, but Minnesota also includes rapes where the victim is male. I have added the Minnesota rape data to the FBI statistics.
– The FBI omits Chicago rape and arson data as not following UCR; I have added Chicago data from www.city-data.com, extrapolating 2012 from the 2009-2011 statistics

Since rape is typically under 10% of violent crime, the total violent crime numbers with these corrections should be fairly accurate. The FBI also omits city data for the State of Hawaii; so far as I can find, Hawaii UCR reports only compile city crime data by county, not city, so I have no way to include Hawaii in the data base.

The FBI city report (Table 8) lists 9,489 cities plus the Baltimore Sheriff. Ten cities are missing one or more violent crime numbers because the FBI determined that those numbers were overreported, underreported, or reported not following UCR guidelines. A few more cities are missing from the Minnesota data base or have missing FBI data. After correcting the data, the total table contains 9,476 cities with populations ranging from 5 (Tavitock, NJ) to 8,289,415 (New York, NY).

Because the city crime data covers such a range of values, I have found that the most efficient way to display the data is on a log-log scale, in which violent crime offenses per 1000 persons are plotted as a function of 1 divided by the city population in millions. To permit plotting on a logarithmic scale, cities with 0 offenses were credited with 1 offense for plotting purposes.

To derive crime ratings we note that almost all the data lies in a solid block, with only a few outlier data points. I temporarily removed the outliers, 24 in all, and performed a least-squares fit to a formula describing the upper and lower limits of the data. The simplest formula that gave a good match to the data was of this form:

The best-fit parameters were found to be:

Over 99% of the total violent crime numbers have a computed crime rating between 0% and 101%; that is, 99% of the cities lie approximately between the minimum and maximum boundary curves.