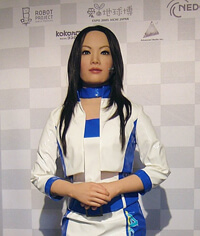 Science Fact: Robot life. A creepy-sounding phrase, one that gives us extra reason to be wary of technology.

We previously looked at how robots can assist us, specifically as servants or bartenders.  This post looks at an interesting push-pull in how we feel about them. The term “robot life” here deals with the advance of robotics technology to the point where it begins to resemble a living creature.

You may say, science fiction stuff, Art, there are no robots in my life. Ah, but a robot may not look and whistle like R2-D2. What about the voice in your car’s navigation system that says “recalculating” so patiently when you disobey its instructions? What about Siri in your iPhone, or her many sisters (and a few brothers) in other smartphones? In fact, some definitions of robots are so broad that they include your garage door opener and most household appliances.

These are machines and we have become comfortable at dealing with machines. It’s fascinating and also scary to see what happens when the machines look and act more like human beings. Robot life, if you like.

Our affection for other humans is deeply ingrained. Some like to think of a “primitive brain,” the inner part of what’s in our head, that urges us to find food, to escape predators and especially to find a mate. Others pooh-pooh the idea that any part of our brain remains primitive or ancient. However, even they they would agree that our advanced and contemporary desires and feelings also include the basic needs of all animals, in fact of all life.

Here’s an example: human beings tend to be physically attracted to other humans who are “almost but not quite” symmetric, that is, whose left and right sides are approximately mirror images. Symmetry is also a standard cue in the animal kingdom as a measure of health and fitness, as shown for example by barn swallows. Gazelles and antelopes may lose their symmetry by losing a horn in battles for a mate. I was shown such an unlucky quadruped at the San Diego Zoo Safari Park and was told that the females were not interested in him because of his missing horn.

Symmetry is only the most obvious of many cues that we use to judge physical attractiveness and, beyond that, “humanness.” Many people have an instinctive aversion to someone who does not appear to fit all our expectations of a normal human. This normal response is exploited for entertainment by zombie movies but presents very real problems to amputees striving for social acceptance.

A robot is not a person and (at least in the present state of technology) is not believed to “feel” emotions. In fact, the very idea is so far fetched that the Onion wrote an entertaining “news article” about MIT developing a robot capable of feeling lust. Although robots may not feel a need for social acceptance, researchers on robot life would like their creations to be accepted as team members by humans.

Here’s why roboticists strive for acceptance of their creations: Robots have done well with programmed actions such as automotive assembly. However, there are many less-predictable situations where robotic helpers could be a great help to a team of humans such as: fire-fighting; emergency rescue; police-criminal confrontations; repair work outside a space station; underwater search and many more. To contribute optimally, robots need to be accepted for their abilities and trusted to perform reliably by the human team members.

Robot life researchers have found that people have a more positive opinion of their robotic vehicle assistant if it seems more human. The researchers believe that human-robot communication and collaboration can be enhanced if the robots have personalities and show responses that humans can interpret as emotions. This works well when the robot is a cuddly toy such as those being developed in Singapore. However, robot life is attempting to move far beyond robotic pets to simulate humans both in behavior and in appearance:
– Behavior: Siri is a step forward in natural language understanding whose futuristic end point was shown in the 2013 film Her, in which a lonely man falls in love with his computer’s human-like operating system.
– Appearance: The early Disney “audio-animatronic©” figures were pretty convincingly human from a distance. Robot life designers have recently been moving from humanoid robots having a general human shape toward androids with flesh-like skin.

When you combine behavior and appearance you can come close to imitating robot life. And when you do so, robots enter that same area of revulsion and aversion that the zombies live in: being close to, but eerily not quite, human. There are some creepy examples around:
– Artist Jordan Wolfson’s robotic dancer that follows you with its eyes as it gyrates
– Computer-animated films that sometimes unintentionally achieve creepiness rather than realism
– Danish professor Henrik Scharfe’s robot clone created from a Japanese Geminoid robot
– Japanese roboticists have in many ways led the design of robot life. Robots like this “actroid” developed by Osaka University are comforting to some people yet very unsettling to others: 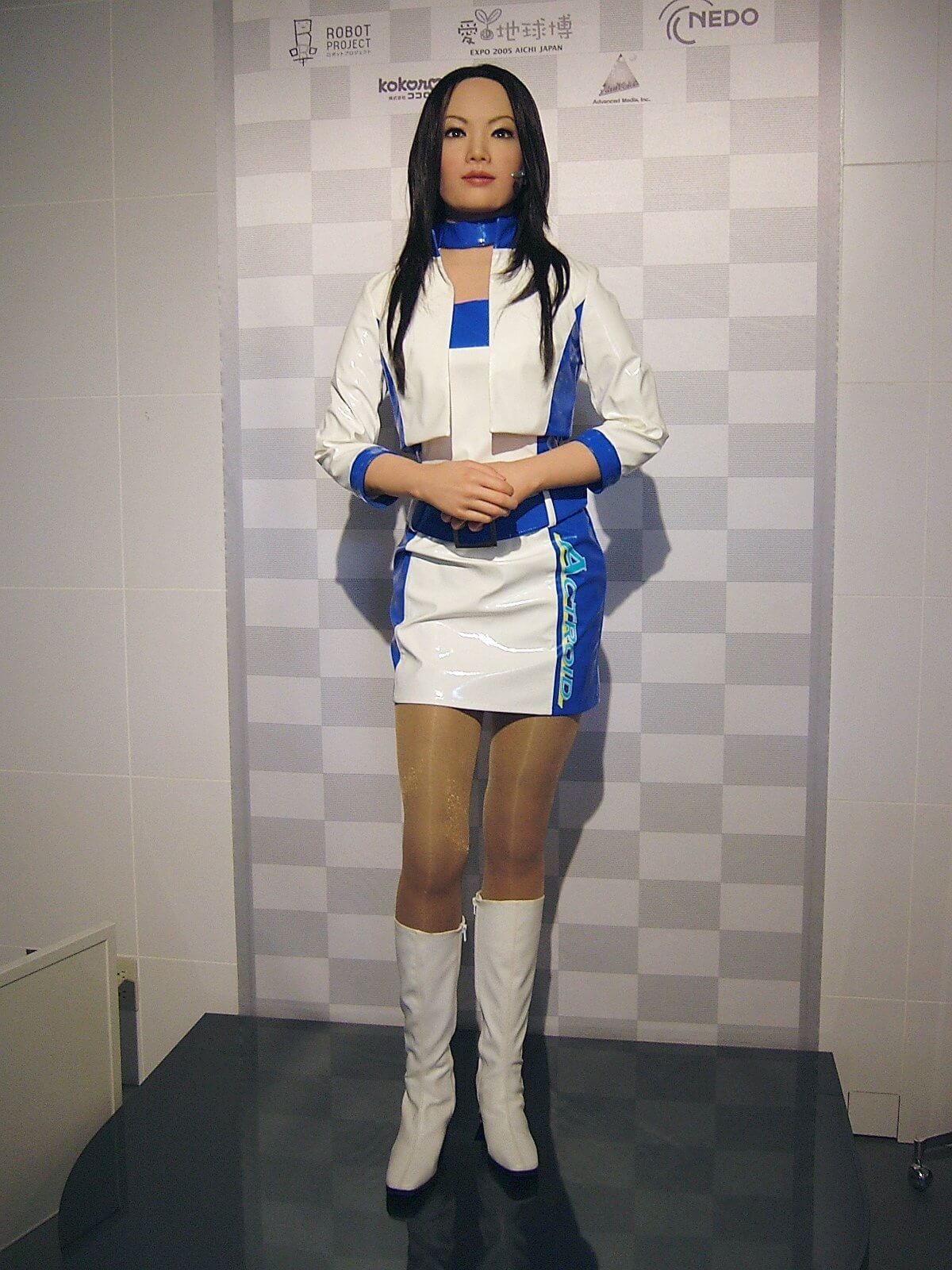 In 1970 Japanese roboticist Masahiro Mori called the creepiness of being “almost human” the Uncanny Valley. Here’s a drawing by Smurrayinchester of Mori’s chart: 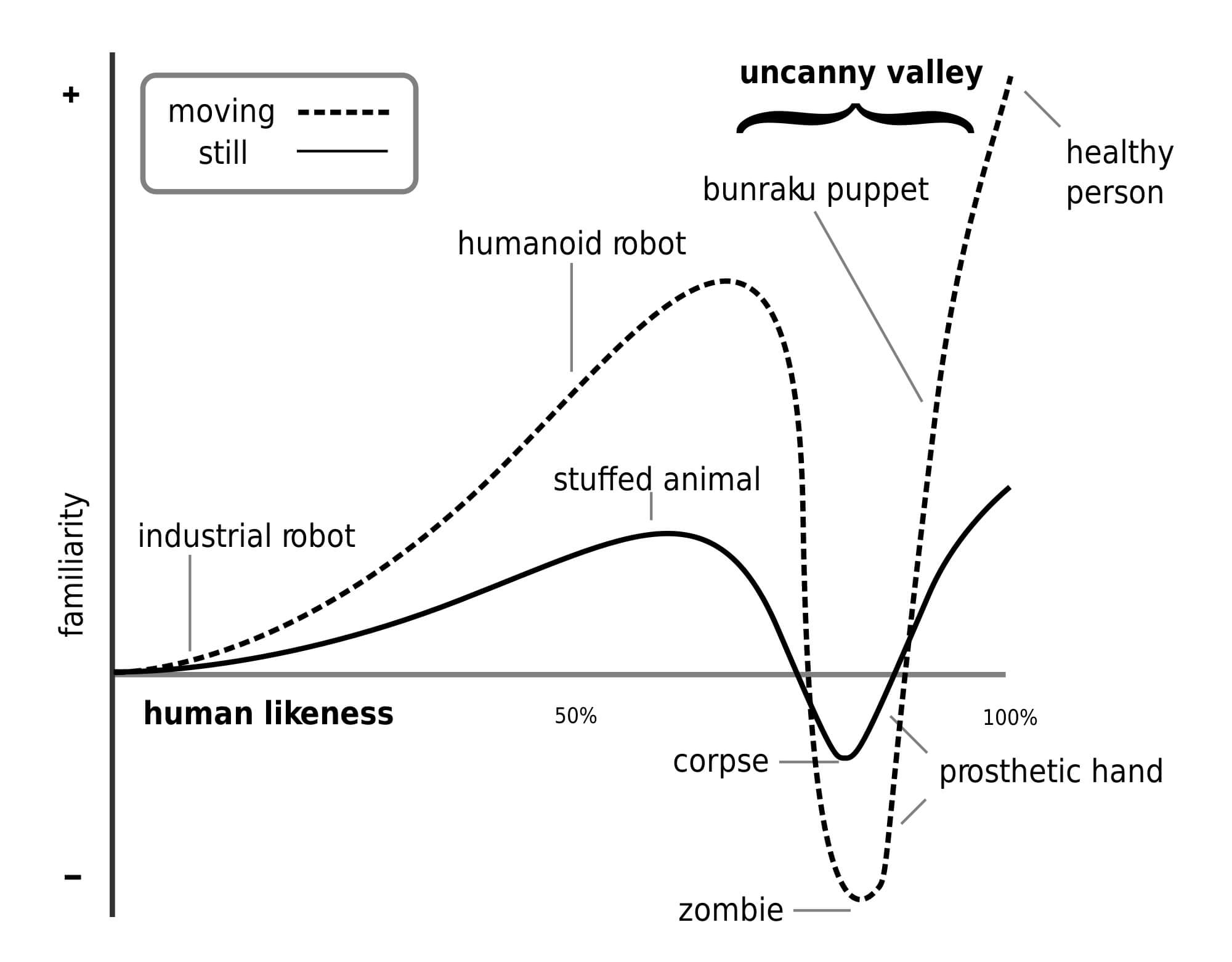 Mori’s diagram, following from left to right, says that as a robot looks and acts more like a human it passes through an in-between state in which it is “not quite human” and arouses revulsion akin to a corpse or a zombie. This aversion can happen with a robot that convincingly looks human but acts mechanically; a robot that acts like a real human trapped in a mechanical body; or a robot that almost makes the grade both in appearance and action.

[By way of explanation: the “bunraku puppet” labeled in Mori’s chart is a realistic puppet anywhere from half- to full-life-size. It is operated by black-clad puppeteers who are fully visible to the audience. The fact that real people are obviously operating the puppet apparently cues our senses as to its true character and keeps it from seeming too creepy.]

The Uncanny Valley has provoked a fascinating range of speculation and analysis, plus some criticism by those who believe that it doesn’t exist or that it doesn’t provide a useful concept. The most convincing analysis for me is that of computer scientist Prof. Roger K. Moore of the University of Sheffield. His study makes reasonable assumptions about how our brain handles the dilemma as it tries to match someone or something with our understanding of what a machine or a human should be like. When we are pulled both ways at once, the mental confusion plunges us into the uncanny valley. Moore is able to reproduce Mori’s curves by modeling the conflict that results when our sensory cues seem to contradict each other.

Science Speculation: Mori’s insightful and provocative sketch stimulated much discussion even before Moore showed how to quantify it. Mori is a very smart man and it’s probably not an accident that he didn’t try to over-define his graph. After all, it’s a two-dimensional description of a very complicated process by which we size up other people.

Mori’s way to think about robot life is reminiscent of another famous approach to the dilemma of robot vs human: In 1950 mathematician Alan Turing considered the question of whether machines can think. He proposed replacing that question with a different one: whether a computer can convincingly imitate a human being when you communicate with it. Versions of this idea have come to be called the Turing Test.

It may be some time before robot life becomes so convincing that a robot will seem to be human in the Turing Test sense. However, we may be closer than we realize. There’s evidence that the Uncanny Valley is not a rigid barrier: it depends on our past exposure to robots and our cultural background. The uncanny feeling arises when we process sensory inputs and arrive at contradictory conclusions, and how we process that information depends on our personal experience.

As we become more familiar with robots in everyday life we come to understand how they perform. We anticipate what they will and will not do and this removes much of the fear that drives our aversion. Roboticists, anxious to promote acceptance of their creations, are developing ethical principles for robotic design. It’s likely that robot life developers will follow such guidelines. As they do our confidence in robot life will be enhanced and the Uncanny Valley may mostly disappear.

Is robot life becoming a factor in your life? Have you personally encountered a robotic device that seemed creepy to you?