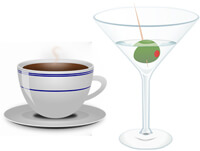 Science Fact: Healthy food is in the news this month, and it’s not tofu and quinoa. Articles based on scientific studies give a boost to the health-giving properties of two popular beverages: coffee and alcohol. And there’s new evidence about organic foods as well.

Coffee consumption dates at least from the 15th century. The beverage became a subject for controversy in the 17th and 18th centuries as coffee houses became common in Europe and Asia. Coffee houses provided a venue where men of all backgrounds might meet and discuss politics while drinking a stimulant. Being opposed to populist activity of all kinds, royals were alarmed. They responded by vilifying or even banning the consumption of coffee.

Today we think of coffee as a source of the stimulant caffeine. However, in fact it is “a very complex beverage with hundreds and hundreds of different compounds in it,” says Harvard’s Dr Rob van Dam. Moreover, coffee is something of a health food or healthy food. Its benefits are not available from artificial sources of caffeine (soft drinks or “stay awake” pills) nor other natural caffeinated beverages (such as tea).

The most recent article quotes stories from a history of coffee in the U.S. (Uncommon Grounds). The original version of this story referenced a much more detailed 2013 article, 9 purported health benefits of drinking coffee. However, its place on their website has been taken by another article on coffee as a health food, More proof coffee might actually be good for you.

A Caution About Coffee as Health Food

I must alert you that many studies look for association between coffee and health. However, they are usually not controlled studies. Moreover, mere association does not prove that coffee causes the improved health that was observed.

I’ll quote the results that I found most interesting:
– Coffee may fight depression: NIH and AARP found that those who drink four cups of coffee a day were ten percent less likely to be depressed.
– Drinking coffee may protect against suicide: Harvard found that two to four cups of coffee per day reduce the risk of suicide by fifty percent!
– Coffee may be good for your liver: Those who drink a lot of alcohol are twenty percent less likely to develop alcoholic cirrhosis if they also drink one cup of coffee per day.
– Coffee may help you temporarily lose weight, by speeding up your metabolism.
– Drinking two cups of coffee boosts athletic performance.
– Coffee drinkers have a thirty to sixty percent lower risk of Alzheimer’s, Parkinson’s and dementia compared with coffee abstainers.
– Coffee with caffeine temporarily boosts your mental performance.
– In addition, coffee with caffeine may help prevent skin cancer.

If these tweak your interest, you might also enjoy Coffee Abode’s compilation of the pros and cons of coffee.

And here’s the most important fact: coffee is enjoyable! However, before you say “I’ll drink to that” and rush off to brew a pot of java, let’s talk about another important health food: booze!

Liquor as a health food is a lot more controversial. After all, the perils of alcoholism are well known. Over-consumption shortens the life of the drinker. More critically, destroys the lives of others when the alcoholic drives, or interacts with other people.

Therefore, it was surprising when scientists learned that moderate consumption of alcohol is good for your heart. This is not just a matter of association. Studies have shown that moderate amounts of alcohol promote cardiovascular health. The proposed mechanisms for this effect are improved cholesterol profile, decreased clotting and other factors. In this sense alcohol can qualify as a health food just like coffee.

Despite the evidence in favor of moderate consumption, drinking can easily get out of control. For this reason, physicians are completely unwilling to recommend that anyone start drinking for his health. Nevertheless, for those who already drink, and don’t plan to stop, how can we gain the benefit without the risks?

Gaining Just the Benefits of Alcohol

The Wellness Newsletter from UC Berkeley, which is often a great source for medical guidance, says that these are the key factors to get the benefits of alcohol:

– Avoid “binge drinking”: Drinking a little alcohol regularly can be good for you. However, drinking the same amount per week or per month but only on Saturday night is bad for your health and also raises your risk for alcoholism.

– When possible, eat food while you drink, to slow the absorption of the booze.

– Drink “smart”: Sip your drink. Intersperse alcoholic drinks with non-alcoholic ones (we call this a “rinse cycle”). Move around so you are aware of the effects on your body. And don’t drink when you have also consumed medicine.

– Drink “moderately.” In the U.S. the usual advice is no more than one drink per day for a woman and two drinks per day for a man. This misogynistic-sounding advice is based on women being smaller and having less body water to dilute the alcohol. For those reasons, each drink has a much larger effect on their body’s systems. And what, you might ask is a “drink”? It’s one-half ounce (fourteen grams) of pure alcohol, which is the amount of booze in 5 ounces of wine, 12 ounces of beer or a 1.5-ounce shot of 80-proof liquor. Drinking more than “moderately” brings many health risks, including cancer of mouth, throat, esophagus, liver, pancreas, colon and breast.

The Biggest Risk of Alcohol

However, the following is not a joke: If you drink anything at all, do not drive. The numbers are pretty scary. Here’s an example: a Brown University website helps you estimate how each drink affects your blood alcohol level, and how rapidly the level declines. A 175-pound man with average alcohol metabolism who has two drinks has a blood alcohol content of 0.05%. It takes three hours for this to decline to 0.005%. You may say, hey, what’s the problem? In the U.S. I’m safe to drive if I’m below 0.08%, right?

Wrong. Legal perhaps, but not safe. A recent UCSD study found that even 0.01% blood alcohol makes a driver 46 percent more likely to be held responsible for causing an accident than the sober driver they ran into. In other words, even a single drink measurably impairs your driving skill and your reaction time. It’s not surprising that most other countries have set much lower blood alcohol limits for safe driving. The ceiling is 0.05% in most of Europe and 0.03% in Japan. And the allowed blood alcohol content is zero in Brazil, Eastern Europe and some Arab countries.

If you don’t want to be a hazard both to yourself and to others, find a designated driver. If you can’t find one, then wait three hours after the first of your two drinks before you drive.

The third health food in the current news is organic food. Organic food is healthy food for two reasons, one of them old and one of them new:

The “old reason” for organic food is to avoid pesticides. Pesticides cause cancer, and this may be true even in low doses. Although there is no “threshold effect” below which pesticides do not cause cancer, researchers generally assume that pesticides pose an acceptable risk if they raise your risk of dying of cancer by only a tiny amount during your lifetime.

Generally speaking, I believe that it makes sense to avoid pesticides when we can. This is not an all-or-nothing proposition: you can choose a strategy that fits your preferences and your pocketbook:

– If you care and can afford it, try to buy organic.

– If you don’t want to go that far, at least buy organic when you purchase the Environmental Working Group’s “Dirty Dozen” of fruits and vegetables that have the highest pesticide residues: Apples, Celery, Cherry Tomatoes, Cucumbers, Grapes, Nectarines (imported), Peaches, Potatoes, Snap Peas (imported), Spinach, Strawberries, Sweet Bell Peppers, Hot Peppers and Kale/Collards. (Yes, I know that for some reason there are often thirteen or fourteen items on the Dozen list!)

The “new reason” for organic food is that it may actually be healthier for you. There have been conflicting studies through the years, but the New York Times has discussed a recent research study that found “substantially higher levels of antioxidants” in organic foods. Antioxidants, which are produced by the plant to ward off pests and disease, are thought to be good for human health.

The discussion above focuses on three “health foods” in the news: coffee, alcohol and organic food. It’s great to know that for the first two of these, something that people enjoy and want to consume is actually, in moderate quantities, good for them!

However, not everything that we enjoy eating is good for us. For hundreds of years both coffee and tobacco were prized in Europe for their health-giving qualities. Research has shown that coffee, up to four cups a day at least, is in fact a health food; however, tobacco is not a health food in any quantity.

Thus the joys of tobacco have now been banished to cigar lounges and the nostalgic pleasure of madrigals like this one by Thomas Weelkes (1576-1623):

Come sirrah Jack ho,
Fill some tobacco,
Bring a wire and some fire,
Haste haste away,  quick I say,
do not stay,  shun delay,
for I drank none good today.

I swear that this tobacco
Is perfect Trinidad-o;
By the very very Mass,  never never never was
better gear  than is here,
by the rood,  for the blood,
it is very very good,  ’tis very good.

If merely reading this poem doesn’t stir your heart, by all means listen to the Kings Singers performing it. Despite its political incorrectness, you may be inspired to acquire their CD All At Once Well Met: English Madrigals!

A question: What does “health food” mean to you?