Science Fact: Plants listen! They don’t have ears or brains. And they don’t have a nervous system, although they have internal communication systems that may play that kind of a role. Nevertheless, plants listen and react to specific sounds.

Let’s start with the science, then we’ll speculate on whether playing music would make your garden grow better.

The scientists are not playing Bach to roses. Instead, they’re looking at something more useful to the plant. They have discovered that plants listen to insects chewing on their leaves, or the leaves of their neighbors. When the plants hear a caterpillar munching away, they rev up their chemical defenses so they will taste nasty and repel the predators.

This fascinating work comes from Drs Heidi Appel and Reginald Cocroft at the University of Missouri in a journal article published this month and summarized by the New York Times.

The researchers studied thale cress, a flowering plant that grows wild many places, including Australia and Ireland. This plant is very popular with biologists because it’s small, it completes its life cycle in only six weeks, and its genome is completely known – in fact, it was the first plant to be completely DNA-sequenced. This poor plant, happily growing away, was then offered as food to a common pest, the Cabbage White caterpillar, which matures into the Small White butterfly. Here’s a photo of one of Appel and Cocroft’s thale cress plants, with a caterpillar ready to have lunch (all photos and videos are credited at the end of this post): 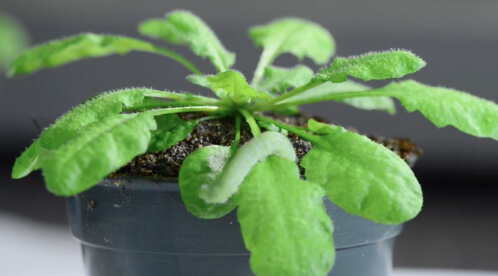 The researchers used a laser reflection microphone (laser Doppler vibrometer) to record the sound of a caterpillar chewing away, as seen (and heard) in this video (which may also be directly accessed at https://www.youtube.com/watch?v=ndfo2NiaEIE&feature=youtu.be):

The researchers found that when a plant heard a recording of caterpillars munching, it seemed to “prime” the plant to protect itself: when a caterpillar then attacked that plant, the plant produced larger-than-normal amounts of caterpillar-repelling chemicals – mustard oils (glucosinolates) and plant pigments called anthocyanins. Plants that heard no recording, or heard the non-threatening recordings, did not produce extra chemical repellants.

Think about what this means. Plants listen to sounds. They hear them without ears. They understand them without brains. And they take action to protect themselves from the wild world around them!

It’s not just the leaf that gets eaten that fires itself up for defense. Leaves that are being nibbled on can communicate with other leaves in the same plant, and also with other plants through stems and roots. Plants also communicate with nearby plants through the air, by means that are totally unknown at this time and only a matter for conjecture.

This is one of those instances when Science makes a discovery that makes us say “Wow!”

Every discovery leads to more questions. For example:
– Question #1: How can plants distinguish so clearly between types of sounds? What is the mechanism? There have been attempts to formulate a theory for plant “nervous systems” and those have been unenthusiastically received. Despite some speculative ideas we have not found good evidence that plants have something like a “brain” that can process signals and identify different kinds of sounds, such as animals do.
– Question #2: How does response to sound or vibration vary between different plants? Did Appel and Cocroft happen upon the only plant and insect that displays this “intelligent” reaction? It’s more likely that they have instead discovered a phenomenon that is nearly universal in the domain of plants and their predators.

Science Speculation: The questions above go well beyond what we presently understand about plants. Let’s jump into full-fledged speculation, then finally come back to reality.

We’ll take a time-honored scientific approach and propose a couple of Hypotheses to guide our inquiry:
– Hypothesis #1: Since plants not only respond to sound but respond differently to different sounds, some sounds might either promote or impair the health of plants being cultivated by humans.

If Hypothesis #1 is true, it leads us to another question:
– Question #3: What specific sounds would help or hurt the plant? Can we describe sounds using categories recognizable to humans, such as music, noise or mechanical sounds? Or is it analogous to the case of tamarin monkeys: the music they love or hate just doesn’t compute in human terms.

Here’s another one:
– Hypothesis #2: Plant responses to different sounds evolved because it gave them survival or reproductive advantage.
And this leads to:
– Question #4: What elements in the environment caused sounds or vibrations to which plants evolved a response? Did these environmental signals continue for enough thousands of years that they could have affected the evolution and mutation of the plant genome and its expression?
– Question #5: If plants produce pest repellants when something eats them, does that mean that the innocent salad we’re eating is full of natural pesticides? Well, not quite. Although those anthocyanins are annoying to caterpillars, they are natural antioxidants found in berries and are thought to be good for human health and disease prevention.

Music in the Garden

We are deep in speculation territory here, so we can’t avoid mentioning music for your plants. There’s a famous 96-page 1973 book by Dr Dorothy Retallack titled The Sound of Music and Plants. She describes experiments she conducted at Temple Buell College (later Colorado Women’s College). Retallack set up six separate chambers with similar plants receiving the same amounts of water, light and nourishment. She played different types of music and found that plants would thrive or wither according to the music. In addition, plants would bend toward or away from the speakers depending on the music. She concluded that adagio (slow) movements of Baroque music and Indian sitar music enhanced plant growth more than other kinds of music.

Dr Retallack’s work is one of those dilemmas: a study which sounds as if it was conducted carefully, but which has not been embraced (or replicated) by the world of science. Nevertheless, her book has gained fame as the source for everyone’s ideas on what kinds of music are good or bad for plants. Her book is hard to find but there are many secondary discussions of her work:
– (article) Don Robertson, About Positive Music: The Plant Experiments
– (book) Peter Tompkins and Christopher Bird, The Secret Life of Plants: a Fascinating Account of the Physical, Emotional, and Spiritual Relations Between Plants and Man
– (article) Yannick Van Doorne, Music for plants

You can even find an article recommending ten specific music selections to make your plants happy:
– (article) Maxine Nelson, Top 10 Songs for Plants and Gardens to Thrive on: Baroque & Indian Sitar Music Has Been Recommended as the Best Types for Your Plants & Gardens

And of course there are the nay-sayers who quote studies saying, it just ain’t so:
– (article) Matthew David Fleischacker, Music Can Help Your Plants Grow….seriously?

Back to the Real World

Let’s close the circle back to the actual science.

It’s incredible that Appel and Cocroft have demonstrated that plants listen to sounds, interpret the sounds and react to protect themselves. And what they discovered makes good sense from an evolutionary perspective, because the plants’ reaction has survival value.

However, we desperately need a proposed mechanism to explain what’s going on. I’m uncomfortable using an animal analogy that may not be appropriate, but here goes: we’d like to understand how plants store and process information, learn responses, and pass that information along to their progeny.

OK, if plants listen and are smart enough to act on what they hear, does that mean that they like human music? It’s difficult to account for that unless we can explain how developing a taste for Bach and Ravi Shankar have enhanced the survivability of plants for thousands of years before those musicians were born.

There may in fact be “plant music,” specific sounds that cause plants to thrive, as some folks would like to believe, and as captured in at least one US patent application. However, it would be amazing if specific categories of music that have human labels turned out to accidently match the favorite tunes and Top Forty of the plant kingdom!

The University of Missouri work has opened a new area for scientists, and given hope to pseudo-scientists as well. It’s amazing that a research project can make an impact in both worlds, and who can say where it may lead?

Plants listen and hear sounds around them. Have you ever talked to your plants? Have you played music for them? Did you see any results?