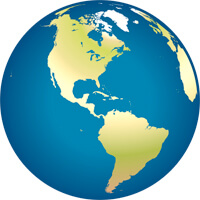 Science Fact: The discovery of America by Christopher Columbus is one of the few historical “facts” that sticks with most people long after they have forgotten the Magna Carta, Beowulf and the invention of the cotton gin. The stickiness of this knowledge is aided by some doggerel that we have all heard:

which is the front end of a much longer and not every exciting poem.

Since we “know” of Columbus’ discovery of America, we might be surprised to see a headline like the following: Was America ‘discovered’ in medieval Central Asia? This news article summarizes studies by Prof S. Frederick Starr, chair of the Central Asia-Caucasus Institute of Johns Hopkins. Starr mentioned the discovery of America in a well-respected history book (Lost Enlightenment: Central Asia’s Golden Age from the Arab Conquest to Tamerlane). He went into more detail at an Asian conference in May and in a History Today article this month.

Starr studied the writings of Al-Biruni, an amazing eleventh-century Arab scholar who was born in Kath, Khwarezm, south of the Aral Sea and died in Ghazni, which is now in eastern Afghanistan. Biruni was a Persian Muslim and a polymath, one of the leading scientists of his time.

One of Biruni’s numerous accomplishments was to measure the radius of the Earth. He was astoundingly accurate, obtaining a quantity only 0.25% less than the accepted modern value. He reportedly constructed a globe five meters (16.4 feet) in diameter, which he populated with all the known countries and continents of his time. The known world only covered two-fifths of the globe, and according to Starr:

Biruni argued that the same forces that gave rise to land on two-fifths of our planet must have been at work in the other three-fifths. He concluded that one or more landmasses must lie between Europe and Asia, writing, “There is nothing to prohibit the existence of inhabited lands.”

Thus Starr asserts that although Biruni never set eyes on America, he also deserves “to wear the crown of discovery” based on his prediction that the American continent or continents should exist.

If this much credit to Burani seems like a stretch, consider the following. Since the time of Aristotle, learned people had assumed that man was the center of a perfect geometrical universe. This human-centric thinking biased them in many ways, and helped them believe that the entire land mass of the world consisted of what was already known. Thus from 600 BCE until the time of Columbus, map-makers drew the known continents as surrounded by nothing but an immense empty “world sea.” Biruni had the independence of thought to recognize the hidden assumptions of his peers. His logical rejection of the empty world sea was radical and insightful for its time.

So should we award Biruni partial credit for the discovery of America? The Oxford Dictionary gives definition 1.2 of “discover” as “be the first to find or observe (a place, substance, or scientific phenomenon).” As far as we currently know, Biruni in 1037 was the first person to assert that the world sea probably contained other continents. Thus he can claim some credit for asserting the discovery of America by logical prediction, although he never laid eyes on it.

Meanwhile, the Norse Vikings were not only visiting the Americas but establishing colonies there. Permanent colonies in Greenland in the 980s were followed by a series of visits to Newfoundland and points further south. The best evidence of these colonies are the excavations at L’Anse aux Meadows, Newfoundland, which have been carbon dated to 1020 CE plus or minus 30 years. So if the discovery of America means to find and actually set foot on the place, the Vikings may also claim credit. The Viking voyages and settlements were recorded only in oral tradition. They were eventually written down as the Icelandic Sagas in the fourteenth century, specifically in the Saga of the Greenlanders (Grænlendinga saga) and the Saga of Erik the Red (Eiríks saga rauða). The Viking adventures were not widely known in Europe until the eighteenth century so their travels did not stimulate a rush of exploration. Thus if the Vikings made the discovery of America, their discovery does not seem to have had a lasting effect, either on the native Americans or on the Norsemen.

When we traditionally think of the “discovery of America” we lean toward another definition. Biruni’s deduction, speculation, assertion – whatever we choose to call it – was not widely publicized, and was not acted on. The Viking voyages were little known and of uncertain factual content.

In contrast, Columbus’ voyages were notorious and world-renowned, triggering a “gold rush” of exploration by all the sea powers of Europe. Columbus not only established settlements and documented his voyages, he initiated trade with the Americas, bringing back gold, tobacco and prisoners (slaves).

Ironically, Columbus’ discovery came about through accident. He used an incorrect value for the size of the earth and drastically underestimated the distance west from Europe to Asia. Nevertheless, in terms of social impact, both good and ill, his discovery of America is rightfully given great credit.

Science Speculation: All these “discoveries” lose some of their luster when we consider that the lands thus discovered were not empty of people! Which brings us to a final category:

Both North and South America had been discovered by humans who settled there well before 1000 CE. Wikipedia gives a good summary of the timeline of American habitation and summarizes the sciences that are unraveling its history: archaeology, anthropology, genetic analysis and linguistics. It seems that people migrated from Siberia to Alaska around 40,000 years ago. At that time, and continuing until about 10,000 years ago, there was a land bridge across what is now the Bering Strait between Asia and North America.

Once people arrived in Alaska, their diffusion throughout North and South America was inconvenienced by the most recent stage of glaciation. This ice age lasted between 26,000 and 13,300 years ago and the glaciers covered the majority of western and northern North America. However, throughout this time period people could either migrate south along the West Coast or along an ice-free inland corridor.

In addition to the well-accepted land migration through Alaska, there are many claims of much earlier contact between Asia and the Americas. Many theories of earlier settlement have been proposed, inspired either by historical documents, or by observed similarities in artifacts, habitations, place names, languages, human DNA, plants and animals between the Americas and other continents. A prominent example is Gavin Menzies, who has written books and vigorously promoted his theory that the Chinese visited the Americas for thousands of years, with the last contact occurring about seventy years before Columbus.

Scholars have systematically dismissed such claims for lack of convincing evidence. However, the door is not closed on these theories.

We will probably learn much more about the settlement history of the Americas from DNA and linguistic analysis. This work may in turn inspire archaeological exploration to find physical evidence that can be dated. However, it won’t be easy. Migrants who arrived by water would probably have settled near the coast. Twenty thousand years ago sea levels were 120 meters lower than today because so much water was retained in the glaciers. Thus archaeologists may have to look beneath hundreds of feet of ocean water for evidence of early visitors and settlers.

Eventually we may discover that there were multiple waves of travelers who visited, traded with and colonized the western hemisphere for thousands of years prior to the Vikings and Columbus. Once we know just what to look for, their influence should be discernable in the culture, language and DNA of present-day native Americans, and in our present mix of endemic plants and animals.

Eventually science may want to assign many “crowns” for the discovery of America!

The discovery of America by Columbus and his shipmates clearly had tremendous influence on the settlement and exploitation of the Americas. How much additional credit should history books give to other discoverers?