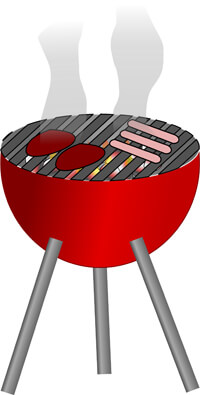 Science Fact: Barbecue doesn’t make an appearance in this great ‘60s song, but perhaps it ought to:

Roll out those lazy, hazy, crazy days of summer
Those days of soda and pretzels and beer

After all, meat and veggies sizzling on the barbecue is a great tradition. For many people, this kind of healthy food is the ideal blend of Paleo diet and civilized comfort.

Unfortunately, like many good things, there’s a mosquito in the ointment. The flaring of fat drips and the grill marks on the steak are packed with cancer-causing chemicals. If you want to be technical the bad actors are PAH (polycyclic aromatic hydrocarbons) and HCA (heterocyclic amines). The National Health Service’s Report on Carcinogens and many other sources so label them. Each of them is a family of dozens of related chemicals, most of which the experts believe are bad for you.

Here’s a perfect example of an angel married to a demon: we love our barbecue but we hate to swallow those carcinogens. When scientists see a problem like this, they want to solve it. So the topic for this post is, how can we enjoy our barbecue and at the same time reduce its downside risk?

We have to begin with, where does the bad stuff come from? The National Cancer Institute says:

HCAs are formed when amino acids (the building blocks of proteins), sugars, and creatine (a substance found in muscle) react at high temperatures. PAHs are formed when fat and juices from meat grilled directly over an open fire drip onto the fire, causing flames. These flames contain PAHs that then adhere to the surface of the meat.

In general, PAH and HCA form when meats are cooked at any temperature over about 300 degrees Fahrenheit – the higher the temperature, the more chemicals arise.

See those black grill marks? That soot where the fire flamed up? Those well-done parts of the meat? Some of the darkness comes from carbon (soot) produced by incomplete combustion. And carbon itself is unlikely to kill you. However, the dark areas are also rich with PAHs and HCAs, which your body would like to avoid.

Fortunately, scientists enjoy barbecue as much as anyone else, so they have been studying the problem. If you would like to enjoy your barbecue but reduce the carcinogens in your diet, science has some excellent advice for you:

Many people marinate meat and fish before cooking in order to enhance its flavor. Remarkably, marinades also greatly reduce the bad chemicals caused by cooking. You can marinate as little as ten minutes and still get a benefit, although most studies use marinating times of one to six hours.

Researchers in Portugal and Spain led by Prof. Isabel Ferreira found PAHs reduced up to 50% by four hours of a beer marinade. “Black beer” (a dark-colored beer that gets its color from roasted malt) was much more effective than Pilsner.

Wine is Fine, Any Time

Other effective marinades contain an acidic base, such as vinegar, citrus juice or mustard.

Marinades seem to suppress carcinogens because of their phenols and polyphenols, which are natural antioxidants occurring in beer, wine and brightly-colored fruit.

The most detailed data seems to be for beer marinades: perhaps there’s a dedicated fraternity of beer-drinking scientists who enjoy barbecued meat. The highest phenols and presumably the greatest health benefits come from ales, which are better than lagers, which in turn are better than light and nonalcoholic beers. In addition, the darker-colored beers (brown ales, bock and abbey ales) seem to have the edge in potential health benefits.

As long as you’re looking for a healthy beer, whether for marinating or for quaffing, microbrews are said to have more hops and hence more polyphenols in comparison with mass-produced beers. And, there’s more: are you passionately dedicated to drinking the healthiest possible beer? There’s a blog, not for the faint of heart, that tells you step-by-step how to brew your own beer with the maximum of antioxidants.

If you want a healthy marinade, the most important step is to reduce or, better yet, eliminate the sugar. Just as non-sugary marinades decrease PAHs and HCAs, sugar increases them, partly because the sugar chars easily. One research study showed that a commercial barbecue sauce containing sugar increased the formation of HCAs in grilling.

What if you really love the flavor of that tangy sugary commercial barbecue sauce? No problem. Marinate and cook without the sugar, then after you take the food off the grill, slather it with all the sauce you like. Just remember that there are other reasons, including the risk of diabetes, not to consume excessive amounts of sugar.

Only You Can Fight (Barbecue) Fires

Flare-ups, caused by fat dripping onto your heat source and catching on fire, increase the carcinogens deposited on your food. You can do a lot to protect yourself from this problem:
– Choose leaner cuts of meat when possible – steaks or lean burgers rather than sausages or ribs.
– Remove obvious chunks of fat and skin before you cook.
– If a flare-up occurs, move the meat to one side, out of the flames, until you can douse the flames or they burn themselves out.
– It’s not only flames that you should control: smoke also deposits bad chemicals on your food.

Higher temperatures facilitate the formation of carcinogens. You can improve the healthiness of your barbecue if you:
– Grill longer at a moderate temperature rather than quickly over very high heat. You’ll find the heat easier to control with a gas grill rather than a charcoal fire.
– Keep the grill surface at least six inches from the heat source.
– Turn the meat as it cooks to reduce the maximum temperature it reaches.
– Try to avoid charring the food.

Yes, to have healthy food you have to cook it adequately. The US Department of Health and Human Services recommends an internal temperature of 145 degrees Fahrenheit for solid beef, pork and fish; 160º for ground beef (because it “usually contains bacteria”); and 165º for poultry.

145 degrees in that steak means medium rare, and that’s a good time to stop grilling it. If you continue until the steak is well done, it will have 4 times as much PAH in it. Chicken is even worse, with blackened grilled chicken having 200 times as much HCA as chicken cooked just to 165 degrees.

What if you really love the flavor of that crusty grilled outside? Take a tip from the restaurateurs. The vice president of Ruth’s Chris Steak House gave some good advice that was published on a now defunct website. Since I can’t currently find the article online, I have attached it here as Indoor Grilling Tips from Ruth’s Chris Steak House.

Here are the key points from Ruth’s Chris:
– Choose a high quality center cut steak at least 1.5 inches thick.
– Marinate it for 10 minutes at room temperature.
– Use a very hot grill or fry pan to sear the outside, 1.5 minutes on each side.
– Finish the cooking in an oven at 400 degrees Fahrenheit for about 12 minutes.

If you follow this approach, the meat will spend only a short time on the grill at high temperature; thus there will be fewer PAHs and HCAs compared with cooking it only on the grill.

For additional safety, trim off any burned edges before serving. If you bake or pan fry, you’re better off not to make gravy from the pan drippings. If you can bring yourself to make gravy from beef bouillon instead, you can make it appear and taste darker by adding a glug of Maggi Seasoning.

Science Speculation: A discussion of healthier barbecue would be incomplete without a couple of caveats:

Consuming red meat and, especially, processed meat that contains nitrites, brings a risk of cancer regardless of how it’s prepared. As the European researchers say, “the best way to reduce your risk of cancer from eating red and processed meat is to eat less of it overall.” That’s a good reason to eat more vegetables and fish! With that in mind, may we recommend:

Variety is the Spice of Barbecue

Fruits and vegetables are less likely to form carcinogens at high heat, and they are healthy in their own right. Once you have the grill fired up, you can make veggies very tasty by grilling them with a bit of olive oil. Thick slices of onions, zucchini, eggplant, bell peppers and tomatoes are recommended, as well as corn on the cob.

Is barbecue a big part of your summer? How healthy do you need it to be?