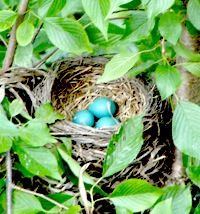 Science Fact: Sunlight is necessary for human health and for almost every living thing on the planet. Sunblock also turns out to be a universal need. In particular, recent research shows that “chicks need sunblock,” as explained below.

The Goldlocks story is famous for its rhythm of threes: “Too much! Too little! Just right!” It’s also famous for its illustration of the virtues of moderation, the middle path.

“Everything in moderation” is our modern way to express a bit of wisdom with a long history. The Analects of Confucius quote him as saying (around 500 BCE): “to go beyond is as wrong as to fall short.” (Analects, Book 11, Chapter 15) Similarly, around 440 BCE the Oracle of Delphi in ancient Greece reportedly advised: “nothing excessively,” meden agan (μηδὲν ἄγαν). Many prefer the tongue-in-cheek version “Everything in moderation, including moderation.” Success has many parents, therefore this version has been attributed to many wits from Petronius on.

We live our lives in a Goldlocks world, where moderation is rewarded. There are many examples where a little bit of something is good, and too much will kill you:
– Alcohol seems to be good for you in moderation; but too much is a deadly poison
– Breathing too little oxygen will kill you; but too much oxygen generates free radicals that damage heart and brain, and can cause collapse of the alveoli of the lungs.
– People can die of heatstroke; but can also die of hypothermia in the cold.

Back on the subject of sun, its lack and its excess, we are constantly reminded that too much sun is a terrible thing; however, some sun is desirable to avoid a vitamin D deficiency.

Sunlight is also needed by animals, who often don’t have vitamin supplements available to them. But too much can be deadly. Some recent research shows that chicks also need sunblock. And these are not the human type of chick, but baby birds. To be precise, not-yet-born baby birds.

In Europe, from the 16th century on private collections grew into natural history museums with immense collections of natural objects. These objects included not only stuffed birds of many species, but also their eggshells. So you’d think that with hundreds of years available to study bird eggs, people would have learned everything possible about the eggshell.

Not so. A team of six researchers from Australia, U.K., U.S.A. and the Czech Republic just published a study (Golo Maurer et al, First light for avian embryos: eggshell thickness and pigmentation mediate variation in development and UV exposure in wild bird eggs) of the eggshells of 74 species of wild birds. Their work was also summarized by BBC.

The research study clarified that the eggshell plays an important Goldilocks role in controlling the amount of light that reaches the developing bird embryo. Too much light, especially UV-B, can damage the chick’s DNA; however, some UV-B is needed for bone-building (calcium metabolism) and to kill harmful bacteria on the surface of the shell.

The bird eggshell is largely composed of calcium carbonate, which not only protects the embryo but provides calcium for its bone growth. Since the basic composition of the eggshell is the same, what are the variables that cause one eggshell to differ from another?
– Color (pigment) affects how much and what wavelengths of light are transmitted through the eggshell.
– Pattern affects light transmission but more importantly, in conjunction with color, provides camouflage to hide the eggs from predators.
– The reflectance (“shininess”) of the shell controls how much light penetrates the surface of the eggshell.
– The permeability or porosity of the shell material moderates the passage of air and moisture through the eggshell.
– Size of the eggshell largely depends on the species of bird; larger birds are able to lay larger eggs, and larger embryos grow into chicks that have a better chance to survive.
– Thickness of the eggshell affects not only its strength but also its light transmission and porosity.

With these few variables available, evolution has produced a broad variety of eggshells that are often beautiful. In addition, the measurements by the research team make a strong case for thinking of the eggshell as sunblock for the chick:
– A shiny eggshell allows less light to penetrate the shell.
– Birds that nest in covered places with low light produce eggshells that transmit light very well, to give the embryo the light it needs to develop; such an eggshell tends to be white or very pale in color. Examples of birds that nest in holes, burrows and cavities are hoopoes, little owls and green woodpeckers.
– Birds that nest in the open on the ground have eggs that must withstand strong sunlight; such birds, which include stone curlews, oystercatchers, Arctic skuas and nightjars, produce colored eggs that transmit much less light.
– Eggs with a longer incubation period (time to hatching) risk exposing the chick to too much sunlight; thus those eggs tend to be thicker and less transparent to UV light.

Thus unborn birds love the sun, and they also need and use a natural sunblock.

Science Speculation: Since chicks need sunblock just as much as we do, it’s fortunate that Nature has provided for them, at least until they hatch. These research results make good sense, but they also allow both practical application and prediction.

Poultry raising depends on having the right amount and right kind of light for adult birds. In fact, controlling the hours of light per day is essential for maturation of the birds, and the requirements are different depending on whether chickens are being raised for egg production or human consumption.

Since the eggshell seems to have evolved to provide “just the right amount” of light for the embryo, it’s clear that the amount of lighting is also important even before the chick is born, as studies have shown. However, most fowl breeding guides give much more attention to temperature and humidity: I only found one that mentioned the need for direct sunlight.

It’s well known that the world is passing through a period of climate change. There are arguments about how much of the change is human-caused and avoidable, and how much represents natural weather cycles. Nonetheless, change is occurring, as shown for example by the dates of bird migration and shifts of animal habitat ranges. As wild birds change their habits and home grounds, we can expect corresponding changes in eggshell coloration and other factors. Whether those changes can occur quickly enough to keep up with global warming will help determine which bird species thrive and which are threatened.

Our neighborhood grocery store usually offers chicken eggs in two shades of eggshell color: white and brown. Does this research suggest that one or the other type of egg is preferable?

Probably not. Chicken eggs, like most foods found in commercial markets, have been carefully developed through the years by egg producers interested in maximizing yield per laying hen and other economic factors. There’s no difference in taste or nutritional content between brown and white eggs, says Consumer Reports. A blog site suggests that brown eggs might have tasted better than white, before they started being produced commercially.

Most supermarket eggs are infertile, not intended for nor capable of hatching. However, commercial breeders also deal with fertilized eggs and hatch them to raise chickens for egg-laying or human consumption. It’s already known that different strains of egg-laying chickens require different living conditions. Based on the Maurer et al research article, it’s also likely that commercial hatcheries also adapt incubator lighting according to the type of chicken, using more light when they incubate brown eggs than white ones.

Do you prefer your eggs with a specific color eggshell, such as white or brown? If so, what’s the reason for your preference?