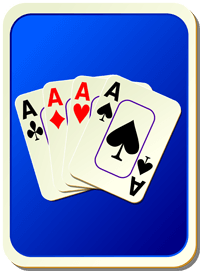 Science Fact: “ Tells ” are the unconscious tics that give away your deepest secrets – not just in a game of poker, but in everyday life.

Do you think you can keep a secret? Not from a careful observer!

And: Can you communicate nonverbally when you want to? Absolutely, yes.

There is confusion in terminology between “tells,” “body language” and the term that some prefer, “kinesics.” Here’s the usage that we recognize:
– The term “tells” applies to poker and other games to denote behavior that may reveal another player’s thinking. Tells may be unconscious and reveal information that can change the outcome of a game. Or, tells may be faked (“false tells”) in order to mislead another player.
– “Body language” is a popular term that describes both conscious and unconscious nonverbal communication. The concept is that even when you are not talking, your body has things to say!
– Some researchers prefer the term “kinesics” rather than “body language.” That is because nonverbal communication does not satisfy a linguist’s definition of what constitutes a “language.”

As noted above, nonverbal communication may be conscious or unconscious, that is, intentional or unintentional. If it’s conscious, it may be true or false depending on our intent. And if it’s unconscious, then it reflects what we believe to be true, which may or may not be factual.

Tells In Fiction and Fact

Mark Twain used the power of unconscious communication as a plot point in chapter 11 of Huckleberry Finn. Huck, in girl’s clothing, has stopped at a farmhouse seeking information. The woman there quickly perceives the “tells” that expose Huck’s deception:
– He tries to thread a needle by moving the needle, not the thread.
– He does too good a job of throwing a lump of lead at a rat.
– And he catches the lead in his lap by bringing his knees together.

Huck compounds his problem by forgetting whether his name is Sarah or Mary. Fortunately, he manages to contrive a story and leave without the authorities nabbing him.

Of course, this is just fiction. More in the real world is the polygraph (“lie detector”), a machine that inventors created specifically to detect falsehoods. It’s true that some studies show the polygraph to be reasonably effective when testing untrained subjects. Nevertheless, a person who has something to hide can train himself to deceive the device. In fact, there have been some notorious cases where the polygraph gave incorrect results, either exonerating a guilty person or implicating an innocent one.

The transparency of our innermost thoughts was evident in a direct and simple experiment many years ago, in 1960, at the University of Chicago (abstract, full article). The researchers filmed the eyes of six men and women, both married and unmarried, while they were shown a series of photographs. The video frames were then studied to measure the pupils of the test subjects’ eyes.

A previous experiment by others had shown that childless women prefer images of baby animals to adult animals of the same species, much more so than childless men. This preference holds whether the test subjects are married or unmarried.

Therefore, the researchers chose a series of photos that they thought would reveal strong differences between men and women. These were: a baby; a mother holding a young child; a “partially nude” man; a “partially nude” woman; and a landscape. Each photo was shown for ten seconds, a total of twenty times, with the same level of ambient lighting. The tests were repeated one day later on the same subjects.

The results, graphed in the chart below, show significant differences in pupil size. They are consistent with the idea that your pupils get bigger when you are looking at something that you like or approve of. 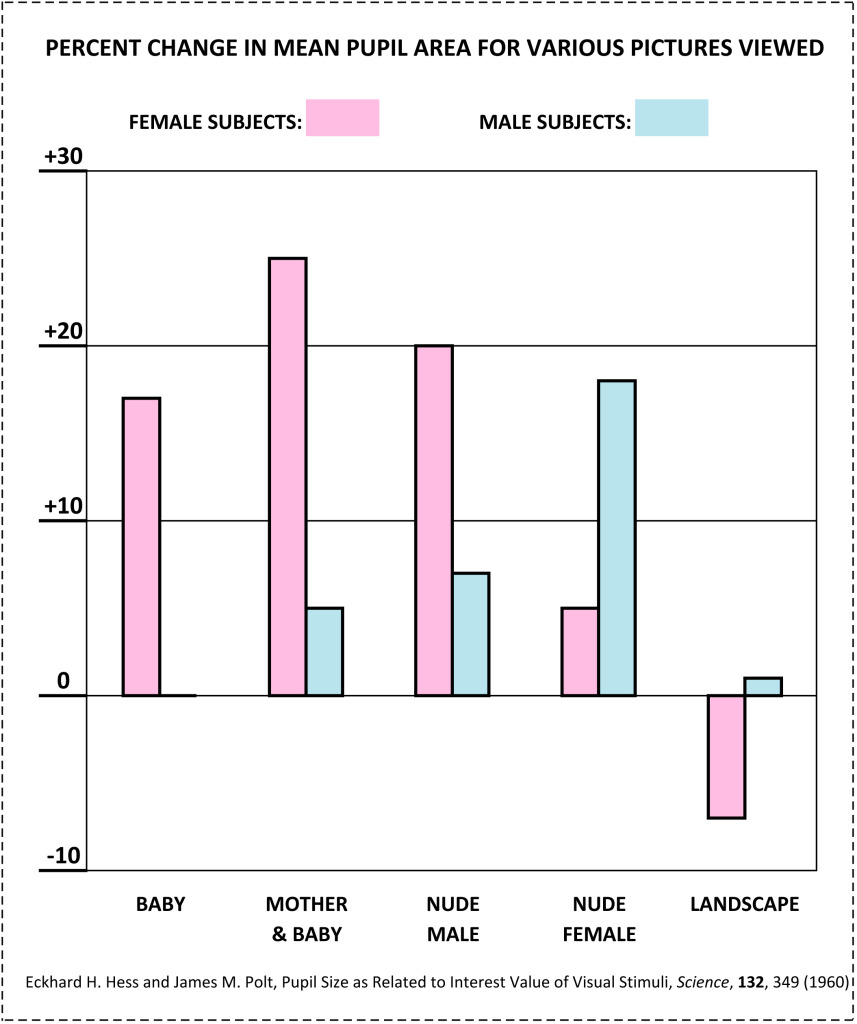 Despite the small number of subjects, the results were so significant, and so repeatable, that we can be pretty confident in the results. As the researchers quote, the eyes indeed are “windows of the soul.”

How Much Does Pupil Size Reveal?

Do these results mean that pupil dilation, at least, is a reliable measure of a person’s emotions? Many card players fear “tells” revealed by their eyes, not only by pupil size but by where they look and for how long. For those reasons, you may see professional gamblers wearing reflective sunglasses during tournaments to hide their eyes.

However, it’s not that straightforward:
– Pupils enlarge for many reasons. They depend upon internal factors such as affection, sexual arousal, preparation for “fight or flight” and response to drugs or illness. In addition, pupils react  to ambient light.
– A person who wanted to intentionally confuse pupillary signals could use techniques similar to those who train to fool polygraphs. These techniques include physical techniques (the old “thumbtack in the shoe” trick) as well as mental conditioning.

Nevertheless, within the overall context of how a person looks and acts, pupil dilation can provide valuable information that is difficult to fake.

Just as tells can reveal more than we wish, other kinds of nonverbal communication are available if we intend to send a message.

In law enforcement, body language works both to reveal and to control. For example, a suspect’s behavior may suggest innocence or guilt. At the same time, an investigator’s nonverbal cues may influence what the suspect does in a way that muddles the evidence that is being sought.

Trainers often encourage businesspeople to adopt an open or closed posture to match their immediate communication goal. Body signals may enhance rapport, or they may signal disapproval or intransigence in negotiations.

Some new recommended reading: In 2017 Zoey Miller wrote a long post about female body language on her life-experience website TheBabbleOut.com. Her article had the title How to tell if a girl likes you (8+1 signs she likes you – 2017 list!). Her article was directed to a man looking for a female relationship but as of 2018 I can no longer find it on her website. However, she has two other articles that touch on body language: How to tell if someone is lying? [7 Sure Signs] and What is Emotional Intelligence and How to Improve It?

We know that relationship formation is a complex process that depends on the present and past history of both parties. The subtle communication provided by body language plays a valuable role in testing the way forward for each participant. Miller’s articles touch on the gestures and actions that communicate “I’m interested.”

What more can we say, except that the smile is the biggest nonverbal tool of all. Perhaps a big part of the meaning of life is to smile and be smiled at!

A warm smile is the universal language of kindness. – William Arthur

Always remember to be happy, because you never know who’s falling in love with your smile. – Author Unknown

Wear a smile and have friends; wear a scowl and have wrinkles. – George Eliot

By the way, I’m wearing the smile you gave me. – Author Unknown

Do you watch for or use “tells” or other nonverbal communication?