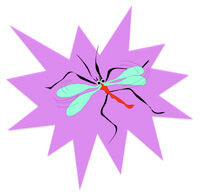 Science Fact: A laser bug zapper sounds like the perfect accessory for your new barbecue. Yes, that one, the one that’s as big as your neighbor’s car. Imagine a perfect outdoor summer party, suffering no more disturbance than the zit-zit-zit of your backyard laser bug zapper doing its job of protecting you.

I was once a laser researcher – so long ago that my biography references me as a “pioneer in laser technology.” [Those words cause me to imagine bespectacled laser researchers clattering across the prairies in Conestoga wagons, littering the landscape with discarded flashlamps and mirrors.]

In the early days we scientists ruefully described the laser as a “solution looking for a problem.” That is no longer the case, and laser applications abound. However, you will still not find a laser bug zapper at your local patio supply store.

The first laser bug zapper proposal I encountered was an article written by Jordin Kare, an inventor with more than 200 issued US patents. It appeared in 2010 in IEEE Spectrum, an engineering magazine, titled Backyard Star Wars: Build your own photonic fence to zap mosquitos midflight. Kare outlines a full military-style weapon system resident on your patio, and (perhaps tongue-in-cheek) says:

…for a few thousand dollars, a reasonably skilled engineer (such as a typical IEEE Spectrum reader) could probably assemble a [laser bug zapper] to shield backyard barbecue parties from voracious mosquitoes.

Incidentally, the extensive comments appended to the article are nearly as interesting as the article itself.

Did any over-eager young engineer take the bait and actually build a laser bug zapper after reading this article? Not that I heard of. However, now Intellectual Ventures, which holds rights to many patents, has licensed Lighting Science, a Florida-based company, to build and market a laser bug zapper.

The photo of the laboratory prototype laser bug zapper is a tangle of lenses, mirrors and copper tubing bolted to an optical table, occupying a space of about a cubic foot. It does not look ready to live in the great outdoors but, hey, you gotta start somewhere.

Lighting Science is not yet building a laser bug zapper that will strap onto your backyard barbecue, because biting bugs are not a deadly problem where you my reader most likely live. But there are large areas of the world where insects are not a nuisance but a mortal threat. For example, three blood-sucking insects that carry deadly disease are mosquitos, black flies and sandflies. These insects vector malaria, West Nile virus, elephantiasis, dengue fever, rabies and other illnesses that you don’t want.

Since insects reproduce more rapidly than we can kill them, their supply is effectively infinite. But we can hope to exclude them from a specific volume of space. Lighting Science’s initial targets, in increasing order of difficulty, are hospital clinics in Africa, military operations in sandy deserts, and rural villages.

The Problem of Selectivity

You may already know that only female mosquitos bite. The general pattern is that all mosquitos feed on plant nectars but females of most (but not all) species also need animal blood. The blood provides protein and iron that they need to make eggs. Since mosquitos inject saliva with anticoagulants and other chemicals into their prey, they unfortunately provide a mechanism for disease organisms to complete their life cycle, partly within the mosquito and partly within the organism that is bitten.

The malaria-spreading anopheles mosquito has evolved sexual dimorphism that helps males locate females by the high-pitched wingbeat of the female – 300 to 500 beats per second. In principle, a sensor could allow a laser bug zapper to identify just the female mosquitos and not waste its energy zapping the non-biting males.

This illustrates a broader issue: we don’t want the laser bug zapper to disable hummingbirds, honeybees or endangered Monarch butterflies; nor waste energy on dropping leaves or drops of mist; nor (probably) do we want it to zap your neighbor’s cat, or burn a hole in your neighbor’s shorts. So the laser bug zapper needs to have built-in “filters” that will shoot only the evil biting insects. Wingbeat speed, cruising speed, direction of flight (i.e., not straight downward) and critter size can all be used to manage the fatal blasts.

Science Speculation: Until the laser bug zapper goes on sale at your local hardware store, how can a dedicated summer barbecuer reduce distraction from mosquito bites?

DEET-containing bug repellents are effective. Most research indicates that they don’t pose a serious hazard to the environment or to human health, although some people fear that DEET can be harmful. It appears that mosquitos actively dislike the smell of DEET, and prefer to avoid it. There are also a half-dozen plants that are said to discourage biting insects: lemon balm, citronella, catnip, marigolds, lavender and peppermint.

You can also try to reduce your intrinsic attractiveness to biting insects. We know that they home in on the carbon dioxide we exhale. However, we also know that insects seem attracted to some people more than others. Twenty percent of people are “especially delicious” to mosquitos, whereas some people are not bothered by insect bites at all.

Wikipedia and Smithsonian Magazine offer lists of mosquito feeding preferences: people with type O blood, heavy breathers, those with a lot of skin bacteria, people with a lot of body heat, those who drink beer, those wearing strong colored clothing (black, dark blue and red) and the pregnant. Biting insects are attracted to elements of our sweat, including the chemical octenol. Mosquitos favor some ingredients of perfumes, such as nonanal (nonaldehyde) and that sweat chemical, octenol. We also know that mosquitos tend to feed starting at dusk.

With these clues, until you have a laser bug zapper in place, we can suggest practical ways to enhance your warm-weather outdoor enjoyment:
– Stock your garden with those plants that discourage the flying biters.
– Schedule your barbecue in the sunshiny part of the day.
– Don’t wear cologne, perfume, or scent-containing versions of skin products such as deodorants, moisturizers and sunscreens.
– Wear neutral colored clothing.
– Take a shower before you head to that barbecue, to minimize residual bacteria and sweat on your skin, especially on wrists and ankles.

There are also more extreme strategies:
– Move to northern Canada, Scandinavia or Greenland, where winter climate extremes make mosquitos a rare occurrence even in warm weather.
– Hold your outdoor barbecue before the spring thaw, perhaps during the ski season, with guests fashionably attired in down parkas and snow boots. When temperatures remain below 50 degrees Fahrenheit, mosquitos are still in their winter hibernation.

Perhaps some of these tools will tide you over until some future day when the laser bug zapper allows you a completely relaxed outdoor experience!

Will you be an early adopter when the consumer-model laser bug zapper goes on sale?