Alzheimer prevention has been the goal of many researchers, but progress has been frustratingly slow. Two new studies report Alzheimer risk reduced by 35% to 82%, truly astounding results on the road to a cure for this disease.

Spoiler alert: Blueberries are a healthy food that may help prevent Alzheimers disease! Additional material on blueberries added January 2017, near the bottom of this blog.

The first study used a new drug to prevent the deterioration of Alzheimer patients who already had the disease. And the second study looked at diets that seem to prevent the onset of Alzheimers, with a notable emphasis on blueberries.

The use of drugs to arrest the progress of Alzheimer disease got a big boost March 20 at an Alzheimer/Parkinson disease conference in Nice, France. Dr. Jeffrey Sevigny and four other researchers from Biogen Idec, a biotech company based in Cambridge, Massachusetts, reported new results. They had used aducanumab, a drug previously known as BIIB037, to treat Alzheimer patients. (BIIB is the company’s ticker symbol on NASDAQ.)

The researchers studied 166 volunteers with mild Alzheimer disease, 50 to 90 years old. Every four weeks for a year, they gave each patient an intravenous injection. The patients were divided into five test groups. Each group was randomly assigned to receive doses of 1, 3, 6, or 10 mg/kg of the drug, or a placebo. Every six months, the researchers tested for quantity of amyloid plaque in six regions of the brain. Also, they conducted standardized tests to measure dementia.

Patients receiving the placebo and the lowest dose of aducanumab showed no significant reduction in amyloid plaque. In addition, their brain function declined as their disease progressed.

However, all the higher doses led to decreases in plaque and reductions in dementia symptoms. The higher the dose, the greater the improvements. The overall effectiveness in combatting Alzheimers was as high as 70% or 82% depending on your news source.

AlzForum reported that an audience of 2,500 was rapt with attention at the presentation. The speaker reported that “after one year, the 10 mg dose appears to have pulled most amyloid from the brain.” Furthermore, this high dose appeared to arrest further mental deterioration.

Some patients suffered a side effect of localized swelling in the brain, especially at the highest drug dose. There is a genetic variant called “ApoE epsilon 4” that makes some people more vulnerable to Alzheimer disease. And test subjects with this gene were especially likely to suffer this side effect at high dose.

The researchers conservatively described their study as a Phase Ib clinical study, which confirms that a drug is safe. However, their work also combines elements of a Phase 2 study, which tests whether the drug is effective.

The results are so significant that the company plans to immediately begin recruiting patients for a Phase III study. This will likely involve more than a thousand patients and their personal physicians, and will occur in parallel as the company files for regulatory approval. The progress is so convincing that Biogen’s stock has risen substantially since early December, when this work began to be reported.

Diet becomes particularly significant for Alzheimer prevention when we consider the types of Alzheimer disease:

Thus researchers have come to regard diet as potentially the key tool in Alzheimer prevention for the most common type of Alzheimer disease.

The new anti-Alzheimer diet results come from a study at Rush University Medical Center in Chicago. The lead author is Prof. Martha Clare Morris. Co-authors come from Rush University plus Prof. Frank Sacks of the Harvard School of Public Health.

The researchers studied 923 volunteers aged 58 to 98 years and followed their progress for an average of 4.5 years. The patients were asked to regularly report on the foods they ate or avoided, and their mental functioning was measured.

The study was designed to test the effectiveness of three different diets that have been advocated to promote neurological and cardiovascular health:

The DASH Diet (Dietary Approaches to Stop Hypertension) is a product of the National Institutes of Health and USDA for heart health and general well-being. It emphasizes fruits, vegetables, whole grains and low-fat dairy foods. It includes meat, fish, poultry, nuts and beans. And it limits sugar-sweetened foods and beverages, red meat and added fats.

The MIND Diet (Mediterranean-DASH Intervention for Neurodegenerative Delay) was developed by Prof Morris and her colleagues to slow the onset of dementia. It combines elements of the DASH and Mediterranean diets, plus berries, especially blueberries. Blueberries have been shown to have many medical benefits, including brain health. The MIND diet emphasizes whole grains, a salad, a vegetable and a glass of wine every day. It advocates snacking on nuts and berries. Also, it encourages the eating of beans, poultry and fish every week. Dieters must limit butter, cheese and fast food.

Sizing Up the Data

The diets followed by the volunteers received scores according to how closely they matched the DASH, Mediterranean and MIND diets. During the study, among the approximately 1000 volunteers, 144 cases of Alzheimers were diagnosed.

It turned out that among those whose diets closely matched one of the three diets, the incidence of Alzheimers was greatly reduced – by 39% for DASH, by 54% by Mediterranean and by 53% for MIND.

Few people have the discipline to adhere to any of these strict diet plans. Those who try them seem to feel that they take the fun out of eating. Therefore, it’s important to know what happens when people only follow a dietary plan “part way.”

In the case of the DASH and Mediterranean diets, those who adhered to the diets only “moderately” experienced no significant Alzheimer prevention. However, those who moderately matched the MIND diet had a 35% lower risk of contracting Alzheimers.

This is a marvelous result. It suggests that a less-than-superhuman obsession with what you eat can still yield significant benefits in maintaining good health.

Does that inspire you to try the MIND diet yourself? You will find explanations at various levels of detail from Rush University, Alzheimers News Today and Yahoo.

One of the fascinating things about research results is that they’re unpredictable. Most progress in science arises as the cumulative effect of many small advances made in thousands of studies. Sometimes, an insightful idea will allow a gigantic leap forward. And once in a while an experiment will produce results so dramatic that they challenge our fundamental ideas.

That is the case with the two Alzheimer prevention studies earlier in this blog. The researchers themselves probably hoped for, and perhaps even expected, great results. And those results are startling to the rest of the scientific community. The effectiveness of Alzheimer prevention shown will strongly influence future work.

The Alzheimer prevention by the drug aducanumab illustrates how the design of the research project may pre-determine its success or failure.

Aducanumab is not the first candidate drug for Alzheimer prevention, operating by slowing the buildup of amyloid plaques in the brain. As some news reports pointed out, similar drugs such as solanezumab, bapineuzumab, gantenerumab and crenezumab performed much more poorly in previous trials. There’s a key difference in Biogen’s study of aducanumab. Biogen used PET brain scans to confirm that patients actually had amyloid plaques before enrolling them in the study.

This extra step required additional effort and expense, but really paid off. This pre-testing excluded 20% to 30% of patients who had dementia symptoms but not specifically Alzheimers. Therefore, Biogen was able to see a much larger effect from the drug, as well as improve the statistical significance of their results.

This amazing demonstration of the value of careful experimental design and the merit of investing “up front” in the study will probably inspire a re-examination of other Alzheimer prevention drugs. Thus Biogen has not only shown the value of its own drug, it has demonstrated a better pathway for testing competing drugs as well. The increased competition should lead to even more effective Alzheimer prevention therapies.

The MIND dietary study shows two significant results. First, a complete diet regimen may have a dramatic effect on Alzheimer prevention. And more surprisingly, that even small tweaks in the diet can bring great benefits.

As usual, we must caution that the researchers have shown correlation, but not proved causation (à la previous blogs on Slow Food and Raisin Diet). What Alzheimer patients report eating allows us to predict the future progress of their disease. That doesn’t yet prove that people who purposely change their diets will achieve Alzheimer prevention. That would be the next step in figuring out an Alzheimer therapy.

The significant Alzheimer protection associated with close adherence to any of the diets is impressive in itself. For example, the roughly 50% reduction in risk exceeds the results obtained using dietary changes for prevention of diabetes and cardiovascular disease. However, also significant is the substantial (35%) risk reduction that relates to simply a moderate adherence to one of the three diets studied.

Practical Advice For the Reader

Until we know more, I suggest that anyone interested in Alzheimer prevention consider this advice:
– Favor the “healthy food” eating habits that we hear everywhere around us. Emphasize vegies, whole grains, legumes (beans, lentils, peas), fish, poultry, olive oil, nuts and wine.
– Give your diet an extra boost by snacking on berries, especially blueberries. At the same time, try to avoid pastries & candy, fried or fast food, and cheese. Preferably, make those berries organic, because berries are a frequent headliner on the Dirty Dozen pesticide list (see the Organic Food discussion in an earlier blog).
– Exercise, get enough sleep and be happy! 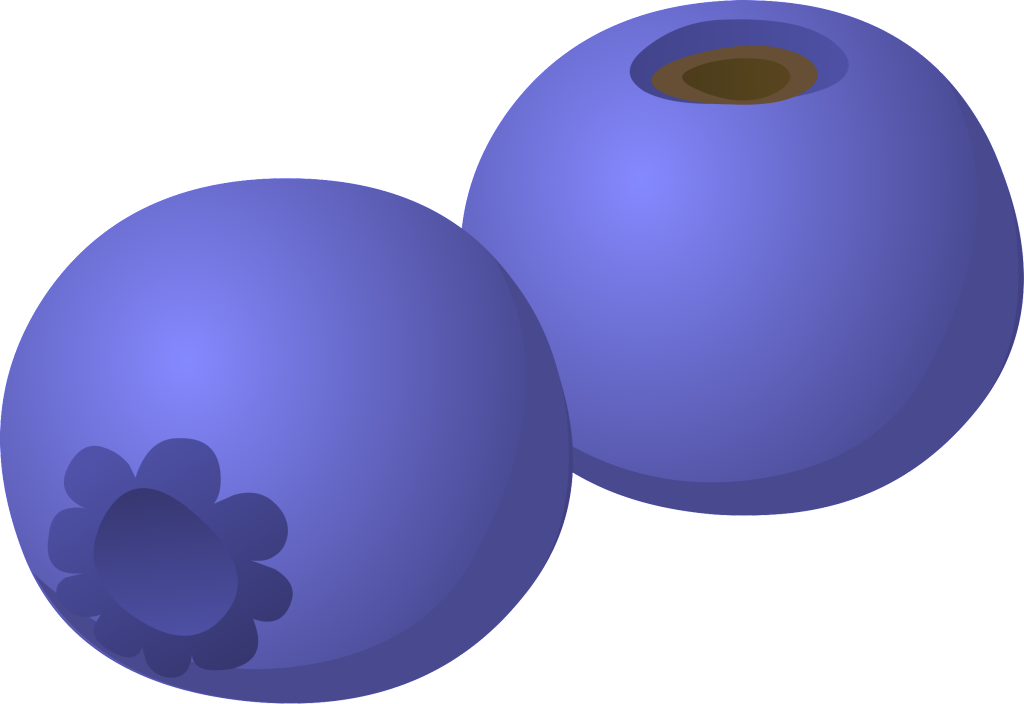 Diet appears to be an important factor in Alzheimer prevention. Are you ready to stock your fridge with blueberries and nuts, and cut down those forbidden treats?

Does that gigantic drawing of blueberries make your tongue tingle? Read on!

I just received an e-mail from Jacky Miller at jenreviews.com pointing me to her blog post on the ten health benefits of blueberries, plus four recipes using blueberries. You may enjoy reading it HERE.

Jacky’s blueberry pie recipe in turn inspired me to share with you Nola’s great recipe for blueberry pizza. (Yes, you heard right, and no, it’s not a main course, it’s a dessert). Here it is for your enjoyment (click the image to enlarge it): 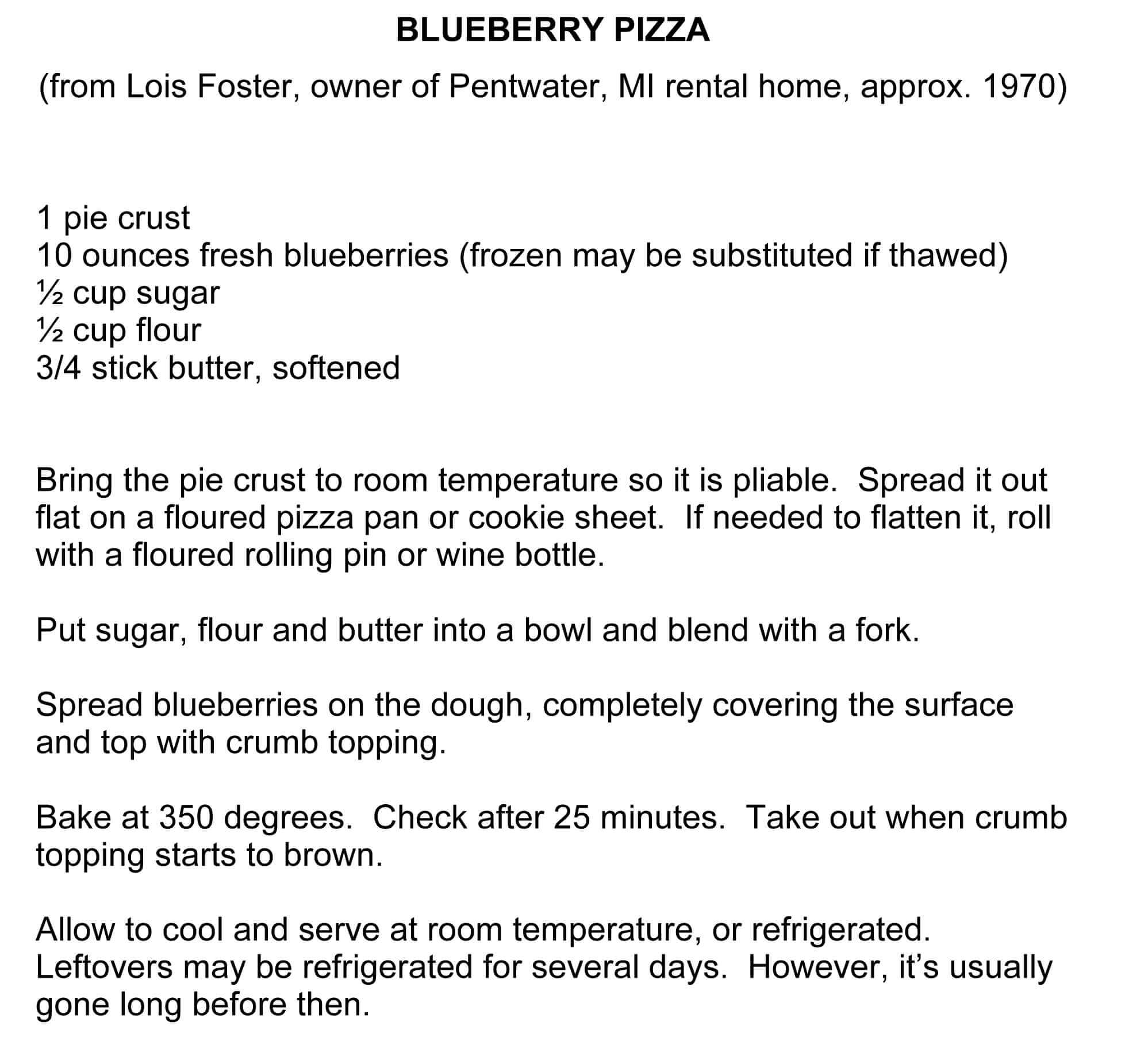