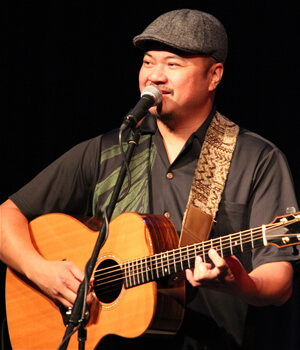 Slack key guitar is the secret music of Hawaii. It grew up on the ranches of the Big Island. Then it spread to the other Hawaiian islands as a private tradition for family and close friends. Hawaiians did not share it with visiting tourists and for a hundred years it was largely unknown outside of Hawaii.

In the first half of the twentieth century, slack key guitar played second fiddle to the ukulele and the electrified steel guitar1. The public strongly identified both of these instruments with Hawaii as a result of recordings and films. However, beginning in the 1970s slack key guitar emerged from hiding and today people recognize it as an authentic and traditional Hawaiian musical art form.

The roots of slack key guitar came from British Captain George Vancouver, who gave several Mexican cattle to Hawaiian King Kamehameha I in 1793 and again in 1794. To help the cattle thrive, the king enacted a kapu [taboo] that protected them. In a few dozen years the cattle overran the Big Island of Hawaii.

Mexican cowboys [vaqueros] arrived to teach the Hawaiians how to ranch cattle. The Hawaiians called these Spanish-speaking cattlemen paniolo, a Hawaiian adaptation of the word español [Spaniard]. Historians believe that the Mexicans brought with them Spanish-style guitars, taught the Hawaiians the basics of how to play them, and gave guitars to their Hawaiian friends. When the Mexicans returned home, the Hawaiians developed their own style of guitar music.

Slack Key Guitar: Not for Slackers!

But that would be a mistake. Watch this video for a moment and marvel at the skill and musicality with which Ledward Kaapana plays the slack key guitar:

Those nimble fingers (and wrist, and arm!) are playing “Mauna Loa Slack Key,” and the video appears on YouTube thanks to “HI*Sessions.”

If you remember your third grade music class or piano lessons, a G major chord consists of the notes G, B and D. That fits three of the guitar strings, but what about the A and two E’s that are left over? The six strings of the standard guitar, when you play them together, don’t form any familiar chord. In fact, they don’t sound very good together. You have to put your fingers on some frets and change the pitch of at least a couple of the strings to get a nice-sounding chord.

In practical terms, you can only re-tune a guitar in so many ways. If you tighten the strings more than the standard tension they are more likely to break. But if you loosen them too much, the string doesn’t produce a pleasant tone. In practice, a slack key guitar player will slacken three to six of the strings by anywhere from one to four semitones. However, no rule is absolute: three commonly used slack key guitar tunings listed by Wikipedia (Atta’s C, Mauna Loa and F Wahine) ignore the risk of breakage and involve tightening strings by one or two semitones.

The Physics of Non-Standard Tuning

Why would Hawaiians adopt a non-standard tuning?

In the early years, not many Hawaiians knew the fingerings for chords, so they adjusted the instruments to produce a nice-sounding open chord. OK, so the first tuning adjustments might have been due to inexperience or laziness. However, individual Hawaiian players kept adding more and more different slack key guitar tunings.

There are more than fifty different tunings in use today. In some instances the unfretted sound of all strings doesn’t sound like a chord at all. Musicians would say that the sound might be a major chord (G, D or C), a major seventh chord (G, D or F), a major sixth chord, or in some cases a chord that has no recognized name.

Thus, many of the slack key guitar tunings are not useful as open chords. However, there are other musical reasons for various tuning schemes, and those have nothing to do with laziness. With the help of videos and historical articles, plus a bit of physics, this is what I came up with:

An instrument in an orchestra may have play an arbitrary melody in any possible key. However, a slack key guitar is not generally in an orchestra. Slack key guitar exists to play solos or to accompany the voice, with at most one or two other instruments. As a result:
– The player may choose the tuning to enhance the style of music being played, or in some cases, to give a unique tone to one particular song.
– Since the guitar doesn’t need to play in every musical key, it can use just intonation (“just tuning”) as I described in an earlier blog. In just tuning, the overtones of the different strings perfectly match to produce a rich, full sound that resounds through much indigenous or folk-based music.

From the very beginning, the tradition of chants inspired Hawaiian guitar players, as in my post about Hula. A style of playing developed in which the thumb plays a steady accompaniment (an ostinato) on the lowest three strings of the guitar while the other fingers play melody and ornamentation on the upper strings. This bass line is like the drum rhythm accompanying a Hawaiian chant. Slack key guitarist Jeff Peterson’s video calls it a heartbeat.

Non-standard tuning can also facilitate “chiming,” one of the special effects that slack key guitar players use.

The player produces chiming by plucking two or three strings high on the neck, close to the fretted hand. The Just Tuning blog explains that this type of pluck produces a sound that emphasizes the higher harmonics of the string. I believe that some of the slack key guitar tunings are popular because they enhance the “chiming” sound. They require a suitable fretting as well as plucking at just the right position along the string.

The tuning also creates a surrounding sonic aura for the entire piece of music. When you pluck one string of a guitar, you stimulate tones from all the other strings at the same time. This occurs for two reasons: (1) The impulse of the pluck transmits through the wood to the other strings, lightly exciting them. And (2) the harmonic sounds of the string you plucked resonate with harmonics of other strings, thereby exciting those strings, which in turn reinforce the sound of the plucked string. The player’s choice of a tuning when playing a particular piece of music can enhance these effects.

Where to Hear Slack Key Guitar

You may get lucky and encounter slack key guitar as background entertainment at a restaurant or hotel. However, the best players want – and can get – an audience for a full show. At such a show you are likely to hear a variety of pieces: pure instrumentals; songs sung in Hawaiian (and sometimes in English); and perhaps guitar-ukulele duets. Here’s where to find those performances:

The Big Island, whose ranches were the birthplace of slack key guitar music, features performances at resorts and at cafes. Check the KonaWeb list of events and the 101 Things To Do2 article.

If you take a Maui vacation, there’s a slack key guitar show every Wednesday (and often, Thursday) evening at the Napili Kai Beach Resort in West Maui. The organizer is slack key guitarist George Kahumoku Jr. It’s titled Masters of Hawaiian Music and features many well known players of slack key guitar. The show won a 2015 Certificate of Excellence from TripAdvisor and is an attraction that receives high ratings. Nancy Kahumoku’s YouTube page features many videos recorded at this show. Show tickets are $38 in advance for two hours of music, shared with an audience of typically 100 to 150.

Kauai has its own slack key guitar show, billed as the longest running concert of its kind. It’s the McMaster Guitar and Ukulele Concerts, held on the north shore of Kauai on Friday and Sunday afternoons. The show’s sponsors, Doug and Sandy McMaster, also have a YouTube page where they show many videos. Performance tickets are $20 for two hours of music, in an audience of 70 to 100 patrons.

For the aficionado, or simply the fan of slack key guitar music who happens to be visiting the right place at the right time, there are many slack key guitar festivals. A Google search on “Slack Key Guitar Festival” turns up several-day fests on every Hawaiian island plus such outposts as Southern California, Seattle, and perhaps even your hometown. One of the “masters” of this art form, Keola Beamer, summarized the major festivals as follows in a post that formerly (as of August 2015) appeared on his website:

Currently, there are several major slack key festivals. The Gabby Pahinui/Atta isaacs Slack Key Festival is held annually in or near Honolulu on the Island of O’ahu, every third Sunday in August, and the annual Big Island Slack Key Guitar Festival is held on the next to last Sunday in July at the Hilo Civic Auditorium on the island of Hawai’i. Other festivals also take place on Maui and Kauai, on the Mainland, and occasionally internationally.

I’ll end this blog with another treat for you: Jeff Peterson performing his instrumental piece “Kipahulu” at the Slack Key Show. The video comes courtesy of Nancy Kahumoku.

Slack Key Guitar is a cultural tradition that also makes great entertainment. Try to sample it when you visit the Hawaiian islands.

Jeff Peterson’s video that shows how slack key guitar music grew out of and helps sustain Hawaiian traditions. You might also enjoy Jeff’s instrumental “Haleakala,” performed on the slopes of Mount Haleakala where he grew up.

Wikipedia’s article on slack key guitar describes popular tunings and gives the names of many players, many of whom also have separate Wikipedia biographies.