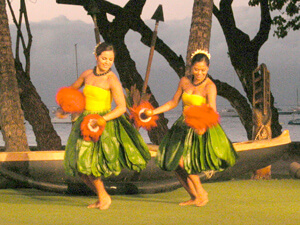 Hula is a paradox: it’s the Hawaiian art form that people know best around the world, yet also least understand. This blog discusses its history, its heart, and where to find and experience it.

If you take a Maui vacation, you may encounter hula even before claiming your suitcase. If you arrive at Kahului airport before 9:00 p.m., as you approach baggage claim you may hear strumming guitar and ukulele. A man begins to sing, in lilting syllables.

As you round the corner, you see two women moving gracefully in the dance. Long dark hair drapes their shoulders and backs, and they wear flowered sheath dresses almost reaching the floor. Leis adorn their necks and they are bare-footed. Hips sway like palm trees in the wind, hands and arms stroke the air. All the while they are smiling at you, the lucky visitor just arrived. 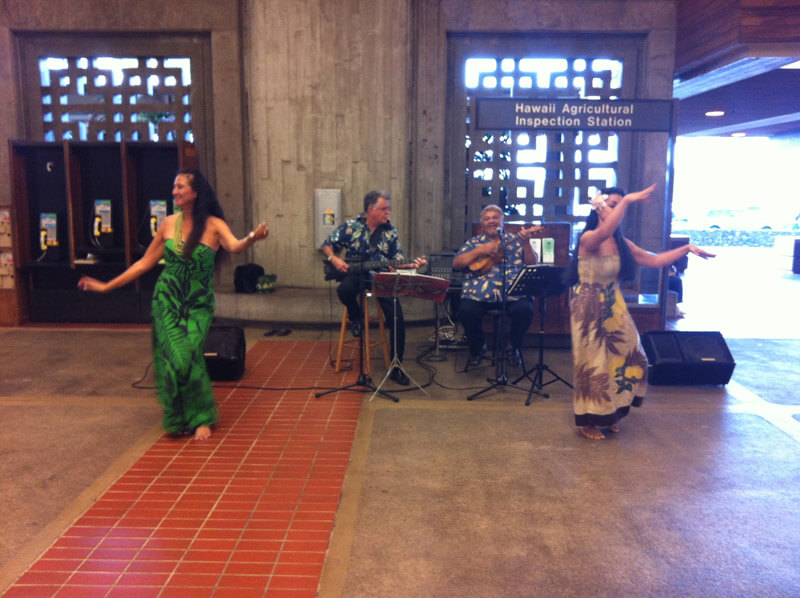 What are we to make of this greeting? If the flight hasn’t exhausted us, we will find the dance entertaining and welcoming. It’s also great public relations, merely the first of many gifts the island gives to its visitors. But it’s not just a performance. This exotic act also gives us a peek into a cultural heritage that runs surprisingly deep in the Hawaiian people.

The Science of the Dance

Since this is a science blog, you may wonder: is there science here? Yes, indeed:
– Nutritionists have determined that hula dancing consumes 238 calories per hour1.
– Cardiologists have studied this practice as a basis for a healthy-heart program, and have also found evidence for hula’s support of mental and emotional health.
– Cultural anthropologists use the chants of hula as a window into the history of Hawaii before the introduction of written language.

In this article, we’ll pull back the curtain for a brief glimpse at the complexities of hula. Then we’ll talk about how a non-Hawaiian may experience some of its deep magic. To reduce confusion for the non-Hawaiian reader, Hawaiian terms will be used sparingly, with Hawaiian / English translations given in brackets: [ ]. 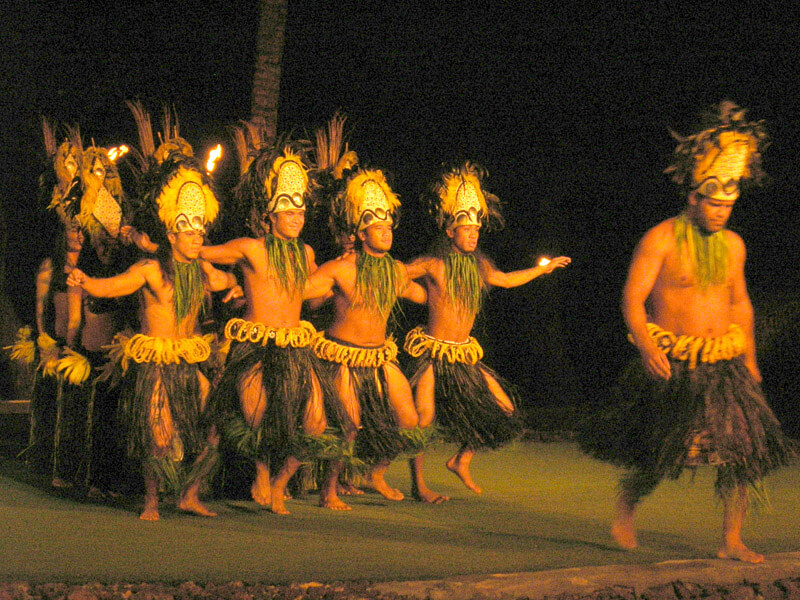 The Polynesian people were skilled navigators who settled in many Pacific islands. Historians believe that they reached the Hawaiian islands around the year 500. We know that Polynesians bought and sold goods over distances of thousands of miles. However, contact was still so infrequent that the Hawaiian islands evolved distinctive traditions and customs, among them the hula.

The people settling in Hawaii organized into tribes based on family and personal ties. Although tribes struggled for dominance, they also formed alliances, engaged in trade, and intermarried. Social traditions, including hula, arose from their common heritage and history.

Since Hawaii had no written language, its history was passed down by an oral tradition of chants or poems [mele]. The chants told stories of creation and of the gods, and the genealogies of Hawaii’s leaders. The rhythm of the poems was reinforced by accompaniment using a variety of percussion instruments. Among these were gourd drums [ipu], water-worn lava rocks used as castanets [’ili’ili], feathered gourd rattles [’uli’uli] and rhythm sticks [kala’au].

In traditional hula [hula kahiko] men chanted the poems, and men also played the instrumental accompaniment. Women dancers gave a visual counterpoint to the chants. Their costumes and body motions directly reinforced the words of the stories.

Rhythmic motions of the upper body could represent rippling waves, the motion of trees in the wind, or the emotions of the poem. Lower body movement echoed the cycles of the earth and the heavens, and volcanic power ready to emerge from the earth at any moment.

When Captain James Cook arrived in 1778 he found native chieftains battling each other fiercely to gain more territory. Trade with Europe soon brought cannons, muskets and ships to the inter-island conflicts. With the help of this technology, in 1810 a single leader, Kamehameha I, gained dominion over all of Hawaii.

The Hawaiian islands were well positioned as a way station for trans-Pacific voyages and as an operations base for whalers. Thus there were many incentives for Europeans to visit, settle on and exert control over the indigenous people and their customs.

Beginning in 1820, missionaries made it their business to convert the Hawaiian people to their version of Christianity. Traditional hula was danced by women wearing a wrapped skirt [pa’u] with bare upper bodies. Male dancers wore a loincloth [malo]. Churchmen just arrived from New England found the dances pagan and the attire sinful. As soon as they converted the Hawaiian monarchs to their religion, they persuaded them to outlaw this dancing as well as other traditions.

Fortunately, hula was saved from extinction by Hawaiian King David Kalākaua, who reigned from 1874 to 1891. Kalākaua, often called the Merrie Monarch, was an enthusiastic patron of Hawaii’s cultural history. He spent much time traveling between the islands and visiting the people. His visits were the occasion for festivals featuring featuring chant and traditional dance. To appease Victorian churchmen, costumes were adopted that covered the bodies of the dancers. 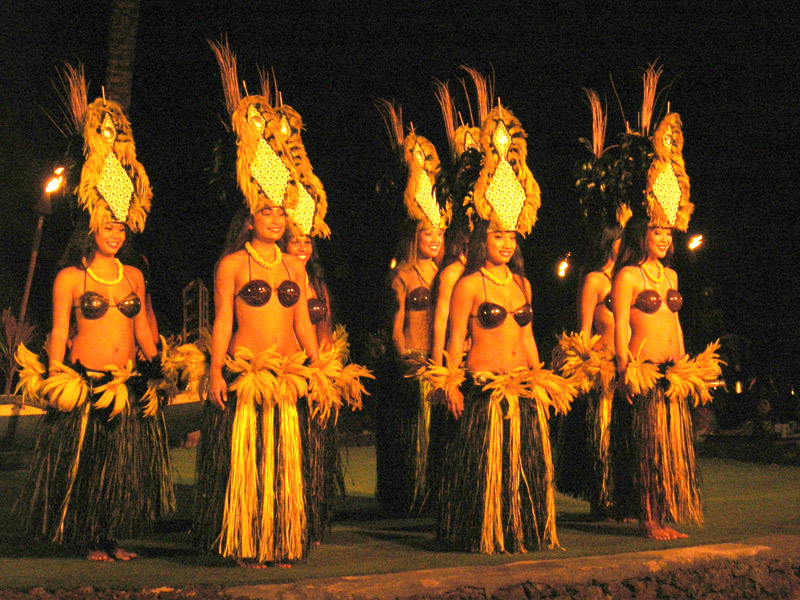 The grass skirt became standard Hawaii movie attire, as in the Elvis Presley film Blue Hawaii (1961). Along the way, some (presumably) male marketer added an uncomfortable and impractical accessory – the coconut bra. The coconut bra became a staple of a famous long-running tourist show, the Kodak Hula Show. It has also become standard in many shows for tourists. Dancers today who seriously study the art have discarded these kitschy props and returned to more authentic costumes.

The twentieth century brought an important change to the dance. The addition of music was so popular that it has created a new and parallel tradition. The traditional chant style of hula [hula kahiko] has been joined by “modern hula” [hula ’auana]. The modern form adds musical accompaniment by guitar, ukulele and bass, and converts chants into songs, sometimes sung in harmony.

Although practitioners of traditional dance may look askance, modern hula is so popular with tourists that it is probably the only type you will see as a visitor to Hawaii. Nevertheless, both types are a part of Hawaii today. The annual Merrie Monarch festival on the Big Island of Hawaii gives equal stage emphasis to both hula kahiko and hula ’auana.

Hula’s wide popularity sustains it economically for its entertainment value. However, its practitioners see it as a holistic lifestyle. There’s a fascinating research article that pulls together the views of six “culturally recognized hula educators and experts,” who are known as kumu hula.

The goal of the researchers was to see whether this dance form could be successfully used to motivate Hawaiians to improve their cardiovascular health. The teachers described dance practice as supporting overall health through the integration of these elements:
– Physical health: through vigorous dancing, especially with long periods of dancing or the addition of weights to feet and hands.
– Mental health: from ritual and routine that structures both rehearsal and performance, plus memory improvements from learning complicated dance sequences.
– Emotional health: an “entrance chant” to begin the dance session without bringing the emotional baggage of everyday life. In addition, there is benefit from the mutual support of other group members.
– Spiritual health: the integration of physical, mental and emotional health. This is the idea that supports the concept of dancing to akua (God, or the gods). 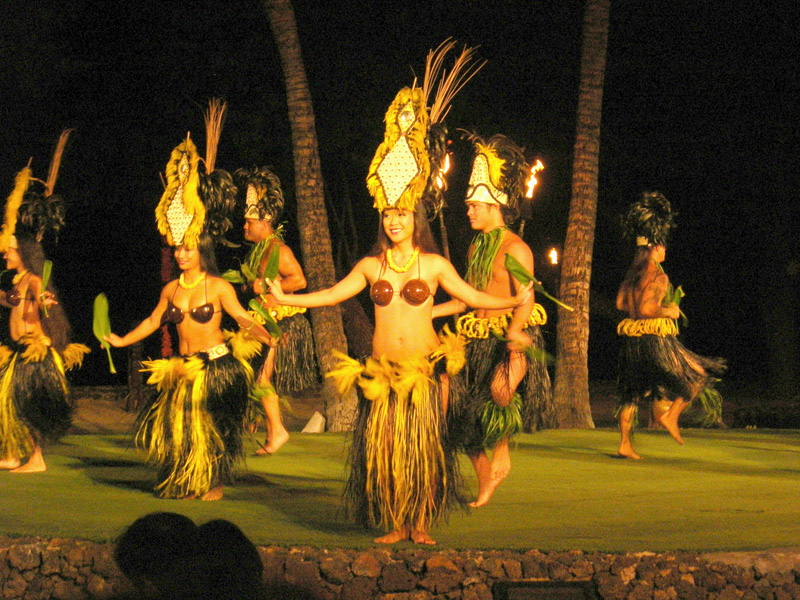 Hula for the Visitor to Hawaii

If you were not fortunate enough to catch a dance performance upon your arrival, there are many other ways you can enjoy this deeply meaningful dance tradition:

The Lahaina Cannery Mall in Lahaina, Maui has free performances several times a week. The keiki (childrens) shows are particularly charming. You may see some unauthentic grass costumes but hey, you get what you pay for. Other shopping centers on Maui also offer free shows, generally not on as frequent a schedule.

The Hawaiian tradition of a luau (feast) has become tourist entertainment. A Maui vacation would be incomplete without enjoying the Old Lahaina Luau, which has its own performance space. Also, major hotels mount their own shows, complete with hula, Hawaiian foods and of course tropical drinks. 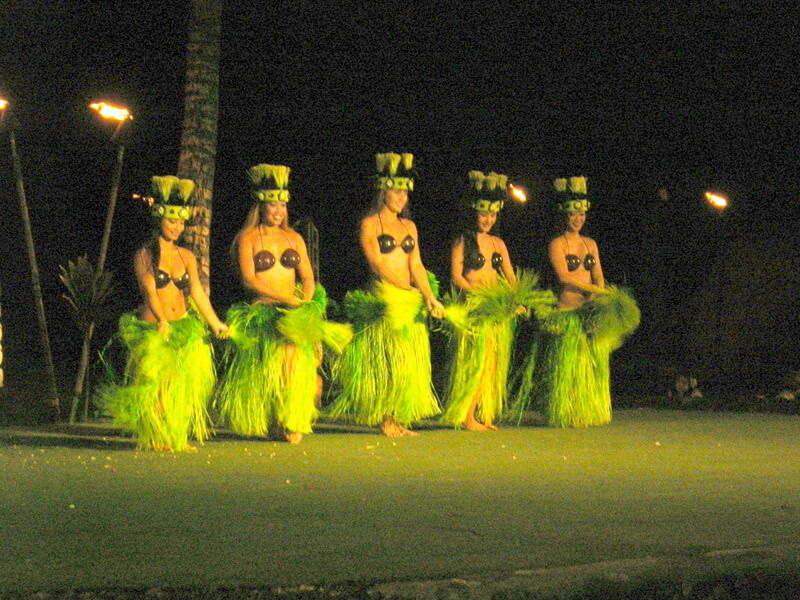 When your vacation is past, you can continue to enjoy hula, either as a spectator sport or as a personal activity:

There are some wonderful videos of prize-winning dance performances, both in the traditional and the modern styles. For example, the first place Wahine ‘Auana winners at the 2009 Merrie Monarch festival were students from the dance school Hula Halau ‘O Kamuela. Their performance begins at minute 2:00 of this YouTube video as they perform to the song Panini Pua Kea (White Flowered Cactus). The dance and its liquid words are made even more beautiful if you follow along with the English translation:

[English]
Where has Leialoha gone?
My companion amid the beautiful flowers

Here am I, “Sweep-all-to-myself”
Your sweetheart in the shadow of fair flowers

I also recommend this youtube recording (audio only) of “Iz” (Israel Kamakawiwoʻole) singing the same song in his beautiful tenor voice.

DVDs use the goal of physical health as the “hook” to introduce you to the traditional dance tradition. Two examples are Hula Workout for Beginners and Island Girl Dance Fitness.

If you fall in love with this art form you may want to consider classes at a dance school [halau hula]. The website mele.com lists hula schools in many states and countries. To enjoy the fullest experience, try to select a teacher whose students rank well in formal competitions. In those tourneys participants not only have to dance with skill. They must also explain how their choreography integrates with the images painted by the accompanying song or chant.

However you choose to experience it, you are likely to agree with the words of King David Kalākaua:

Hula is the language of the heart, therefore the heartbeat of the Hawaiian People.

Whether or not you make hula a part of your life, when you visit Hawaii please don’t miss the chance to see and hear the beauty of this traditional yet modern art form.