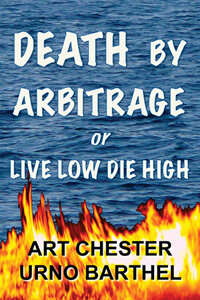 Big news – actually, triple news – about Death By Arbitrage or Live Low Die High, the third novel in the Evan Olsson mystery series. This novel, authored by Art Chester and Urno Barthel, resolves some though not all of the plotlines established in Death By Probability and Death By Tech, the first two Evan Olsson mysteries.

I want to share with you Death By Arbitrage‘s three pieces of good news:

The publication of Death By Arbitrage has stretched over several weeks as the paperback, PDF, Kindle and Nook editions were published and posted on the Amazon, Barnes and Noble and Outskirts Press websites, then enhanced with “look inside” features. All editions are now available for your reading interest.

The completion of the third book feels like a milestone, and it seems appropriate to mark it with a book signing, to officially celebrate its release. And the most appropriate place for a book signing is of course Malibu, California, where most of the events in all three books occur.

Bank of Books (formerly Malibu’s own bookstore but now only in Ventura) graciously scheduled a book signing for 2:00 pm on Saturday November 14, 2015. I hope that readers of my website who are near Malibu will stop by to say hello! The bookstore is in the Point Dume Village shopping center at Heathercliff and Pacific Coast Highway in West Malibu. The store is across from Chase Bank and Lily’s Cafe, and behind the coffee shop Cafecito Organico.

Kirkus Reviews is a bi-monthly literary magazine founded in 1933 that the Washington Post describes as “the book industry’s most ferocious trade publication.” Their website receives over a million hits per day, and one of the ways they support themselves is by reviewing (for a fee) independently published books like the Evan Olsson series.

Kirkus has written very positive reviews of all three books in the series: Death By Probability, Death By Tech and now Death By Arbitrage.

I was surprised to see that the Kirkus review of Death By Arbitrage bore a star, which Kirkus awards to “books of exceptional merit.” Kirkus also notified me that the book was one of the Indy books featured in the September 15 issue of their magazine Kirkus Reviews. Upon further research, I learned that although Kirkus awards the star to 10% of “conventionally published” books, only 2% of “independently published” books like mine receive a star. The good news for me is that, to Kirkus eyes at least, the quality of my writing is improving as I continue to practice it.

I hope you can attend the Death By Arbitrage signing in Malibu on November 14. I’d love you to buy one of their books of course, but even more I’d like the chance to say hello to a reader or potential reader!