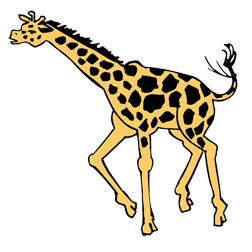 Last month a research article about giraffe sounds caught my attention, and you may have seen reports of it as well. It reveals something never before known about one of nature’s most beloved wild animals.

Science Fact. Two cognitive biologists from the University of Vienna teamed up with an employee of Tierpark Berlin, one of Berlin’s two zoos, and discovered something that no one has ever suspected – that giraffes make vocal sounds on purpose, and that giraffe sounds appear to be used as a means of communication.

A lion “roars”, a dog “barks”, an elephant “trumpets”, but what does a giraffe sound like?

I have seen many giraffes in zoos and up close in wild animal parks, and have even on occasion fed them snacks of grass under the supervision of a naturalist. During this time I could not remember any giraffe sounds other than a snort or snuffle: normal breathing sounds. I had no idea of the answer to the article’s question, and all I could think of was the video by the Ylvis brothers that asks “What Does the Fox Say?”

When we say that giraffe sounds are unknown, it does not mean that the animals are totally silent. There are anecdotal reports of occasional giraffe sounds that have been called “bleat”, “brrr”, “burst”, “cough”, “growl”, “grunt”, “low” “moan”, “moo”, “sneeze”, “snore” or “snort.” However, these noises occur only rarely. They are basically short bursts of air, without any apparent attempt to shape a recognizable sound and without a dominant sound frequency.

It had been suggested that the long airway in the giraffe’s neck might produce infrasonic sounds, that is, very deeply pitched sounds below the range of human hearing. Thus the reason no one has noted giraffe sounds might be that they are too low in frequency for our ears. (For example, elephants, another large animal, are known to produce very low-pitched rumbles.)

In case infrasonic giraffe sounds had previously escaped notice, the researchers made sure to capture a wide range of audio frequencies. Human hearing nominally ranges from 20 Hz to 20,000 Hz; the researchers recorded all sounds from 10 Hz to 40,000 Hz.

The research team found no low-frequency giraffe sounds, as had been proposed. Instead, they found that giraffes typically “hum,” and only at nighttime. The hum is pitched at a low frequency, but well within the range of human hearing.

Not only had these giraffe sounds never been reported in the scientific literature: giraffe keepers and zoo managers told the researchers that they had never heard giraffes hum.

You can hear a typical giraffe hum HERE. To me, it sounds like an airplane buzzing past again and again, or a distant race car circling a track.

The average fundamental frequency of these giraffe sounds was around 92 Hz. Typical giraffe sounds might be as short as half a second or as long as four seconds.

92 Hz is a tone close to F#2 on the piano, that is, the second F# below middle C. Differently stated, 92 Hz is below the range of a tenor’s voice, but well within the lower range of a bass-baritone. Thus a singer with a low voice could “sing along” with the giraffe sounds.

What is the purpose of the giraffe sounds, their nocturnal humming?

The researchers note that at each of these zoos, the herd of giraffes was not kept together at night. In Berlin, giraffes were kept in separate stalls, except that calves were kept with their mothers. In Copenhagen, a pregnant female was kept separate from the herd. And in Vienna, the giraffe bull was separated from the rest of the herd at night.

It is known that some animals engage in purposeful communication to strengthen the bonding of a group. Elephants, buffalo, hyenas and chimpanzees give calls to identify themselves at a distance, and to strengthen social bonding when meeting after a temporary separation.

Therefore, the researchers postulate that since some members of the group are housed separately from the others at night, the hums are a way of reassuring each other that all members of the herd are still nearby, even though they may not be within touching distance. In other words, “I’m here, Joe,” and perhaps “Everything seems OK over here.”

Science Speculation. You may not think giraffes humming is such big news, but consider this: giraffes are a distinctive animal that is very popular with the public. For these reasons, they have been intensively studied by scientists and zoo keepers for hundreds of years, and we know a great deal about them.

This research does not announce a new galaxy cluster discovered by the $2.5 billion Hubble Space Telescope. Nor does it reveal a new pentaquark particle just discovered by hundreds of researchers at CERN. Quite the contrary: giraffe sounds are a natural phenomenon that could have been discovered by anyone – at least, anyone who hangs around with giraffes. Giraffe sounds are almost in the same category as a new comet found by an amateur astronomer with a backyard telescope: wonderful new knowledge available to anyone who looks for it.

What can we conclude?
– Despite the significant advances in our knowledge of the natural world, we are far from knowing everything, even about creatures we think we know well; and
– Surprising new things can still be discovered by anyone!

Now that you know what the Giraffe says, are you inclined to listen closely to other animals, the next time you visit a zoo???

Image Credit: “Giraffe” from The Print Shop 2 Collection. Not for download or reuse.