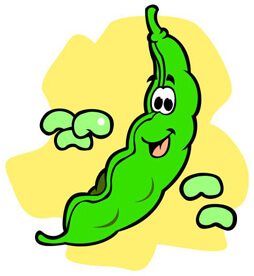 Fava stew is a flavorful way to enjoy the fava bean, a tasty but lesser-known inhabitant of the produce aisle. It’s a healthy food that deserves a spot in your recipe book.

More commonly known as broad beans outside the U.S., favas have been a staple of the human diet for at least 8,000 years and are a familiar food in almost every continent.

I used to visit Italy frequently, and I still serve as the volunteer Co-Director of an international laser school in Erice, Sicily. The school’s sessions consist of workshops that are usually held in the summer months. I spent many happy days in Italy, and one of my summer memories is of buying fresh fava beans from roadside produce stands. (This was years before Hannibal Lecter became synonymous with favas to movie-goers.)

The fava bean or broad bean is quite impressive when still in its pod. The pod of the cultivated bean is a rich green color and is almost as long as your forearm – it’s 6 to 10 inches long and an inch across. My Italian friends would take a couple of fava pods along with them in the car. While traveling they would pop out individual beans, which were light green in color and resembled very large lima beans. Each bean would be eaten whole as a chewy, crunchy snack. They are fresh-tasting, slightly sweet with a tart aftertaste.

The raw beans are satisfying and filling. A pod of 5 beans has only about 5 calories (kcal) of food energy. Favas provide the highest protein and fiber per calorie among common varieties of beans: 8 grams and 9 grams respectively per 88-calorie 100 gram (3.5 ounce) portion.

Some months ago I was re-stocking our dried fruit, French lentils and kidney beans. We purchase such items from Sun Organic Farm in San Marcos, California. (Despite their name, they are packagers and distributors, not farmers.) On a whim I purchased some dried favas, which went into our pantry and were forgotten.

Running across the favas this week, I decided to test them by making a fava stew. I will tell you what I learned and offer you the recipe, which Nola and I both agree is a keeper.

In the farmer’s field, favas grow in the large pods previously mentioned. They resemble the pods of lima beans or green beans, only much larger. The outer pods are usually removed and discarded. Each pod yields three to eight seeds which are referred to as fava beans or broad beans.

Like all beans, each fava within the pod has a skin, an outer covering, also called a peel. However, unlike other beans, the fava skin is a source of controversy.

In most countries, fresh favas are eaten or go into recipes without removing the peel. As the Wall Street Journal sniffs in Francophobe fashion, “Only in France do they call for peeling the beans.” There go the French again, making more work for the cook! Huff Post is more sanguine, saying it’s no big deal, and offering their advice for easy peeling of the beans.

It’s undeniably true that as the beans mature, they not only grow larger but the skin becomes tougher and more difficult to ignore. Moreover, once you move from fresh favas to dried beans, the peel is firmer yet, and a good candidate for removal.

As mentioned, I decided to get better acquainted with the beans by making a rich fava stew. I chose a stew for two reasons:
– I wanted the favas to star in a main dish that could also serve as a light meal, rather than as a side veggie.
– A fava stew could include a variety of flavors and textures in addition to the favas.

After surveying a number of fava recipes, I used as my basis a recipe from “Not Eating Out In NY“. I made some changes, including the following:
– I decided to peel the favas to eliminate any rough texture from the skins; the peeling process took about fifteen minutes and was a pleasant meditative activity (and thanks for your help, Nola!).
– I deleted red peppers from the fava stew recipe and instead added a few shakes of shichimi togarashi; shichimi is a very flavorful red pepper powder that is one of Japan’s most popular seasonings.
– I added ham hocks to make the stew more robust as a main dish.

Many fava recipes include lemon, which is a standard ingredient in modern versions of ful medames, a popular Middle Eastern fava recipe. Nola and I preferred not to add lemon to the stew, since we were already introducing a variety of rich tastes.

Here’s a photo diary of my fava stew. Following the photos is a downloadable recipe that includes a vegetarian option. 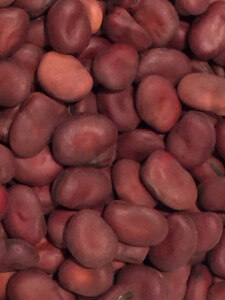 The dried fava beans are maroon, about the color of dried kidney beans but more rectangular in shape 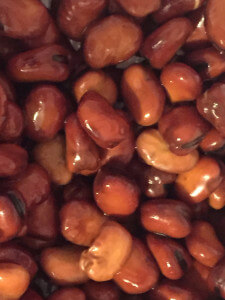 After soaking in water overnight, the beans glisten 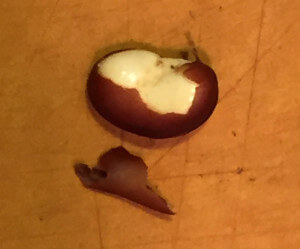 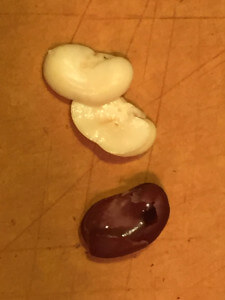 It takes 4 to 8 seconds to peel a bean; some of them may split into halves like this one 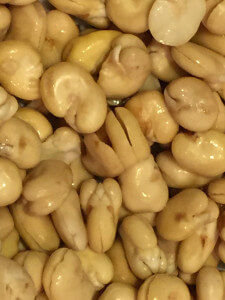 The peeled fava beans are a creamy white in color 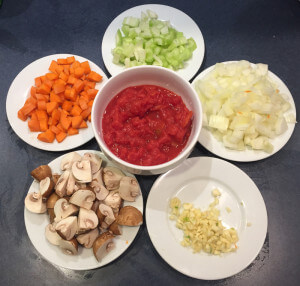 These chopped veggies have been prepped for cooking 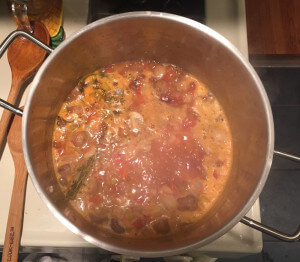 The fava stew wants to simmer happily for several hours 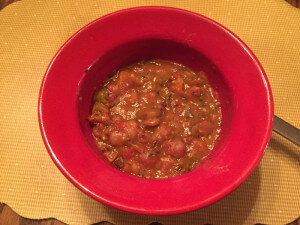 I allowed plenty of time for cooking; that turned out to be a wise idea, since even after four hours of simmering the favas were still slightly crispy. I understand from Internet articles that dried reconstituted favas may need anywhere from an hour to several hours of simmering, depending on the maturity and dryness of the beans.

My recipe using a half pound of favas produced four and a half cups of stew. This may not sound like a lot, but the stew is rich and filling. Nola and I found that a one cup per person portion of stew with some bread and butter made a fine dinner.

Taste-wise, we deemed the experiment a great success. The favas have an earthy flavor that’s a big improvement over white beans. The mushrooms, garlic and thyme balance nicely and the bit of red pepper helps sharpen the flavors. The ham serves mainly to thicken and season the broth – it does not emerge as a prominent taste.

I believe that the fava stew recipe would work well with red kidney beans instead of favas. Kidneys would shorten both the preparation and the cooking times. However, the taste of the stew would change.

In case you’d like to consider this stew for your home collection of healthy food ideas, CLICK HERE for the full recipe. I encourage you to comment if you have improvements or variations to suggest.

If you try or have tried fava stew, I welcome your suggestions!

Image Credit: “Lima Beans” lead image from The Print Shop 2 Collection. Not for download or reuse.