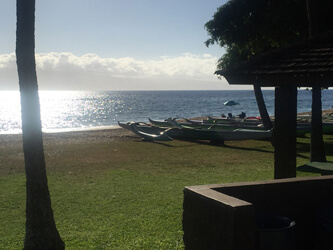 A Maui walk is a healthy (and free) way to enjoy one of the world’s most popular vacation destinations. Here’s a Maui walk with extra attractions: mongooses and zombies!

Nola and I enjoy walking for exercise and our home in Michigan is in a very walkable area. (Malibu was a great place to live, but walkability was not one of its features.) Naturally, when we take a Maui vacation we look for places to walk.

One very nice Maui walk didn’t make that list and that’s the subject of this post. You’ll see a lot of photos, plus a pinch of science along the way.

A Maui Walk with No High-Rises

Maui, especially West Maui, is usually thought of as developed to the nth degree, covered with cement and asphalt. That’s not quite true: all we have to do is look at West Maui’s verdant oceanfront to find a great Maui walk.

The main highway (HI-30, Honoapiilani Highway) hugs the Pacific Ocean for long distances. From south to north, there are these four areas with no commercial development:
– “Southwest”: A 6-mile stretch from the whale watching lookout at Papawai Point to the village of Olawalu.
– “Launiupoko”: 3.5-mile segment from Olawalu to the south edge of Lahaina, the largest town in West Maui and a former capital of the Kingdom of Hawaii.
– “Beach Park Walk”: 1.1 miles from the north edge of Lahaina to the south edge of Kaanapali beach.
– “Kahakuloa”: The long, scary, partially one-lane road from Kapalua that runs 23 miles north around the corner of Maui to the Waihee district of Wailuku.

The Southwest and Launiupoko areas are dotted with a few county parks but don’t offer a continuous walking or cycling path. The Kahakuloa road is beautifully scenic but mostly inland and in any case, not suitable for a stroll.

Maui Walk Through the Beach Parks

This leaves the Beach Park Walk, and it is indeed an excellent short Maui walk, just over two miles round trip. It provides a continuous paved walkway for pedestrians and bicyclists with plenty of shade, right next to the ocean. The walkway passes through two long skinny county parks that are effectively continuous. Those are Hanakao’o Beach Park, just south of Kaanapali, and Wahikuli Park, to the south. The parks have parking lots, rest rooms, picnic tables, barbecue grills and plenty of sandy beachfront.

If you’d like to wander with me in a relaxed way, read on! If you’d like to cut to the chase and get the walking map for your own use, here is all the direction you need, courtesy of Google Maps: 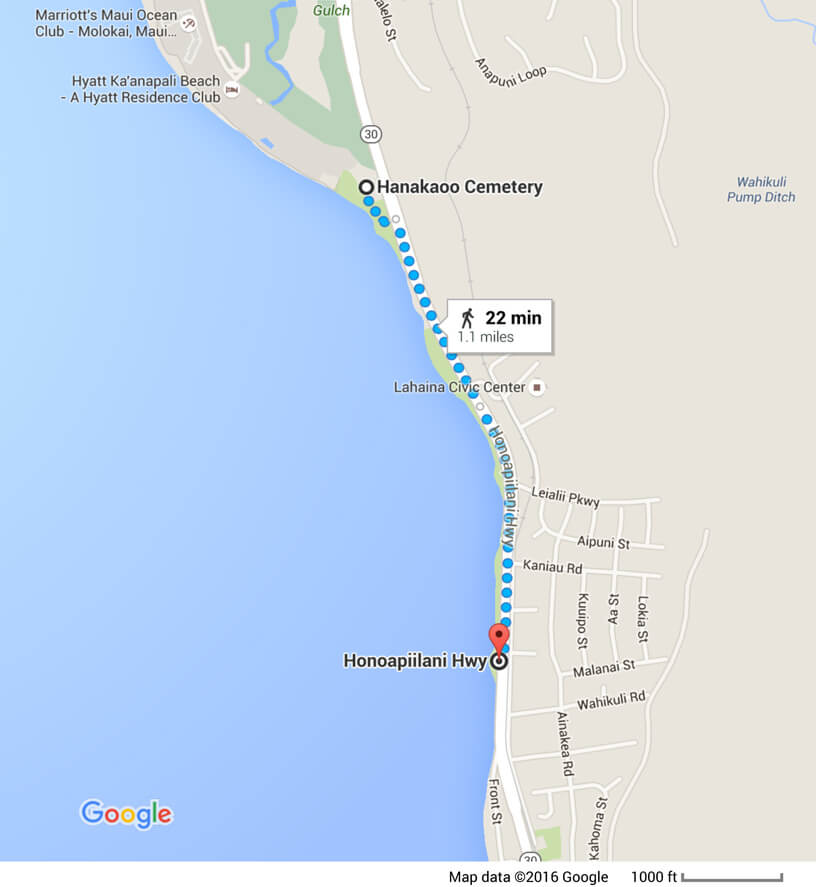 Starting at the north end, this Maui walk provides a civilized path for foot or bicycle. It offers palms, picnic tables, stand barbecues and ocean on your right hand: 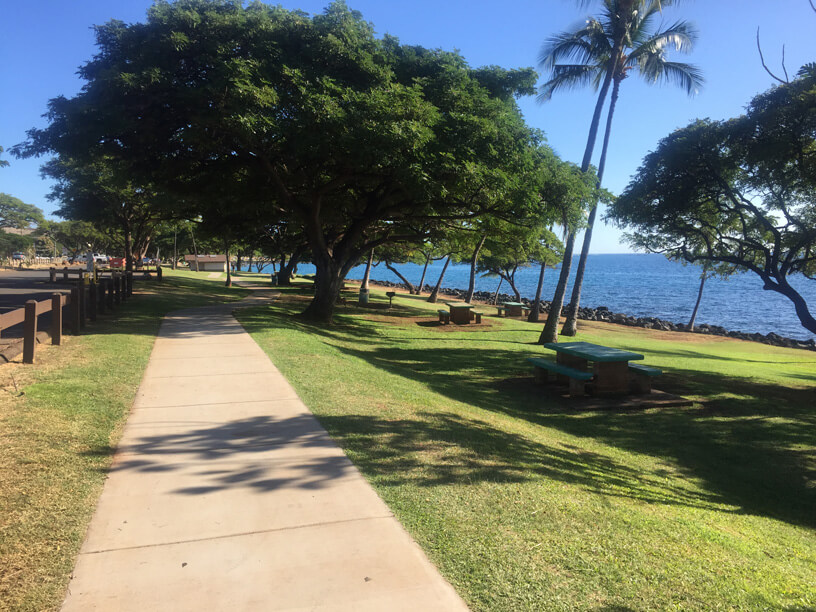 Our most recent walk here, when these photos were taken, was on a Saturday afternoon. Weekends are a popular time for local families to come enjoy the wide sandy beaches: 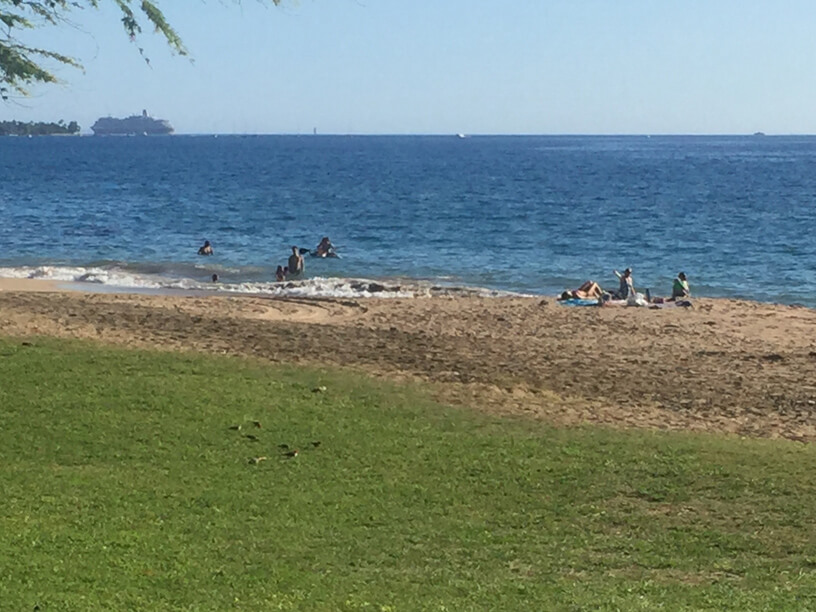 There are rocky stretches as well, like this one anchored by a single persistent tree: 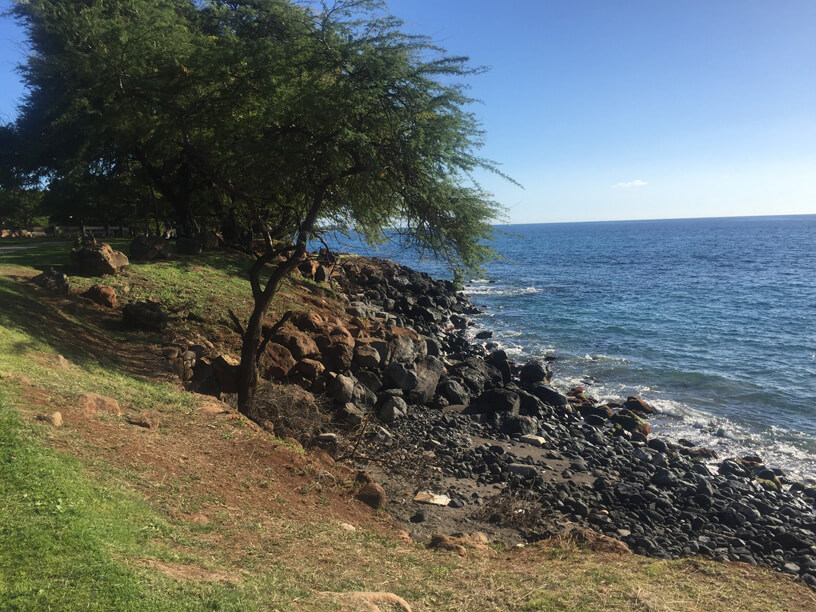 Next to the longer beaches, families can explore tidepools between the rocks: 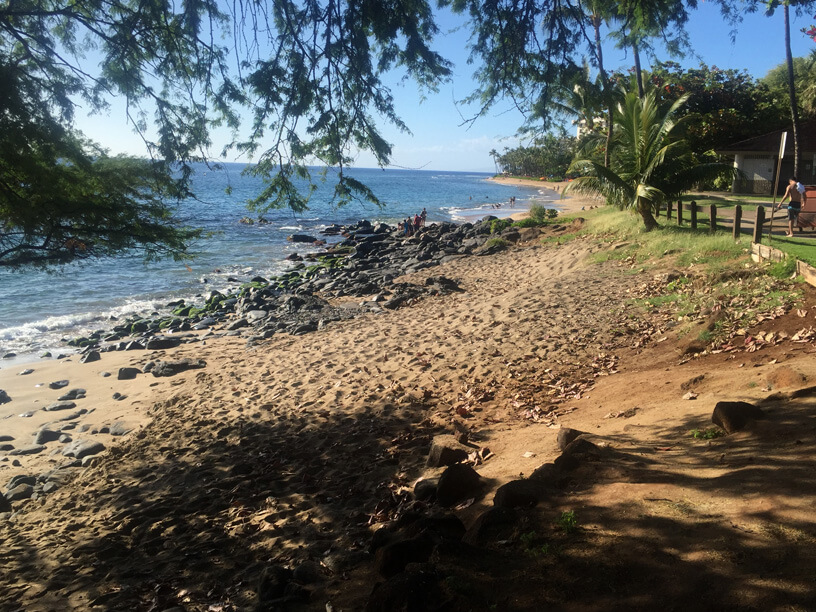 The return path is just as pleasant: 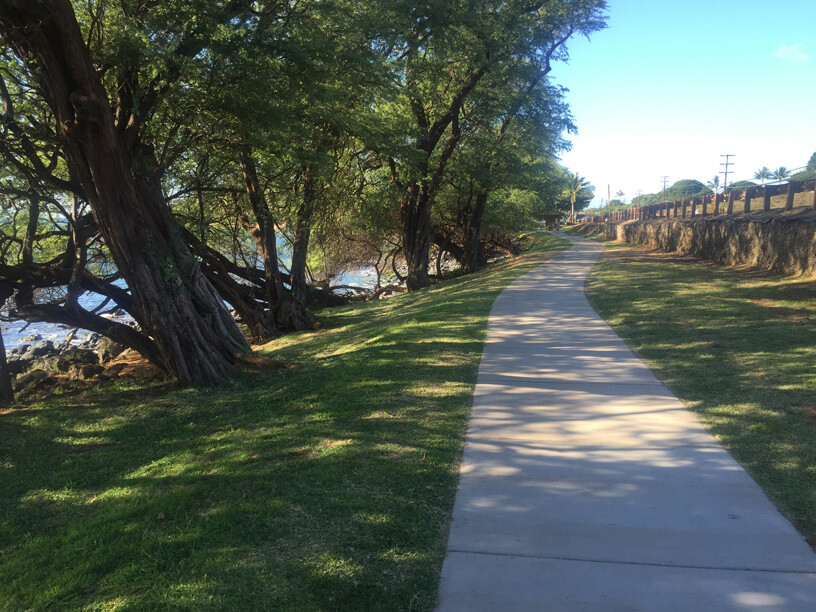 While walking south, Nola and I heard the loud whistling of birds along one particular stretch. Returning northbound, the source became clear. We arrived at a patch of lawn that had a lot of cardinals, we estimated a dozen. We had usually seen cardinals alone or in pairs, so this was a remarkable gathering. Unfortunately, they were spread across the lawn so I can’t show you more than this fine example: 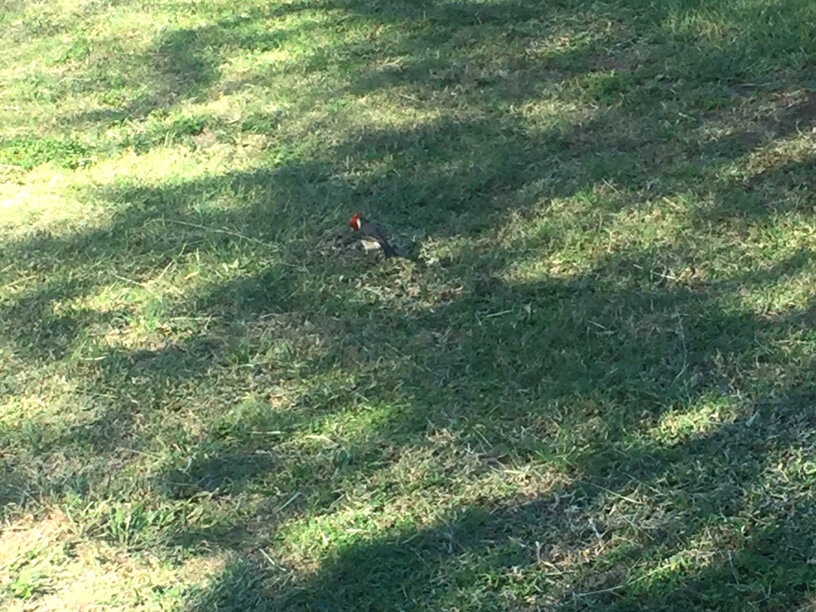 All the birds looked alike: there was no obvious difference between males and females. This did not surprise us, because these are the same red-crested cardinals (Paroaria coronata) that we often see at Honokeana Cove. Both sexes of this species look similar to the human eye, though they appear quite different to the eyes of the birds themselves! You can see a fine close-up of one of the Cove cardinals in the slide show HERE. It is a non-Hawaiian species (from Brazil, around 1930) but none the less beautiful for that.

As you might imagine, when we walked closer the birds took to the air in perfect synchrony. They fled to a single tree overhead from which they proceeded to chirp at us.

Passing by the field of birds, ahead of us we saw a small ground animal. It looked rather like a weasel, or a svelte light brown squirrel with a sleek tail: 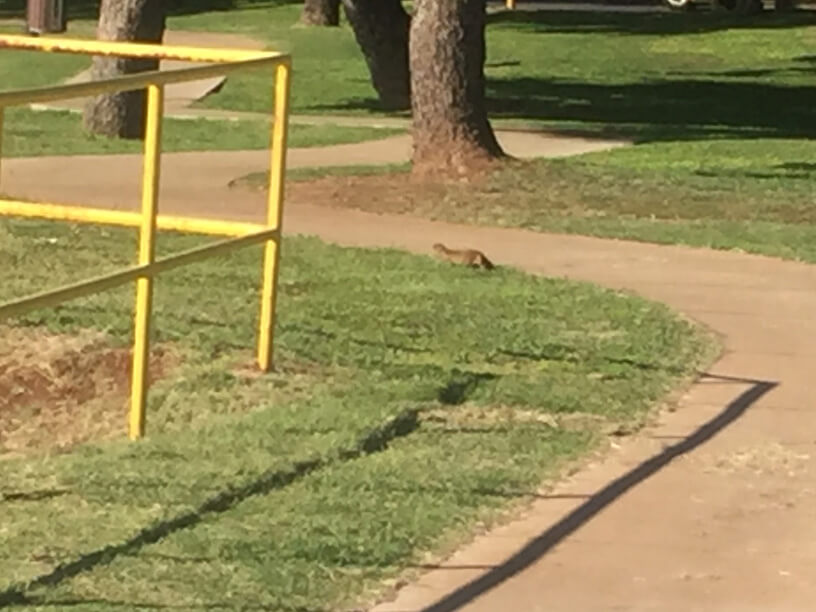 When the critter spotted us he decided to leave the area: 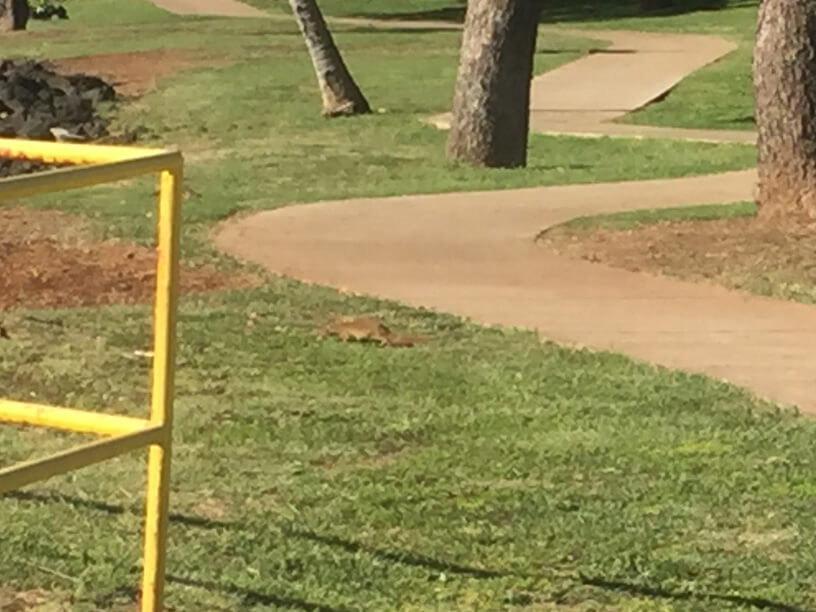 There must be a rule that you never see one of anything, because at the next bend of the path, we saw his or her cousin. The cousin had a somewhat darker pelt: 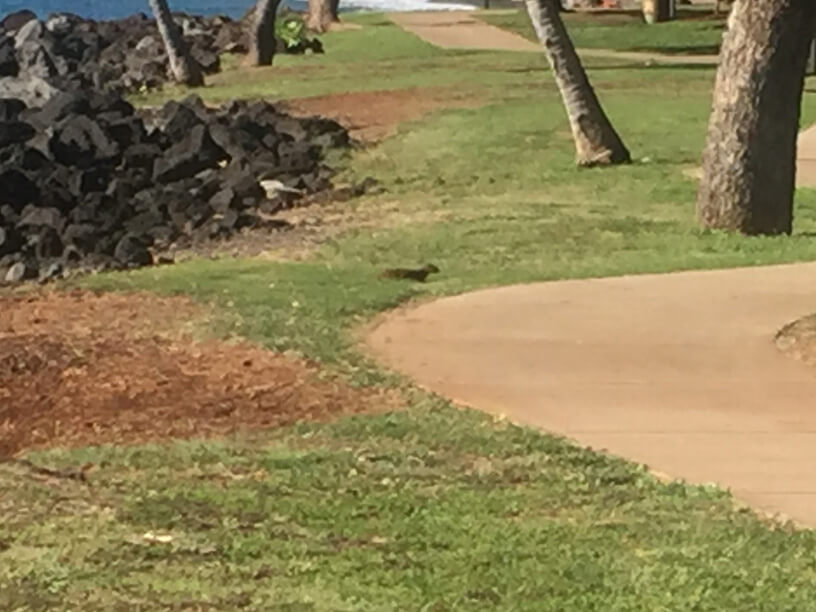 As we continued to approach, the cousin sprinted away very gracefully, stretching his legs as he went: 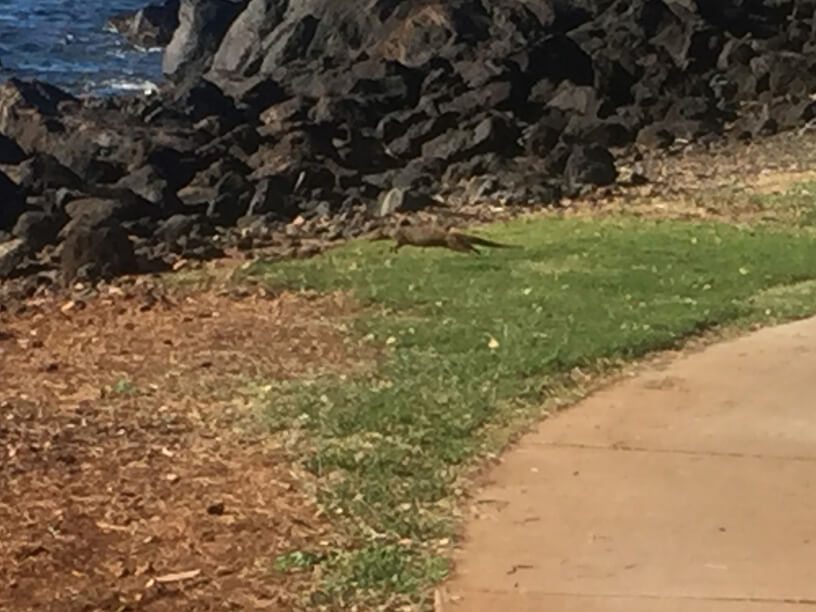 Here’s an eye test for you: can you see the animal in his rocky retreat? Hint: this photo was taken just an instant after the previous one: 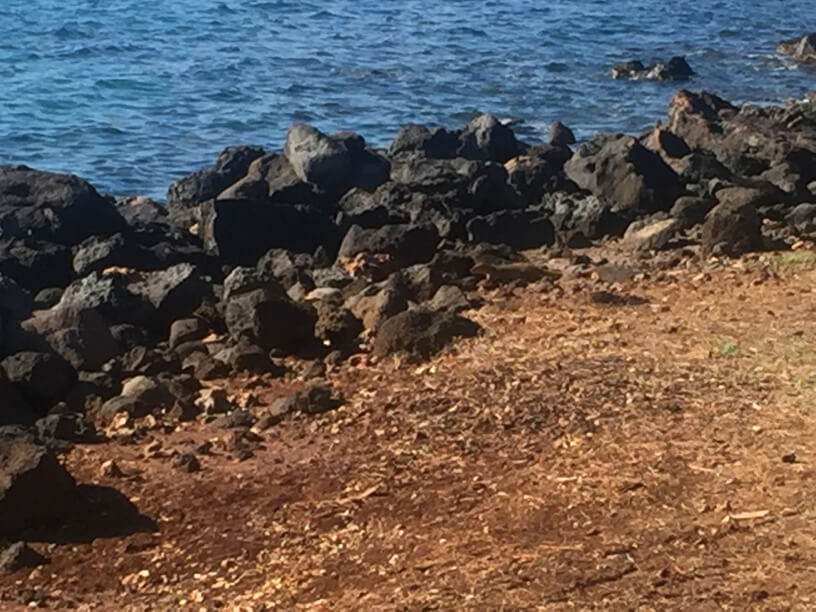 Just to prove that we had not encountered a singular couple, Nature provided yet another mystery animal just up the walkway, in the same area: 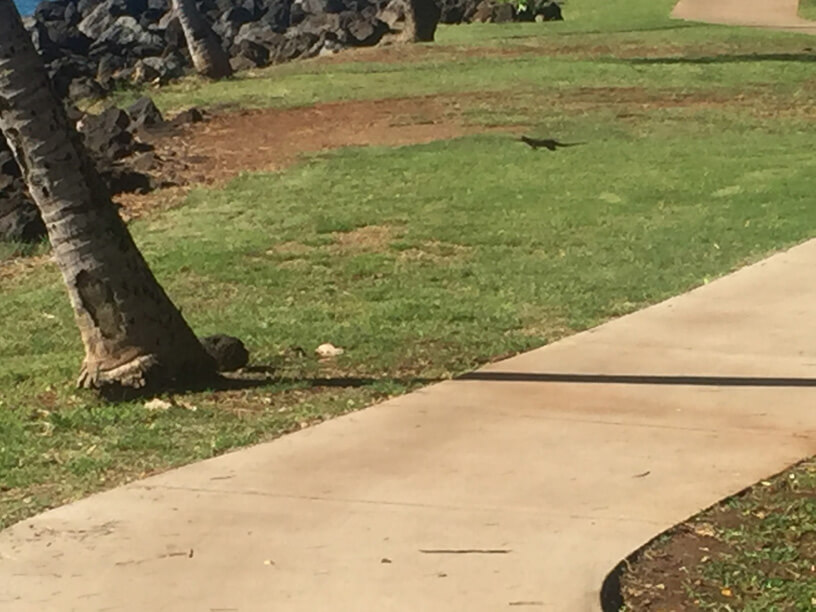 The identity of the critter was easily determined when we consulted the Internet. The small Asian mongoose (Herpestes javanicus) is a weasel-like animal that is endemic to southeast Asia. In the 1800s sugar cane was a major industry for many tropical islands, including Hawaii, and rats were causing great damage to the crops. In hopes of controlling the rats, 72 mongooses were imported in 1883 and distributed to plantation owners.

We have previously discussed the problem of invasive species, who often become established thanks to human activity. In this case, the human activity was to bring an animal to Hawaii without adequately researching the consequences. The difficulty is that mongooses are active primarily during the day, whereas rats are up and about only at night. Thus the imported mongooses rarely encountered their intended prey. What’s worse, rats do not take kindly to a dinner invitation: when another animal tries to eat them they become vicious and aggressive.

The mongooses found plenty of other things to eat. Alas, their diet included the eggs of ground-nesting birds like the nene and the eggs of the endangered hawksbill sea turtle. As a result, today the mongooses are officially a pest and illegal in the Hawaiian islands.

Unfortunately, the animals are either illiterate or scofflaws, since they persist in living in the islands despite their undocumented status. Presumably the mongooses who thrive in the Maui beach parks enrich their diet with leftover hamburger and barbecue scraps from the picnickers.

Maui Walk: The Land of the Dead

Continuing north, we passed once again the rugged tree that had established its home among the rocks: 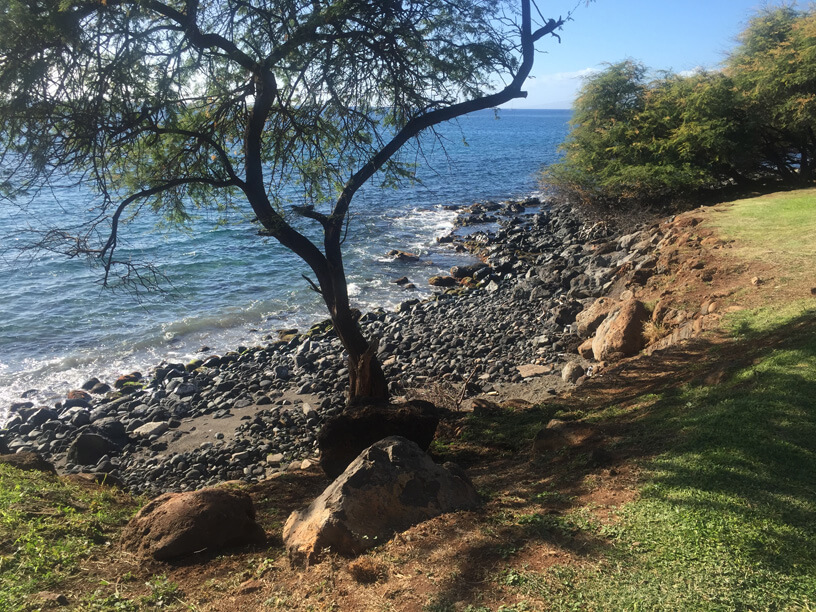 At the north end of the Beach Park walk is the Hanakao’o Cemetery, which belongs to the County of Maui: 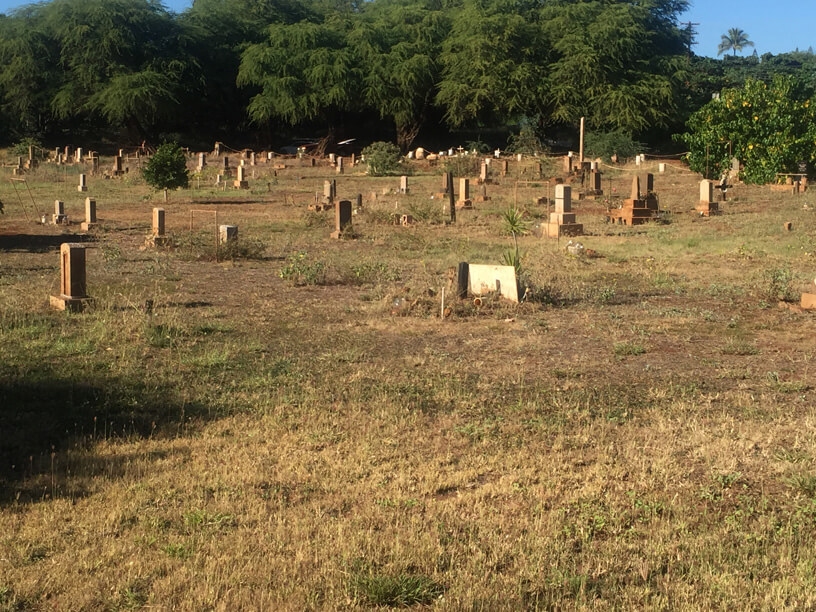 The small Hanakao’o cemetery has grave markers with engravings both in English and Chinese characters. It appears to hold the remains of Asian and Filipino immigrants who came to Hawaii to work on the sugar and pineapple plantations.

Finding so many tombstones here, by the ocean and by the walkway, sparked our imaginations. We visualized twilight during a new moon, when the last rays of the sun have disappeared from the gravesites. A stiff bony arm rises from the ground in front of a marker stone: then another, and another. Entire bodies sit up and break through the surface, then creakily rise to their feet and step forth upon the land. Soon the cemetery is swarming with evil figures!

These are zombies, the undead spectres of plantation workers. They were cut off from their far-away families and toiled in the heat under heartless overseers. They have now risen to wreak their evil vengeance upon us: upon all the Europeans and Americans who brought them here to work for pitiable wages, who wore out their poor bodies, then buried them here at such a distance from their homelands.

The zombies are gathering! Beware, ye haole tourists! Ye absentee property owners! Ye native Hawaiians who allowed the despoiling of sacred lands! Perhaps this is the night the zombies will attack, wielding machetes and knives and shedding the sweet blood of foreigners!

But wait: the zombies look out to sea. And there, right next to their cemetery, is a calm ocean and a beautiful beach, lit under blazing starlight: 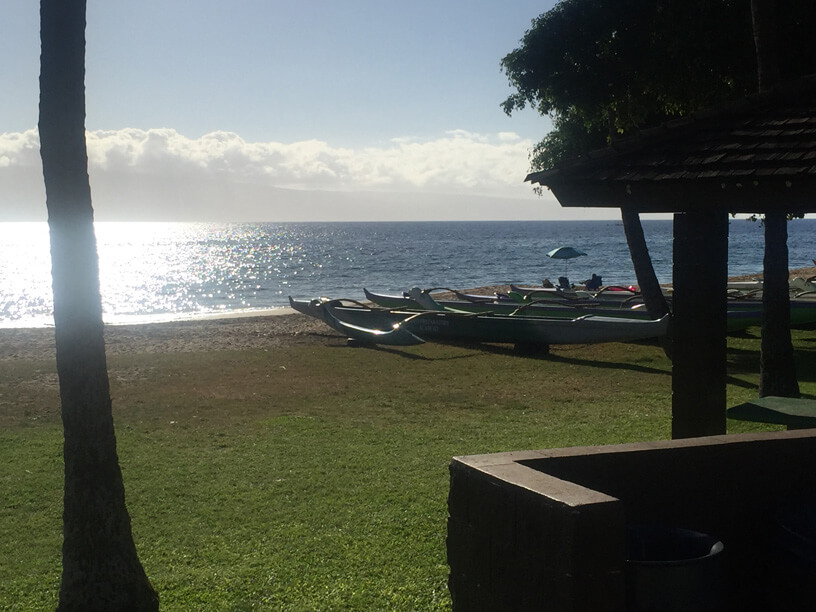 Outrigger canoes are stacked to one side, offering tempting adventures, suggesting a pathway back home for these poor wanderers.

The zombies hesitate, entranced with the beauty, with the heartbreak of the scene. It drains their anger, the magic Aloha of the islands has conquered their bitterness. They sit and rest, staring at the rippling ocean until the first rays of the sun chase them back to their underground homes. Then the Maui walk is once again safe for us to traverse, we of such weak flesh and blood.

Nola and I then arrived at our parked car and said farewell to this Maui walk through the beachfront parks.

A relaxed outdoor walk is a great antidote to pricey tourist attractions and enhances a Maui vacation. For more about Maui activities and Hawaiian culture, see the Feature Stories on our condo website.