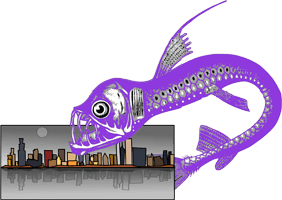 Fish invaders are the unwanted aliens among us. They are forcing their way into coastal zones, rivers and lakes. They are closing beaches and decimating sport fishing. They are driving up costs for shipping companies and electric utilities. These maritime storm troopers live in a realm that we can barely penetrate, yet they can disrupt our lives on dry land.

We might be tempted to dismiss fish invaders as simply one facet of the struggle for survival in nature. However, humans have magnified fish invaders into a monster of a problem. We have made ourselves dependent on the seas for food, transportation and recreation; yet at the same time we have encouraged and enabled the fish invaders that threaten the same key human activities.

This Part 1 blog describes the scope of the marine invasions spreading across the world; Part 2 will describe how humankind is fighting back, using both old and new technologies, with varying degrees of success.

Fish Invaders as Citizens of the World

An earlier blog (Animals Adapt) discussed the remarkable ability of animals, birds and plants to adapt to our changing global climate. And certainly, climate change is affecting marine life too, including marine mammals and fish.

However, this blog is not concerned with climate change: there are other human activities that have directly and unequivocally given great encouragement to the fish invaders that are threatening us today.

I will use “fish invaders” as a shorthand term that embraces not just fish, but marine animals in general. Fish invaders are introduced water-dwelling species that become invasive species. By “introduced” we mean brought into a new area by human activity, whether intentional or unintentional. By “invasive” we mean a non-native species that is damaging the environment, our economy, or our health.

Every list of bad actors has its Wall of Shame, and there’s even a “Top 100” list of the worst invasive species. If I omit animals such as mosquitos, cane toads and tree frogs that spend only a small part of their lives in the water, the list still contains 17 fish invaders in various categories of marine life.

However, the list of 100 was compiled by ecologists; for them, fish invaders who displace native species are, by definition, bad. But many other people would disagree.

Four of the fish are sport and food fish: people purposely introduce them into bodies of water for their own merits, and likely don’t care if the native Appalachian Salamander (if such a creature exists) is adversely impacted. Here are the four, with their positions on the Evil Hundred list: largemouth bass (#54); rainbow trout (#63); brook trout (#82); and Nile perch (#45).

And one more, the mosquitofish (#39), is still being released by mosquito control agencies who believe in its effectiveness. Unfortunately, studies have shown that the mosquitofish suppresses other, native, fish who eat mosquito larvae; the net result is that the introduction of mosquitofish has led to a net increase in the mosquito population.

Thus many non-ecologists – perhaps, economists or fisherfolk – would dispute the presence of twelve fish invaders on the top 100 list. This leaves us with only five undisputed fish invaders among the top 100 invasive species:

Nevertheless, the top 100 is just the tip of the iceberg of fish invaders. There are many also-rans that are generally agreed to cause serious damage to human affairs. We’ll talk about a few of these now.

Sea creatures are born travelers. The finny type swim from here to there, seeking food, safety, mates or perhaps simply sightseeing. Some sea animals like mollusks don’t appear very mobile. However, just about every water dweller has a stage in which they drift with the currents, as larvae, spores, eggs or newborns.

Since the oceans, seas, bays and most rivers are connected with each other, fish invaders are free to spread almost anywhere. When their travels occur over geologic time, Mother Nature maintains a balance by evolving predators that tend to keep the invaders in check. Since climate, salinity and currents vary, each body of water has its own mix of co-habiting creatures.

However, humans make such rapid changes that nature can’t keep up. This is especially evident in the case of canals.

Canals are built to make travel easier for ships, but of course they also provide a superhighway for fish invaders. The Suez Canal has served as a conduit for aggressive fish invaders from the Red Sea to enter the Mediterranean and wreak havoc:
– In the summer, swarms of stinging jellyfish force beach closures throughout the eastern half of the Mediterranean; they also clog the water intake pipes at desalination and power plants.
– Red Sea pufferfish have taken up residence in the Mediterranean; they are extremely poisonous, and kill 10% of the unwary folks who catch and eat them.
– Rabbitfish have migrated into the Mediterranean, consuming algae and displacing more desirable native food fish.

The Suez Canal fish invaders primarily travel from south to north. The canal has no locks, allowing water to flow freely between the Red Sea and the Eastern Mediterranean. The direction of the flow varies with the season and the tides. However, the Red Sea is saltier and less nutrient-rich, so the fish that have evolved there are fierce and aggressive, making them well qualified as fish invaders into the Mediterranean.

Other canals also serve as highways for fish invaders. Parasitic sea lampreys entered the Great Lakes a hundred years ago through the Erie Canal, the Welland Canal and other artificial waterways. They have devastated the population of the lake trout that is so popular with anglers. Besides, lampreys are really disgusting-looking animals.

Asian carp, loathed by sport fishermen and by protectors of indigenous fish, are attempting to invade the Great Lakes from the Mississippi River, by way of the Chicago Sanitary and Ship Canal.

Another major route for fish invaders is hitchhiking. Riding along on a ship occurs several ways:
– Ballast water. When freight ships unload their cargo, they ride higher in the water and must take on ballast water to bring the propeller down into the water and to stabilize the ship. If the ship travels to another port to take on cargo, it pumps out the ballast water at the new location. The ballast water thus transported contains many living creatures, including the larval stage of fish invaders. There are detailed guidelines for managing ballast water to block hitchhiking fish invaders; however, these requirements are just coming into effect and a robust control system is not yet in place.
– Boat hulls. Pleasure boats are often trailered long distances to explore new waterways and lakes. Fish invaders are such a serious problem that NOAA has issued guidelines requiring boats and boat trailers to be clean and dry before entering a new body of water.
– Anchor chains. When a ship deploys an anchor, the anchor chain is a convenient parking spot for some fish invaders such as zebra mussels. The chain locker is a cozy humid environment where fish invaders of the mollusk type can settle down for several weeks while the ship transports them to virgin territory. Here again, cleanliness is the prevention method of choice.

We can see that dozens if not hundreds of fish invaders are pressing hard to enter new bodies of water where they are not wanted. Part 2 of this blog will describe the energetic efforts of marine scientists and ecologists to, so to speak, stem the tide of invasion.

If you fish for sport, have you encountered unwelcome fish invaders on your lines and in your nets?