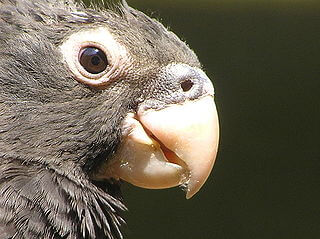 Smart birds are continuing to surprise both bird-watchers and animal psychologists.

The smartest birds are thought to be as intelligent as the smartest of animals, including dolphins, whales, great apes and probably some people as well. And they don’t have to attend a human-run school, either!

This blog discusses smart birds who show amazing skills both in the wild and in captivity. Moreover, in some cases they even exhibit analytical reasoning!

Just like people, animals need vitamins and minerals to sustain their health.

We have previously discussed Clara Davis’ famous study of young children. Left to themselves they instinctively chose to eat a well-balanced diet. (See Science Speculation section in my earlier blog Why Diet Drinks Don’t Help You Diet.) In contrast, as adults we tend to ignore our inner voices. Instead, we use advertising and word-of-mouth to decide when we need to bolster our normal foods with additional vitamins and supplements.

Animals seem to have built-in knowledge of what they need to eat for their health. This is the sort of behavior we call instinct rather than intelligence. Scientists know that animals regularly visit salt licks or mineral licks. Also, some animals eat mineral-rich dirt to acquire calcium, magnesium and other elements. Thus a basic element of survival for many animals is the ability to seek out animal minerals and animal vitamins.

Birds also seek out minerals, especially calcium that they need to produce eggs with strong shells. However, we will now meet one of the truly smart birds, a parrot that not only finds but also manufactures its own dietary supplement.

Our newest champion among smart birds is the Greater Vasa Parrot. Its handsome face and beak appear at the beginning of this blog.

This parrot is normally a light charcoal gray. However, the females show starkly different coloration during mating season. It is a big bird – 20 inches (50 cm) from head to tail!

Greater vasa parrots are not normally kept as pets. They are active by nature and so large that they need a lot of space to fly, stretch and play. They are extremely vigorous eaters. You should not try to hand-feed one because their feeding response is so aggressive. (Ouch!)

The greater vasa parrot is native to Madagascar and the nearby Comoros Islands. Although they have been observed in the wild their behavior is not well understood. Consequently, a recent study of 10 parrots at the Lincolnshire Wildlife Park in UK yielded unexpected and interesting information about these smart birds.

When mating season approaches, these parrots naturally seek out sources of calcium to strengthen their eggshells. Those sources are typically sea shells or the pits of fruit such as dates.

You might expect only the females to bulk up with calcium. However, the males seek out this mineral even more than do the females. The reason appears to be that as part of the mating ritual, males regurgitate food to feed the female. Thus, the female in fact gets the dietary benefit of the male’s foraging work. The female controls the mating process in these birds, which is appropriate since she apparently knows when she needs more calcium in order to safely lay eggs.

However, acquiring calcium is not easy for these birds. The parrots have to nibble the shells or date pits with their beaks. This causes beak wear and may also be uncomfortable for them.

The researchers spent eight months at UK’s Lincolnshire Wildlife Park observing and filming a group of ten greater vasa parrots. They found that five of the ten birds used pebbles or date pits as tools to process cockle shells to obtain calcium. Sometimes they would scrape the shells to obtain a fine powder, which they would then lick. (The second of two videos posted by the researchers begins with a sequence in which a parrot uses a pebble to scrape inside a shell. He then seems to lick the shell before picking up the pebble to continue work.) The birds would also use a date pit as a wedge to break off small pieces of shell that they could then eat.

This report is the first observation of tool use by these smart birds. More importantly, it’s the first known instance of any animal using tools to produce a dietary supplement. The fact that the parrots have alleviated their problem of beak wear is yet another bonus. Smart birds, indeed!

The family of smart birds has yet another member worthy of our attention.

The New Caledonian Crow is, as the name indicates, native to New Caledonia. This is a group of islands between and to the north of Australia and New Zealand. A former colony of France, at present New Caledonia is a “special collectivity” gradually acquiring full independence from its parent. 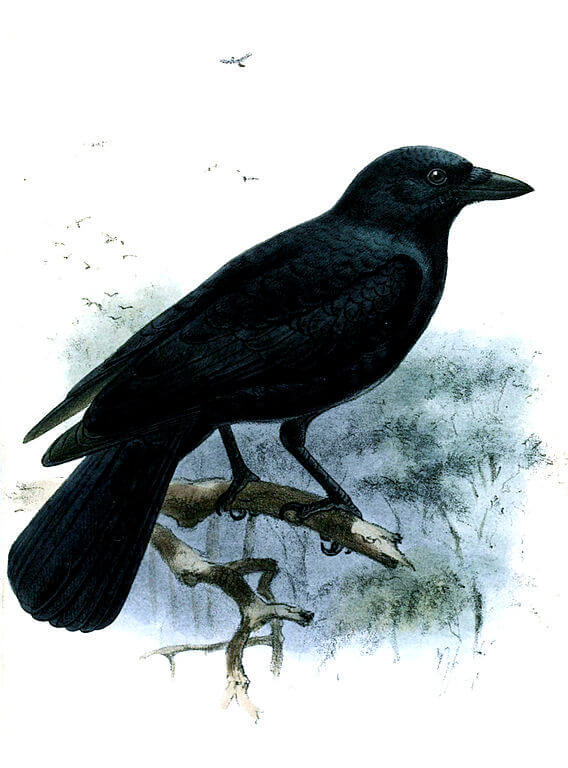 This crow is more moderately sized than the vasa parrot. The New Caledonian crow is about 16 inches (40 cm) in length. It’s similar in size to the house crow but chunkier. In its home territory it is commonly called the “qua-qua,” a name that resembles its distinctive cry.

Many animals are able to use tools, especially for acquiring food. Apes and monkeys in particular often use animal tools in the form of sticks to forage for termites or honey. Similarly, a number of smart birds are known to probe crevices with various sticks in order to extract grubs for food.

This crow is famous among animal psychologists for behavior that goes far beyond tool use and rivals the analytical reasoning shown by primates. The New Caledonian crow can use “meta-tools”, in which one tool is used to obtain or manipulate another. Moreover, it can create tools from material (metal wire) that the bird had never before encountered.

The newest work shows that New Caledonian crows not only select and use tools, but they specifically fabricate the tool shapes that best serve their purposes. And the technology used to observe these crows in the wild is almost as fascinating as the results that were found.

The researchers noted that although these birds are well known for using specialized tools, there was almost no scientific data on how they constructed them. The lack of data is due to the fact that they are shy and difficult to observe in the wild. Therefore the scientists assembled miniature video cameras that they could attach beneath the tail feathers of a bird.

This information got my attention and probably grabs yours as well. The universities and the New Caledonian government both gave ethical approval to the researchers. However, the birds themselves didn’t get to vote on what would be attached to their bodies!

The details in the report show that the scientists tried their best to treat the birds according to some version of the Golden Rule. They trapped nineteen crows and equipped them with video cameras that would record their behavior for several days using built-in batteries.

The cameras weighed less than 5% of each bird’s weight. The attachment for the cameras was rubber tubing that deteriorated in about one week, allowing the device to fall off. The cameras parted company from the birds after 3 to 15 days in these experiments. The video equipment fell to the forest floor. And since each one incorporated a VHF radio tag, the researchers could then retrieve it.

Using this amazing technology, basically a Crow GoPro, the scientists were able to collect videos from ten different birds. They obtained more than ten hours of useful video footage. In these videos they found four of the crows using tools extensively. They estimated that in general, almost 20% of foraging behavior by these birds involves the use of tools.

The videos also recorded the birds manufacturing hooked sticks for retrieving insect food from narrow places. A bird would select a Y-shaped stick and bite off the base of the Y and most of one of its arms. This left a long stick with a V-shaped bend at one end. The bird would then trim the end of the stick to create a sharp hook that could drag reluctant grubs out of their hiding places. It took only about a minute, start to finish, for a crow to create an optimized food-fetching tool.

Both the observation of this smart bird’s tool fabrication and the video technology used make this study especially noteworthy.

Smart Birds: Their Place in the Hierarchy of Intelligence

You might say, OK, so these are smart birds. But they are still “bird brains,” aren’t they? And aren’t my dog, and my cat, and even my pony a lot smarter?

Let’s take a quick look at the hierarchy of intelligence among our fellow creatures.

We need to start with a caution. Intelligence is very hard to define, especially when the animal we are studying can’t talk to us or (usually) fill in multiple-choice questionnaires. Worse than that, even when you restrict the test arena to humans, there are serious questions about the validity of all measures of intelligence. (See the discussion of psychologist Allan Edmund Edwards in the Science Speculation section of my earlier blog, Dumb and Dumber: Our Declining IQ.)

Nevertheless, the media periodically gets excited about one smart animal or another. Therefore, it’s a fascinating question to try to compare the intelligence of different animals.

I don’t have a scientific answer to this very subjective question. However, I do have a great discussion to refer you to. It’s a blog by Alex K. Chen on Quora addressing the question “What is a good list of animals ordered by intelligence?”

Chen’s full article is interesting to read because he tries to compare quite different behaviors and place them on a single linear scale. He does acknowledge that this is an arbitrary simplification of a complicated situation.

How Smart Are Animals, Anyway?

To whet your interest I will give you my brief summary of Chen’s list of animals, grouped in “tiers” from most to least intelligent. Within each tier, Chen expresses opinions but does not try to give a complete this-one-is-smarter-than-the-next-one ordering.

Thus the smart birds we have been discussing – the greater vasa parrot and the New Caledonian crow – rank very high in the list of intelligent animals. It’s not an overstatement to say that within the context of their lives and surroundings, these smart birds are equal to or superior to most other animals, including I dare say many of our own species. If you doubt that statement, how would you manage to live in a tropical jungle, eating nothing but bugs that you find for yourself? OK, perhaps you are a true outdoor survivor, but I know that I wouldn’t do so well myself!

Smart birds are all around us! If you keep your eyes open you may see crows, parrots and a few other birds doing things that seem downright clever.

This blog is referenced on the Meaning of Life cornerstone page. That’s because a sensible meaning of life needs to reflect reality. Our relationship with other humans makes empathy and affection core values. And the surprising intelligence of animals suggests that they may also deserve a healthy amount of our respect!