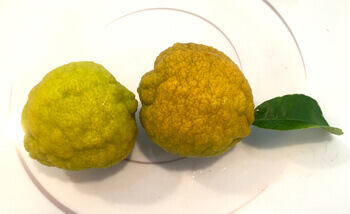 The Rough Lemon offers strong, fresh flavor to mixed drinks and island recipes. This bumpy citrus is 2.5 to 3 inches in diameter (6 to 7.5 cm) and you may find it in farmers’ markets in Hawaii. My familiarity with it comes from a large rough lemon tree at Honokeana Cove in West Maui. It’s not only a healthy food. It has an offbeat appearance that will fascinate your friends, and win a place in your heart.

Note added 2/7/2019: My original blog identified the fruit as a Kaffir or Makrut Lime. However, I was mistaken. Kaffir limes are only about 4 cm (less than 2 inches) in diameter, too small to be the fruits we grow at Honokeana Cove. Thus I’ve concluded that its correct name is “rough lemon.”

What is a Rough Lemon?

The rough lemon (Citrus jambheri) is one of many hybrids in the lemon family. The Purdue horticultural site identifies it as originating in northern India, from which it spread to many other countries. And Wikipedia states that it is a hybrid of the mandarin orange and the citron. It is a popular “dooryard” fruit tree in Hawaii and other tropical locations.

The term “dooryard” was not familiar to me, but I find that the term is deep with Anglo-American history. An article by Gregory LeFever traces its history to Elizabethan times. English colonists to America brought with them the tradition of a fenced garden around the front door of a farm home. There, the “woman of the house” would raise fruits, vegetables, flowers and medicinal plants for the benefit of her family. Additional details appear in an article by the Harvard Arboretum.

Today, “dooryard fruit” describes trees that nurseries sell for home gardening, especially in warmer climates. And the rough lemon is familiar in Hawaii as a popular lemon to grow and use at home. During our Maui vacation this year we were fascinated by the large rough lemon tree at Honokeana Cove, laden with fruit.

Like other citrus, the rough lemon starts out green and then turns yellow if you leave it on the tree to ripen. You may use it in either state. A rough lemon is storable at room temperature for a week and in the refrigerator for a month. A rough lemon yields 3 to 4 tablespoons = 1.5 to 2 ounces of intensely flavored juice and has many seeds. In contrast, a typical supermarket lime yields 1 ounce of juice, and a lemon gives 1.5 ounces of juice. 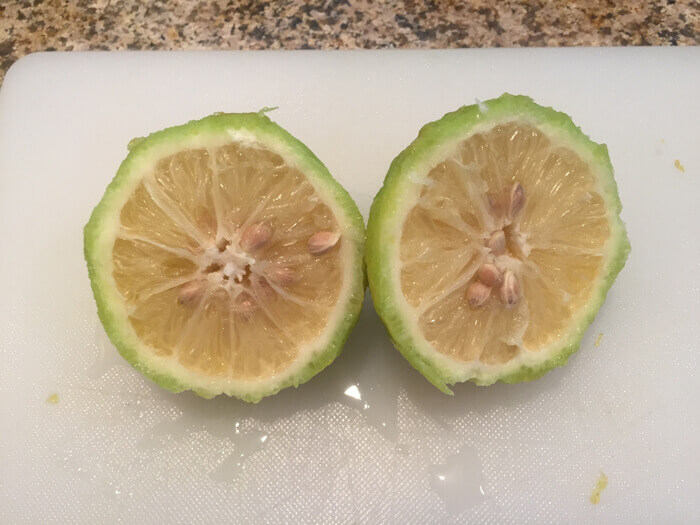 A rough lemon and its abundant seeds

A Bounty of Rough Lemons Overhead

At Honokeana Cove, the west Maui property where our condominium resides, this odd-looking fruit drew my attention. Besides numerous flowers and banana trees, there is a large and productive rough lemon tree on the grounds. Furthermore, this winter the tree was abundant with fruit, piquing my curiosity. 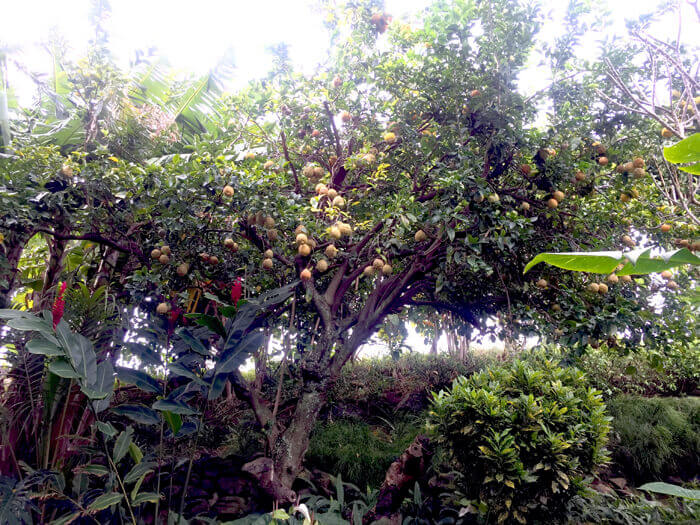 Others more knowledgeable were ahead of me in this area. Our groundskeeper Juanito, a Filipino, gladly takes some of the fruit home to his kitchen. Also, our daughter Dana Bell found that the rough lemon makes a piquant and tasty margarita. And finally, Andrea Nguyen, a Californian who blogs about Asian culinary traditions, has a fascinating blog about making a do-it-yourself citrus vodka2 with another bumpy and healthy food item, the kaffir lime.

Last month as I experimented with variations of the lemon drop martini, I passed under the rough lemon tree and felt a (figurative) bonk on the head. In a flash I had the vision of creating an integrated version of that cocktail by using the rough lemon in all three roles: citrus infusion, juice and garnish. 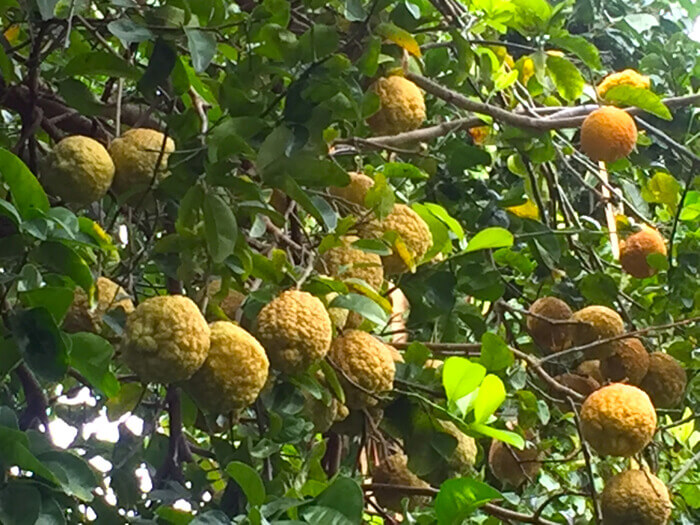 A winter harvest of rough lemons

It was the work of a moment to scale the hillside and harvest some low-lying fruit with kitchen shears.

The infusion of rough lemon into vodka turned out to be quite simple. A cheese grater converted the rind of one fruit to a pile of yellow and green shreds. 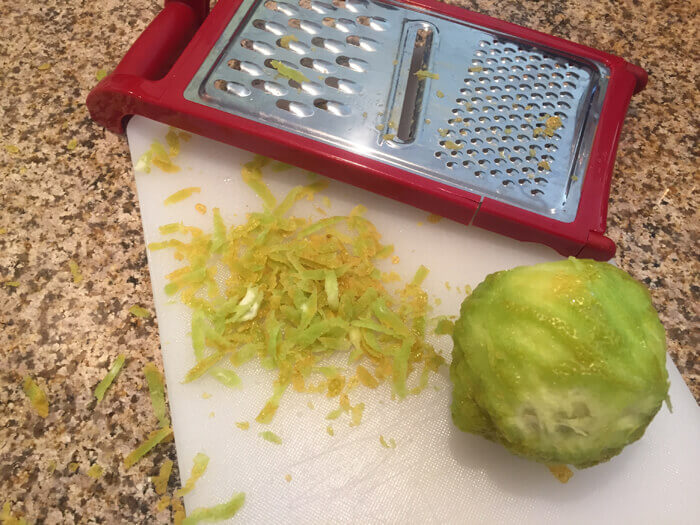 The grated zest of a rough lemon

I steeped the rind in one cup of vodka in a pyrex measuring cup at room temperature, stirring the mixture every half hour or so. The vodka rapidly extracted both color and flavor from the fruit. After one hour the zest infused the vodka and the green parts of the rind became yellower. One additional hour of soaking imparted only a little more color and taste to the vodka, so I removed the rind at that point.

OK, so we have an exotic version of a citrus vodka. What about its taste?

My Ketel One Citroen vodka has the flavor of lemon rind. It is lemony and a bit bitter when taken straight, but makes an excellent mixed drink. However, the rough lemon vodka offers another experience. It has a strong citrus flavor, different from and not as bitter as the Ketel One product. And the rough lemon vodka also works well to make a lemon drop martini.

On your next Maui vacation, or wherever you may be in Hawaii, I encourage you to try infusing your own lime vodka!

What if I Don’t Have a Rough Lemon?

Many people in tropical climates grow rough lemons in home gardens. However, since the tree dislikes freezing weather, Americans and Canadians may not find rough lemons readily available where they live.

Standard supermarket limes and lemons are between 1.5 inches (4 cm) and 2 inches (4 cm) in diameter, somewhat smaller than the rough lemon I was using. Supermarket citrus fruits vary widely in the amount of juice they produce and you may need. In addition, they mostly have thinner rinds with less flavor. Generally, if you use two supermarket fruits they will provide the same quantity of material and flavor as one rough lemon for the following recipe.

The previous blog (Lemon Drop Martini, with Hawaiian Enhancements) discussed the proliferation of sugary pseudo-martinis. Then it gave the rationale and previewed the recipe for a lemon drop martini that incorporates certain changes:
– Partial substitution of gin.
– Changing the rim condiment from sugar to the sweet/salty Li Hing Mui powder.
– Using rough lemon for the infused vodka, the juice in the drink recipe and the garnish.

The full instructions for this drink appear in the recipe for the Lemon Drop Martini (Hawaii Style), which appears below. If you click the image, it will open a PDF version that can be downloaded. 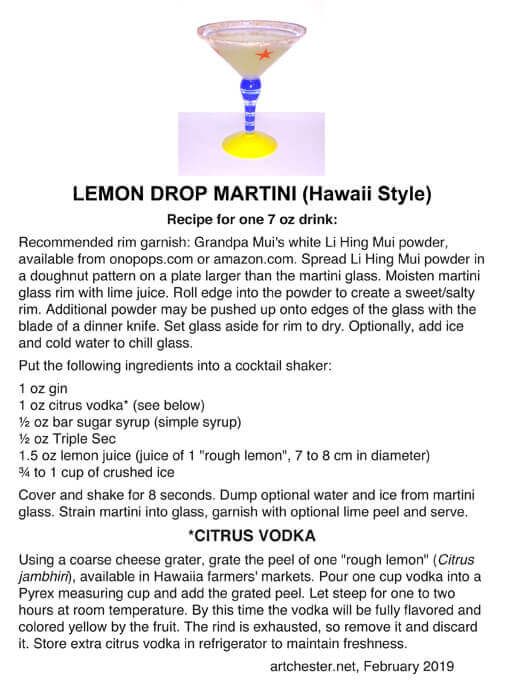 I invite you to try some or all of the improvements contained in this recipe, and let me know whether you like them!

Have you noticed rough lemons at your local farmers market or specialty market? Their bumpy shape is easy to spot, and they are worth looking for. They are a useful additional flavor to try in your cookery.

Sources for the Rough Lemon:
– Rough lemons may be available at farmers’ markets in Hawaii and other tropical locations.
– Rough lemon trees are stocked by nurseries in warm climates, and available by special order in most U.S. states.