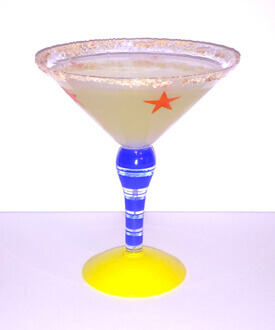 Lemon drop martini, anyone? Hawaiian enhancements can bring this cocktail to an entirely new level! Note added 2/7/2019: In this and the following blog, I have corrected the name of the Hawaiian fruit from “Kaffir Lime” to “Rough Lemon.”

What is a martini?

Traditionally, a martini consists of gin plus dry vermouth and not much else. However, today the word martini seems to apply to mixed alcoholic drinks that have little in common with the original meaning.

The Martini as Fruit Punch

I am not tempted when a restaurant offers me a selection of drinks called “martinis” whose primary ingredients are fruit juice, sweet liqueur and vodka. Rather, I am distressed that such restaurants have turned a savory, tangy drink into a spiked fruit punch that I don’t find enjoyable. It’s also annoying that these drinks often earn a high profit margin for the bar. The “martini” name apparently lends a sophistication that justifies an inflated price. Moreover, the beverage itself contains little of the more costly alcoholic ingredients. Instead, the glass contains a lot of cheap syrup, juice or seltzer.

A quick Google search on martini menu showed typical examples of this evolution, or rather degeneration, of the modern-day martini:

Not All That is New is Nasty

Although the traditional martini is hard to beat, curiosity drove me to explore some nontraditional forms. Every once in a while I encounter a combination of flavors that I love. So I admit to enjoying some “martinis” that are not strictly old-school:
– “Dirty” martinis, with added juice from green olives.
– Pear martinis.
– Aviation cocktail. And:
– The Lemon Drop Martini, the subject of this blog.

The lemon drop martini is credited to Norman Jay Hobday of San Francisco in the 1970s. The “drop” in the name is a tip of the hat to lemon drop candy.

A standard recipe for this drink specifies citrus vodka, triple sec and lemon juice. The drink is served straight up in a martini glass rimmed with sugar and garnished with a lemon slice. The ratios of ingredients may vary, and part of the triple sec may be replaced with simple syrup.

For me, the standard recipe makes a lemon drop martini that’s too sugary and lacking in flavor. However, the drink can be immensely improved by three changes. One change is simple and the next is not-so-simple. The third improvement is only for the quaffers with dedication.

Improvement number one is to replace part of the vodka with gin. I personally enjoy the taste of gin and for me a good mix is equal parts of gin and vodka. This re-positions the cocktail partway toward a traditional martini. The gin adds a great deal of flavor to the drink, while adding neither calories nor alcohol content.

I know some people who are totally averse to the taste of gin. (In the case of one friend, his dislike dates back to a moment of teenage excess.) But if you’re not one of those anti-ginners, I suggest trying this drink with at least a portion of gin in the recipe.

Improvement number two is to modify the sugar rim. The drink itself achieves an excellent balance between tart and sweet, rather like a tart lemonade or an Arnold Palmer. However, when you add the usual heavy rim of sugar you have changed a libation into a dessert.

Obviously, one could omit the sugared rim or reduce it to a mere dusting. However, during our Maui vacation this year I learned that the Hawaiians have found a better approach.

There is a tangy foodstuff called li hing mui that the Hawaiians brought in from its original home in Guangdong Province, China. Li hing powder is a dried, ground-up plum skin that is simultaneously sweet, sour and salty. The Asian aisle in Hawaiian supermarkets features many snacks and candies with “li hing” flavoring. Children sprinkle li hing powder liberally on fruit, sour candies, popcorn and shave ice confections.

Go for the Natural

I felt much better when I found a more natural product on the market: Grandpa Mui’s Li Hing Mui powder. It’s made by Onopops1 and sold at markets in Hawaii. For mainlanders, it’s also available on Amazon.com. The white powder contains only dried plum, cane sugar, Hawaiian salt, licorice, and Chinese 5 spice. 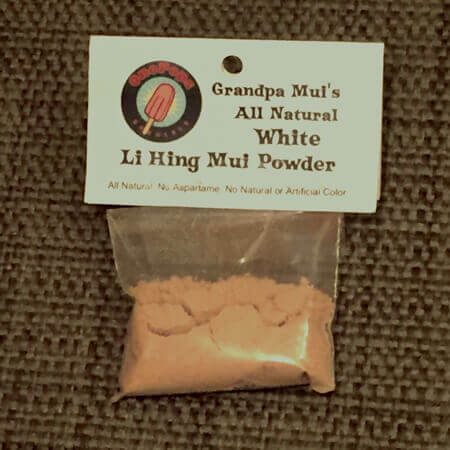 Some Hawaiian bartenders rim margarita glasses with li hing powder rather than salt, to cater to local tastes and as a novelty for visitors. I find li hing too sweet to use on a margarita glass where plain salt is the traditional rim. However, I find Grandpa Mui’s version to be “just right” to rim a lemon drop martini. Its sweetness echoes the lemon drop drink, while its saltiness counters the sugar and clears the palate between sips.

The photo below shows glasses rimmed with sugar and with li hing mui powder. As a theoretical scientist, my manual skills are modest and therefore both rim decorations are somewhat irregular. The granulated sugar spreads more evenly than the li hing, however both do a fine job of garnishing the rim. 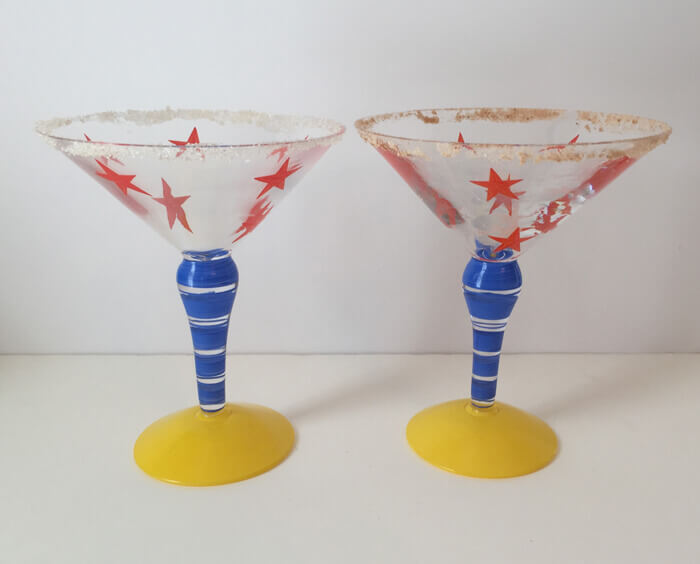 Improvement number three is to prepare your own citrus-infused vodka, specifically a lime vodka.

Why would we assume that you and I, greenhorns in the vodka business, can improve on the many citrus-flavored vodkas on the market? Consider the following:
– The standard lemon drop martini recipe calls for citrus vodka, added lemon juice and a lemon slice as garnish. How harmonious and apropos it would be to obtain all three from the same fruit!
– We have already given this drink a Hawaiian flavor by using a favorite island condiment instead of a plain sugar rim. Why not go one step further with a Hawaiian citrus source as well?
– The Hawaiian citrus I have in mind the “rough lemon” (Citrus jambhiri). It is a popular “dooryard” fruit tree in Hawaii and the tropics and often seen in farmer’s markets. It is readily available in Hawaii when on vacation and, as we shall see, is eminently suited to provide flavored vodka, juice and garnish for a fully Hawaiian styled lemon drop martini.

Alas, this last step to achieve the perfect lemon drop martini runs us out of time and space for this blog. Next week’s companion blog will tell the rest of the story.

Nevertheless, it would be cruel to bring you this far without “the answer“! Therefore, I have appended next week’s recipe HERE in case you cannot wait to try out this heavenly beverage.

If you enjoy cocktails, what balance do you prefer between sweet and savory (non-sweet) beverages? How do you feel about this blog’s approach to the lemon drop martini?