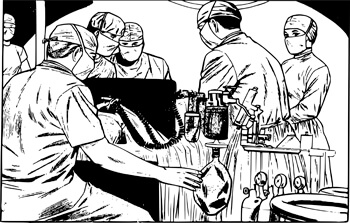 Anesthesia drugs used in hospital surgery are rightfully a source of great concern. This blog post describes my experience with the anesthesia process and what you can expect.

The first three parts apply to virtually every reader of this blog:
– 1: What Everyone Must Know – hospital documentation and infection prevention
– 2: That Scary Anesthesia (This Post) – minimizing the risks from anesthesia
– 3: Recovery & Departure – what you can expect after waking from surgery
The final two parts apply to men only, especially men over fifty. They talk about my specific surgery:
– 4: Prostate Enlargement Versus Cancer – problems of the prostate and their cure
– 5: Prostatectomy Cures BPH – prostatectomy as the definitive cure for an enlarged prostate, also known as BPH

We’ll now discuss the risks associated with anesthesia, and how hospitals control those risks in order to achieve surgery success.

Surgery requires anesthetic, which may be of several types:
– Local
– Regional (such as an epidural)
– General

My surgery required an abdominal incision and was fairly complex. For those reasons, my surgeon opted for general anesthesia. General anesthesia completely knocks you out, and this invites all kinds of concerns and questions:

Anesthesia: What’s the Chance of Death?

Michael Jackson died from inappropriate administration of propofol, a commonly used general anesthetic. One obvious question is, what’s the chance that I simply won’t wake up?

Fortunately, the death rate for general anesthetic is pretty small: about 1 in 100,000. As recently as 1990 it was ten times higher, but that is still pretty low.

Is Propofol a Bad Actor?

My personal experience with propofol, long before Michael Jackson’s demise, made me worry about it. Fifteen years ago bone spurs were causing muscle damage in both my shoulders. I had the condition corrected in two operations a week apart. I woke up very quickly from one operation. However, after the second one I took hours to awake and was groggy for a day afterwards.

At the time I wondered, what was the difference in the operations? When I probed, I found one difference: one operation used propofol, and the other used a different anesthetic, fentanyl. My slow and sluggish recovery came after the propofol surgery.

I related this experience to the anesthesia staff at Beaumont Hospital before my latest surgery. I learned that anesthesia technology has advanced considerably and that now they never use a single sedating agent. They typically use propofol for initial relaxation because it acts quickly. Then they immediately change to fentanyl plus other sedatives, including a drug that erases short-term memory.

The rareness of death from anesthesia may be partially attributable to the screening, testing and restrictions imposed by the hospital during the weeks before surgery:

– I submitted a medical history and list of medications to the anesthesia staff.

– They responded with instructions for a number of blood tests, including blood clotting rates.

– Because I have a heart murmur, they instructed me to have my cardiologist conduct an EKG and approve me for surgery.

– The anesthesiologist and anesthesia nurse visually screen each patient for potential sedation problems. For example, a patient that appears to be overweight is likely to suffer from obstructive apnea or other breathing problems during sleep. In most cases the patient has not previously been diagnosed with apnea. Thus even without a diagnosis, the anesthesiologist must prepare for obstructive apnea by monitoring and maintaining the patient’s airway.

– The anesthesia staff instructed me to stop taking all medicines, vitamins and supplements for one to two weeks prior to surgery. The only exceptions would be those specifically authorized by my doctor and the hospital. (For example, they permitted me omeprazole to control GERD, even on the morning of my surgery.) High on the list of forbidden substances are all blood thinners, including baby aspirin.

– The staff forbade alcohol consumption for 48 hours prior to surgery. This, plus the blocking of most medicines and pills, put my body into a predictable state, helping the staff better manage my anesthesia.

– From noon the day before surgery, the instructions required me to consume no solid food and only clear liquids. This reduces the chance of vomiting during and after surgery, which could cause choking or lead to pneumonia.

– The hospital prescribed bowel cleansing, as is always done before a general anesthetic. (Relaxed muscles would otherwise lead to a mess. In addition, the surgeon needed to easily move the small intestine to one side during my surgery.)

– Both the nurse and the anesthesiologist felt for a pulse in each of my feet. They were able to determine that I have good peripheral circulation. (Poor circulation would predispose me to blood clot formation in my legs during and after surgery.)

In my case, I have a known condition of obstructive sleep apnea. An oral appliance plus a wedge bed pillow together control my condition very well. However, my surgery required me to lie flat on my back, which negated these controls. Moreover, the staff did not want my oral appliance or anything else blocking my throat during surgery.

Naturally, I wanted to know how the anesthesia staff planned to keep me breathing during the operation. They were well equipped to answer my questions:

– As soon as I was unconscious, they would insert a breathing tube to keep my airway open.

– They would provide supplemental oxygen through a nose clip, both during and after surgery.

– As soon as surgery was complete, they would remove the breathing tube and substitute two other devices: a tube in my nose to keep the airway open, and an oral appliance to depress my tongue.

– Once I came out of sedation they would offer me my apnea appliance to use if I wished.

– During surgery, they would continuously monitor breathing, blood oxygen level, blood pressure, pulse rate and muscular response in the forearm. Together, these sensors allow them to increase or decrease the amount of sedation. They also ensure that there are no obstructions to the airflow, which could lead to oxygen deprivation and brain damage.

Every so often, we read lurid and terrifying articles about people who wake up during surgery. For some reason, the anesthetic has failed, so they experience the pain of surgery but are paralyzed, unable to say, “Hey, stop!”

Naturally, I asked the anesthesia staff how they ensure that the patient is completely unconscious and not feeling any pain.

Use and Non-Use of EEG Monitoring

One might think that monitoring patient brainwaves with an EEG would give a direct measure as to whether the patient experiences pain during surgery. However, I learned Beaumont Hospital does not routinely use EEG as a sensor during anesthesia. (They may use EEG as a monitor in the case of brain or nervous system surgery.)

I found two recent articles that summarize the medical profession’s view on EEG’s applicability to anesthesia: a 2013 article from the US and a 2014 article from Finland. From these, I gathered the following:
– Small studies show that EEG monitoring is helpful to guide the depth of sedation during anesthesia. However, large-scale studies show no benefit at all.
– EEG monitoring in the operating room has become routine in Europe despite lack of convincing proof of its efficacy. It has not yet been widely adopted in the US.
– Medical researchers criticize current EEG monitoring technology for not measuring more areas of the brain. However, that would require additional electrodes.
– EEG analysis must take into account the factors that affect brainwaves besides anesthesia. These include patient medications, patient physical and mental state and type of surgery.

Other Sensors to Avoid Pain During Surgery

The Beaumont staff felt confident that the other sensor data available to them would prevent any perception (or at least, recollection) of pain during surgery:
– Beaumont monitors the patient’s blood pressure during surgery. If the patient is feeling pain the blood pressure will rise and that signals a need to increase the anesthetic dose.
– Beaumont uses sensors on the forearm to monitor muscle response. Reaction of the muscles to stimulation confirms whether the anesthetic is working effectively.
– Among the medications used in anesthesia is one that wipes out short-term memory. Thus the patient will have neither good memories nor bad memories of the surgery. (I can confirm that I have no recollection of my own surgery.)

The nurses told me that I was given intravenous Tylenol during and after surgery to control pain. They said that it is much easier to prevent pain than to stop it after it takes hold. Therefore, they consider it prudent to provide pain medication even when the patient is not yet experiencing pain. That sounded reasonable to me.

My surgeon provided me with a prescription for hydrocodone. He directed me to take it if I experienced post-surgical pain for which Tylenol was not sufficient. I prefer to avoid opioids so I fervently hoped not to use the hydrocodone. As it turned out, I took neither pain medication.

This concludes Part 2 of this five-part blog on hospital surgery. Part 3 describes what happened when I woke up after surgery.

Image Credit: Doctors and Surgery, from j4p4n on open clipart.org