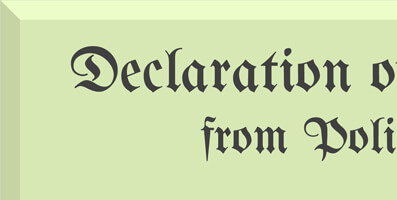 Note Added May 2018: Political rants inspired this post in June 2015. This seems a good time to re-publish it. The midterm election season is warming up, and emotional, insulting speech is already circulating. Once again, it’s time for each of us to calm the fires of passion that needlessly add to political polarization.

Science Fact. Political rants are one of the downsides of the enhanced communications that the Internet, e-mail and social media make possible. We scan the news, the jokes, the family photos and the joys and sorrows of our friends and they help us be happy. However, we unavoidably encounter spam, phishing e-mails and political rants.

Here’s one result from the research. If you have friends who span the political spectrum, two things will happen:
– Friends with whom you don’t agree on some political issue will sometimes come out with stuff that to you sounds completely irrational.
– And conversely, some of the things you say will sound just as off-the-wall to them.

I’m sure that your friends are not stupid people. However, they have allied with a group. By analogy, they are members of a clan. They have the obligation  – and are proud – to wear the correct tartan. This effect helps explain why people whom you love and respect will sometimes forward or even write stuff that you think unworthy of them.

Scientists are not immune to this group-driven behavior – they too behave irrationally with respect to politicized issues. In fact, scientists are bigger chumps than non-scientists! The research referenced above shows that numerically literate people use their analytical skills in a biased way, to prove what they already believe. Thus their ability to think logically betrays them, leading them astray.

Science Speculation. No doubt we each have our favorite peeves that interfere when we want to be happy. Two of mine are emotionally charged wordsand personal insults. We find them stuffed like walnuts in a fruitcake, into what pretends to be a thoughtful discussion of an important national or international issue. I will not insult your intelligence or stir up your anxiety by giving examples of emotional “trigger words.” I’m sure you can think of those phrases that cause you to breathe more heavily as your body prepares for battle. Those emotional and insulting additions activate my Rant Detector. As a result, I no longer want to read the article, whether I agree with its conclusions or not.

What do I mean by a political rant? The dictionary pegs “rant” as talking in a noisy or excited way or scolding vehemently, in a bombastic (pompous) manner. And “political” of course references the actions and policies of government. Although it often features altruism, politics is at heart a struggle for power over others. However, a political rant is an aggressive assertion of superiority that often includes demeaning one’s opponents.

However, emotions are not binary – they can occur at any level of intensity. Political rants raise the stakes, inflame passions and influence behavior. Past rants may have contributed to the polarization and deadlock in U.S. politics today.

How can the fires be turned down? Shall we turn to folk wisdom?

Or how about the Bible?

“A gentle answer turns away wrath, But a harsh word stirs up anger.”

I see no evidence that either music or wimpy responses calm political passions. However, it’s certainly true that harsh words intensify them. Instead, I vote with La Fontaine:

So perhaps the cure for dysfunctional polarization is the passage of time. Meanwhile, I say that we as individuals should let the fire burn itself out, and try not to add more fuel. That assertion is the heart of what I am about to propose.

The current election season is an appropriate time to present my personal Declaration of Independence from Political Rants:

Declaration of Independence
from Political Rants

There’s no particular reason that you, dear reader, would be irritated by exactly the same things that bother me. But just in case you find resonance in these words, here they are as a JPG that you are welcome to download and share as you will: 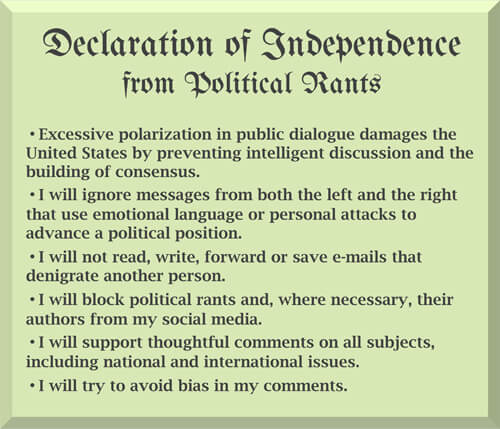 I wish you an election season free of political rants, and rich with thoughtful discourse!