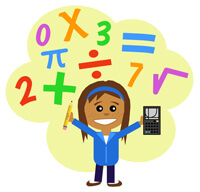 Part 1 of this post described the career opportunities and general technical literacy that make STEM education an important part of every curriculum. This Part 2 describes research that shows the limitations of STEM education.

Scientific consensus never reaches a final conclusion because science is by nature subject to change as new data appears. Nevertheless at any given time science has a general consensus on a great many issues. So why is the consensus of scientists, on a subject they spend their entire lives studying, so unconvincing to the general public?

Examples where politics defeats science in shaping public opinion are dramatically shown by a brilliant collection of studies. On a number of these, the lead author is Prof. Dan Kahan, who is on the faculty at Yale Law School and also works with the Harvard Safra Center for Ethics. Kahan overflows over with good ideas, and this post draws heavily from his published articles.

An example from a 2013 study will give the general idea. Many people believe that if Americans had a better grounding in science and math they would embrace the scientific consensus rather than take positions diametrically opposed to the known facts. The researchers decided to test whether this is true.

The scientists hired a national polling firm to administer three tests to 1,111 U.S. adults whose gender, political persuasion, geographical distribution and race approximately match the U.S. population. Here are the first two tests:
1. One test measures political orientation, such as right versus left, or conservative versus liberal.
2. Another test measures “Numeracy” (numerical skill): the ability to look at scientific results on a wide range of world problems and draw an accurate conclusion from them.

The left-leaning group and the right-leaning group each included people with a full range of Numeracy abilities ranging from total incompetence to very high analytical skill.

A Test That Shows No Bias

Each person was then given one more test, designed to tell whether his or her personal politics got in the way of coming up with the correct answer. That is, did politics defeat science inside an individual’s thinking? This is where the experimental design gets quite clever.

Consider the following test: researchers tell the “subject” (the person being tested) about a new skin cream and shows the following results of tests on the cream:

(This figure and the following ones are adapted from Kahan et al, Motivated Numeracy and Enlightened Self-Government)

The data is totally fictitious, invented to make it difficult to come up with the right answer. When most people quickly glance at the table, they tend to either look at the top two numbers, or the two numbers on the left. The top two numbers show that more people got worse than better; the left-hand numbers show that for people whose rash got worse, most of them were using the skin cream. Both of these quick-and-dirty ways conclude that the skin cream makes the rash worse.

However, notice what happens when we calculate the percentages going across:

Among the people using the skin cream, 34% got better; and among people not using it, only 20% got better. So in fact the skin cream helps, but you can’t come to that (correct) conclusion without thinking about it and then dividing some numbers.

Researchers gave a random selection of one-fourth of the subjects the test above. They gave another random one-fourth the same problem but the following opposite data: 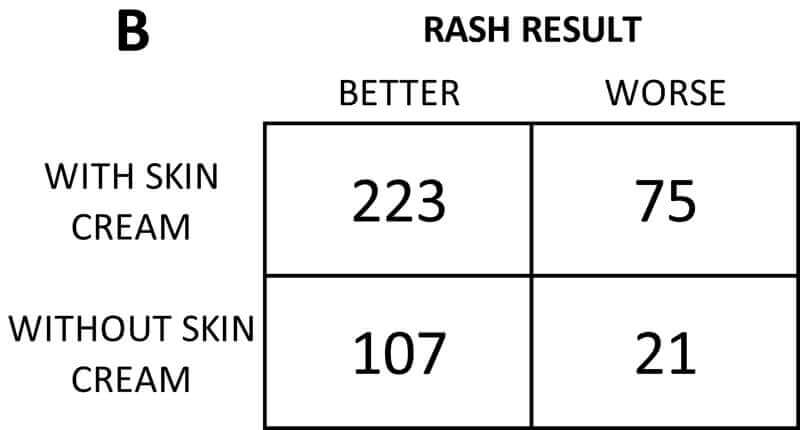 The column headings have been reversed! So naturally the correct answer is exactly opposite.

A Test That Reveals Bias

You may be saying, that’s only half the test subjects, and that’s also not a very interesting test. OK, but here’s the test that was given to another one-quarter of the group: they were told that a city was trying to decide whether to pass a gun control ordinance, so they were looking at data from other cities who either did or did not pass a similar ordinance. And here was the data the city was studying:

You’ll notice a certain similarity between this data and the skin test data: as pointed out, both are fictitious.

The remaining one-fourth of the test subjects received the same question, with the opposite set of data:

Thus a full spectrum of Americans of every political persuasion and numerical literacy were asked both “innocent” questions and questions that carry with them a lot of political baggage.

What the Data Showed

Summary of the Results

Here’s how the researchers summarized what they found:

…more Numerate subjects would use their quantitative-reasoning capacity selectively to conform their interpretation of the data to the result most consistent with their political outlooks.

This is quite a remarkable result. It refutes the notion that a better understanding of science would cause Americans to adopt more rational views on sensitive issues. Instead, it shows that politics defeats science for everyone.

Differently stated, political issues, those in which we adopt opinions similar to the people we respect and care about, overwhelm any objective consideration of the facts. It is simply not possible to take a scientific issue that has become emotional and get anyone – on the left OR on the right – to consider it dispassionately. We human beings are simply not wired that way!

The full article describing the work summarized above contains a lot of statistical analysis but it also has much interesting discussion for the non-specialist. Almost as fascinating are the follow-up articles in which the work is interpreted, re-interpreted and re-re-interpreted by people whose own political view colors their understanding of the research. In other words, even the discussion of research about bias is subject to bias in interpretation. Everyone can find something with which to be happy!

OK, so politics defeats science in many many instances. Does that mean that science is useless in addressing the major problems that the world faces? Let’s define some subsets of problems to see how we can overcome this dilemma in public policy. Differently stated, we’ll nibble away at this question from several sides:

As the researchers point out, very few research questions ever become a symbol of group identity. They give examples of areas where there are disagreements and a need for scientific studies, but only a tiny minority of people feel passionately about them: antibiotics to treat infections; health risk of cell phone radiation; government’s role in fire and police protection; the use of government-issued currency rather than barter and precious metals. So science can tackle and overcome many human problems without being totally stymied by politics.

Some issues need re-framing to permit rational discussion. For example, the phrase “rationing health care” provokes an emotional and mostly negative response. However, considering “how to allocate doctors and hospital beds to best save lives” is easier to consider for many people. Because of re-framing, the focus has become positive (“save lives”) rather than negative (“take money away from something praiseworthy, perhaps to spend it on something I oppose”).

Another Kahan study finds value in what he calls “two-channel” communication and what I would call “linkage” or “win-win.” The researchers chose a controversial scientific question whose dire evidence tends to persuade Democrats (climate change). They paired it with a discussion of geoengineering, which addresses climate change not by suggesting government limitations on emissions, but by proposing ways to capture carbon on a large scale. The presentation of a solution that requires independence and entrepreneurship, values that appeal to Republicans, helped neutralize the polarizing nature of the climate question so that both left- and right-leaning subjects could consider the science more objectively. Thus by making sure that the discussion affirmed both conservative and liberal values, people became less polarized and were better able to consider the scientific facts on both sides of the question. Both conservatives and liberals adjusted their positions, moving a bit toward the center.

Scientists should plan ahead when they address issues that potentially affect large numbers of people and strong economic interests. If a problem is likely to become a political rallying point, soon scientific results will become ignored or mis-interpreted; in fact, the scientists themselves will become biased. So people who want to tackle social problems should enlist both conservatives and liberals in its solution, re-affirming both sets of values as they proceed, to try to keep the issue from becoming a political football.

Most importantly, scientists need to be humble about what they bring to the party. Facts, analysis and the confirmation of hypotheses may be totally convincing to scientists. However, what scientists believe amounts to nothing very special in the eyes of the public. A scientific conclusion is simply one more piece of information to consider – and not the most important one, either! – when a person develops a personal opinion on a subject of broad social concern.

Is “politics defeats science” always true when confronting controversial subjects? Almost everyone occasionally cherry-picks facts to support his personal views – have you ever noticed yourself doing that?