Political Loyalty is today’s topic. It’s the third-in-line conclusion to the preceding blogs on Political Apathy and Political Morality.

Our previous blog treated Moral Foundations Theory (MFT), which focuses on personal values. This one takes an opposite view: looking at political affiliations and how they shape our morality. And we’ll look at citizen assemblies, which cut through all the theories with practical ways to bring people together.

Here are the main sections of today’s blog:

Therefore, What Causes What?

A group of researchers including Profs Peter Hatemi of Penn State and Kevin Smith of U. Nebraska-Lincoln called MFT into question in their recent work (2016, 2019) They found that peoples’ moral codes did not predict their political preference in any lasting way. Rather, people seem to choose their political party first and then adopt moral positions that fit what that party is advocating. Thus politics explains (that is, predicts) morals rather than the other way around.

This is quite a startling idea to those of us who would like to believe that moral principles are something deep and lasting. However, the researchers quote several different studies that all seem to point in the same direction: an American national election study from 2008; surveys of hundreds of Australians between 2007 and 2011; and a survey of hundreds of Americans using the MTurk platform.

– Examples of the Dominance of Partisanship Over Morality

Hatemi offers two examples that seem consistent with these findings:

As another example, journalist Olga Khazan points out that both liberals and conservatives sometimes quote the same moral principles to support opposing positions, such as using the value of life to argue support or opposition to Obamacare or the death penalty.

She goes on to quote Kevin Smith as saying, “People tend to forgive things that are done by politicians on their own sides that they would claim is morally over the line on the other side.” 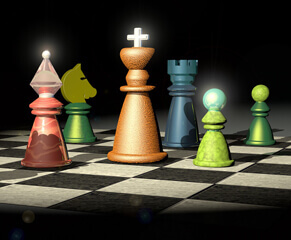 A recent article in Science on political sectarianism offers another example showing how political affiliation can drive moral positions. Researchers measured the moral positions of a group of Republicans, then showed them a video clip of President Trump voicing a liberal policy. They then measured the group’s attitudes again and found that they had shifted in the liberal direction. The scientists believe that Democrats would be subject to the same kind of influence from one of their leaders.

Does this mean that political loyalty wins the jackpot and it’s futile to look for rapprochement with our political adversaries? Perhaps not, because intense partisanship rests on a foundation of falsehood.

–  People See Other People As Stereotypes

Lest you say, oh, perhaps both those statements are true!, let me quote some data that quantifies our false perceptions about others. An article by Ahler and Sood in 2017 summarized a series of studies.

This study suggests that we grossly overestimate how different from us our political opponents actually are. And we also overestimate the extent to which our own party matches stereotypes.

What are the implications of this state of affairs?

I’ll admit that the last of these bullets reflects some wishful thinking!

Therefore, What Causes What?

Social scientists do not agree on when and where either theory applies. Therefore, I have purposely given you both, even though they suggest opposite directions for cause and effect.

How do the foundation morals fit in? They evolved to help people live together, thus each of those values has human validity. However, they do not form a moral code. They cannot, because sometimes they directly oppose one another (for example, care for an individual versus group authority when discussing capital punishment or abortion). Rather, the foundation morals form a menu from which we choose a balance that suits us.

As we go through life we have experiences that may change our chosen moral positions, or shift their relative emphasis. (As Pong sings in Turandot, “my heart has wakened inside me.”)

Nothing should be set in stone. We can allow our views to evolve while still honoring our core values. Faith, or an authority figure, may try to prescribe a full set of rules. However, ethical dilemmas will always arise that were unforeseen, and require judgment and compassion to resolve.

Here’s a possible way that the opposing theories fit together:

Therefore, I posit that both theories are right, but they deal with different stages of individual choice. And as we have seen, each theory offers approaches to help us reach across the partisan loyalty divide.

In this sequence of blogs, we have given a lot of attention to moral values and how they relate to political loyalty. And social scientists will continue to study how we tick politically.

However, fortunately the world does not have to wait for scientists to understand “everything,” or even “almost everything.” Many countries are pressing forward with a new and practical approach to develop public policy. It creates consensus plans in controversial areas where partisan politics has failed to assemble bold and coherent strategies. These controversial areas include issues like climate change, air quality and environmental protection, where powerful economic forces jockey for advantage.

This new paradigm for policy development is the citizen assembly, also known as a mini-public. The discussion below summarizes a long article in Science that reviews the current status of these assemblies.

– How to Create and Empower a Citizen Assembly

To illustrate how a citizen assembly works, let’s consider the UK Climate Assembly.

In mid-2019, the United Kingdom set a target of net zero carbon emissions by 2050, in line with its commitments to the 2016 Paris agreement. They wanted to create climate policies with the full participation of the public so that the public would support them. So several members of Parliament commissioned a citizen assembly to consider how to meet the emissions target.

UK ran a random lottery to select 30,000 potential participants and invited them to participate in the assembly. 1,748 people responded, and UK narrowed the choice to 110 people who matched UK’s overall population in gender, age, ethnicity, education, geography and degree of concern about the climate. One reason that UK used this two-stage process was to limit self-selection. That would be undesirable because you don’t want an assembly dominated by people with a strong a priori opinion.

– How the UK Climate Assembly Worked

Parliament hired a private company to run the assembly and gave them funds to reimburse each participant’s costs, plus a stipend of £150 for each weekend meeting. The meetings were held in Birmingham, a central location, for the convenience of most assembly members.

Over the course of four weekends, the assembly met to hear presentations by experts of all kinds: not only climate scientists, but also representatives of industry groups and nonprofits like Greenpeace. Each day alternated between speaker presentations and small group discussions. Facilitators guided the small groups to keep anyone from dominating, and to ensure that all members took part. (94% of the participants later said that they felt they had ample opportunity to express their views, and that their opinions were respected.)

The UK climate assembly produced a final report in September. It recommends that the policy adopted must have two-party leadership and provide fair protection to major stakeholder groups. It advocates restoring public ownership to public transit, introducing progressive air travel taxes and adding labeling to food that indicates its carbon footprint. The Parliamentary committees that established the assembly will use the report to develop recommendations and legislation.

– Are the Citizen Assembly Recommendations Implemented?

How much of the UK Climate Assembly’s report will make it into law is yet to be seen. However, a study of 55 citizen assemblies by a Belgian researcher showed that 75% of the time, authorities implemented more than half of the citizens’ suggestions. Thus these mini-publics seem to be effective, even though they often address very emotional issues.

There are voices calling for caution, of course. Among the concerns are these:

Certainly, there is no “magic bullet” that overcomes polarization on every front. However, the citizen assembly offers a valuable practical tool to sidestep the limitations of political loyalty, to bridge partisan positions on difficult issues. The Science article quotes Alice Siu, a Stanford political scientist, as saying:

In an age of polarization, a willingness to respectfully hear other views, and the reasons people hold them, changes the hostile dynamic of politics entirely…Something magical happens.

As we come to the end of this three-part blog, it’s worth summing up what we have learned:

The Moral Foundations values grew up with humanity and are inherent to our makeup. They show that when we try to reach across the issues that divide us, we are acting in harmony with human nature. “Let there be peace on earth, and let it begin with me” is not just the lead-in to a song, it’s a moral statement about our duty to one another.

What can we as citizens do to bridge the gap that is magnified by political loyalty?

There’s room for action by everyone in our society. Politicians, company leaders, nonprofit executives and people of good will all play a role. Each of us has opportunities: to refuse to forward or “like” hateful material; to model rational discussion of controversial issues; and to show empathy for other people’s values.

Political apathy, political morality, political loyalty and citizen assemblies: they are all features of partisanship in the US and in the world today. The tools of science bring understanding, and the experiments in citizen assemblies bring experience. Together they can help us reach across the partisan chasm. And we need to do this! We need unity of purpose to confront the challenges that the future doubtless has in store for us all.

Image Credits:
– Adaptations from Chess and King by PIRO4D on pixabay.com
– Table of sterotypes prepared by Art Chester using data from Ahler and Sood
– Hands by Jasmine Carter on pexels.com