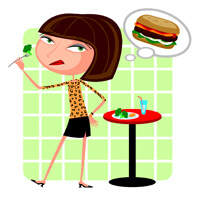 Science Fact:  Frankenburger — that’s meat grown in a test tube — has given late night comedians lots of joke material. And Sergey Brin, co-founder of Google, has bankrolled research by scientist Mark Post at Maastricht University in the Netherlands. The goal? To feed steaks and chops and fried chicken to a hungry world. And to avoid the tremendous inefficiency of farming.

Taste testers got to eat a test tube hamburger this month. Surprise: they were less than enthusiastic. But hey, this is new technology, give the researchers a chance.

The scientists start the process with stem cells from a cow.  Then they culture them in the lab using a scarce and rather alarming growth medium — fetal cow’s blood. (However, they hope to use algae as feed in the future.)

Then comes an amazing step in the process. The researchers “exercise” the strands of almost-meat. Electrical stimulation builds up the muscle.

Last of all, they blend the meat with lab-grown animal fat and beet juice for color, then shape the mix into a hamburger patty. No wonder the first burger cost a third of a million dollars. And tasted “almost meat-like, like an animal protein cake”. Yuck. As a result, the whole idea “intrigues and repels”.

Science Speculation:  Amazingly, growing meat in a test tube dates back to 1912. Alexis Carrel, a Nobel Laureate physician, started growing chicken tissue. And he may or may not have sustained the culture for twenty years.

Fast-forward to the forties and fifties, a booming age of science fiction. And there you find spaceships zooming across the cosmos. The space travelers had a continual supply of healthy food. From gigantic vats of meat bearing affectionate names such as Chicken Little and Hamlet! (See Footnote below.)

Some question the ethics of eating test tube meat. (Does a vat of animal flesh have rights? Feelings?) Also, some people quote religious prohibitions. (Is it kosher? Halal?). But leaving these considerations aside, the economics stink.

However, other researchers are using a similar technology to grow organs from a patient’s own cells. They hope someday to replace a failing heart or liver with an organ created from your own body.

So far, there’s some success with bladders and windpipes. They can also manufacture unstructured tissues such as cartilage, bone, and pancreas and liver cells. Cross-coupling between organ cloning and test tube meat may advance both technologies in surprising and creepy ways.

Five years have elapsed since I published this blog. The news feeds have been quiet, but Science Magazine has just published an update. The title of their article is: U.S. lawmakers float plan to regulate cultured meat.

Science may not show you their article unless you are a subscriber. Therefore, I will summarize some relevant points here.

It turns out that there is a new field, known as “cellular agriculture.” These agriculturists are busy developing “cultured meat,” today’s name for test-tube meat. And although Chicken Little has not yet arrived at groceries and restaurants, the battle is mounting over its regulation.

The U.S. is considering authorizing the Department of Agriculture to regulate cultured meat, since they oversee conventionally raised meat. Consequently, one can see potential problems with having USDA in the driver’s seat:

In the meanwhile, the European Union has stepped forward with its own regulations. They designated cultured meat as a “novel food.” It will be legal if regulators determine that it is:

Therefore, the regulators are already engaged. Can new products be far behind?

Would you consider a Frankenburger made with test tube meat to be healthy food? Would you eat it? Do you think the public would come to accept it?

Footnote:  I was convinced that Chicken Little, Hamlet and perhaps Ferdinand (a vat of beef) all came from a book by Robert A. Heinlein. However, I can’t find it. Bill Christensen writes the Technovelgy website. He credits Chicken Little — in the sense of vat-grown meat — to Frederick Pohl and C. M. Kornbluth in their 1952 book The Space Merchants. Perhaps Heinlein grabbed the idea and extended it, but I’m unable to find a reference to it. Any science fiction fans out there with a good memory?