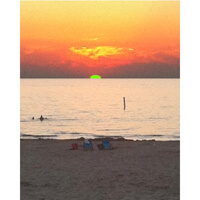 Science Fact:  Sunsets are always special, but a sunset with a Green Flash is a rare and memorable event.  The Green Flash is common enough to be visible to anyone, but rare enough to be exciting.  Moreover, it’s a nice example of the laws of physics made visible in everyday life.

What exactly do we mean by a Green Flash?  Well, it’s not usually a flash.  What it is, is a spot or streak of green, or sometimes blue, light on or near the sun, where you would expect only yellow or yellow-orange.  The simplest and most reliably seen Green Flash is where the sun changes color just before disappearing below the horizon.

How do you observe such a phenomenon?  The references offer much advice, but here’s my own:
– If you can manage to be by the ocean or a large lake, so the sun sets into the water, that’s ideal. However, they say that what’s important is for your eye to be higher than the horizon. On rare occasions I have seen a green flash from a sunset over land.
– The air should be clear — no clouds, no haze;  those will absorb or scatter the green light you are trying to see.  For this reason, you can see green flashes quite regularly in the Hawaiian Islands but more rarely on the California coast.
– There needs to be a thermal gradient in the air along your line of sight. For example, when you’re looking across water, the water is often cooler than the air above it. This allows the air to act like a prism, spreading out the colors of the light so the green and blue will be the colors last seen as the sun goes down.
– Don’t stare at the sun, not only to avoid eye damage but also to avoid a green after-image which will interfere with your ability to see the green flash.  Keep looking away until the very last moment when the remaining spot of sun is so small that it won’t blind you.

One of the nice things about the green flash is that it’s unpredictable, you can never be sure whether it will be visible or not because it depends on so many factors outside your control. I once saw a green flash from the deck of a cruise ship in the western Mediterranean; a ship’s officer who was standing nearby and also saw it, said that it is a very unusual sighting in that part of the world.

Now is the time for a confession:  The image above is a fake, concocted to show you an extreme idea of what you are looking for, and to introduce the idea of this post.  However, here is an actual photo of a green flash sequence, taken March 2008 from an outdoor table at the Sands of Kahana restaurant in Maui: 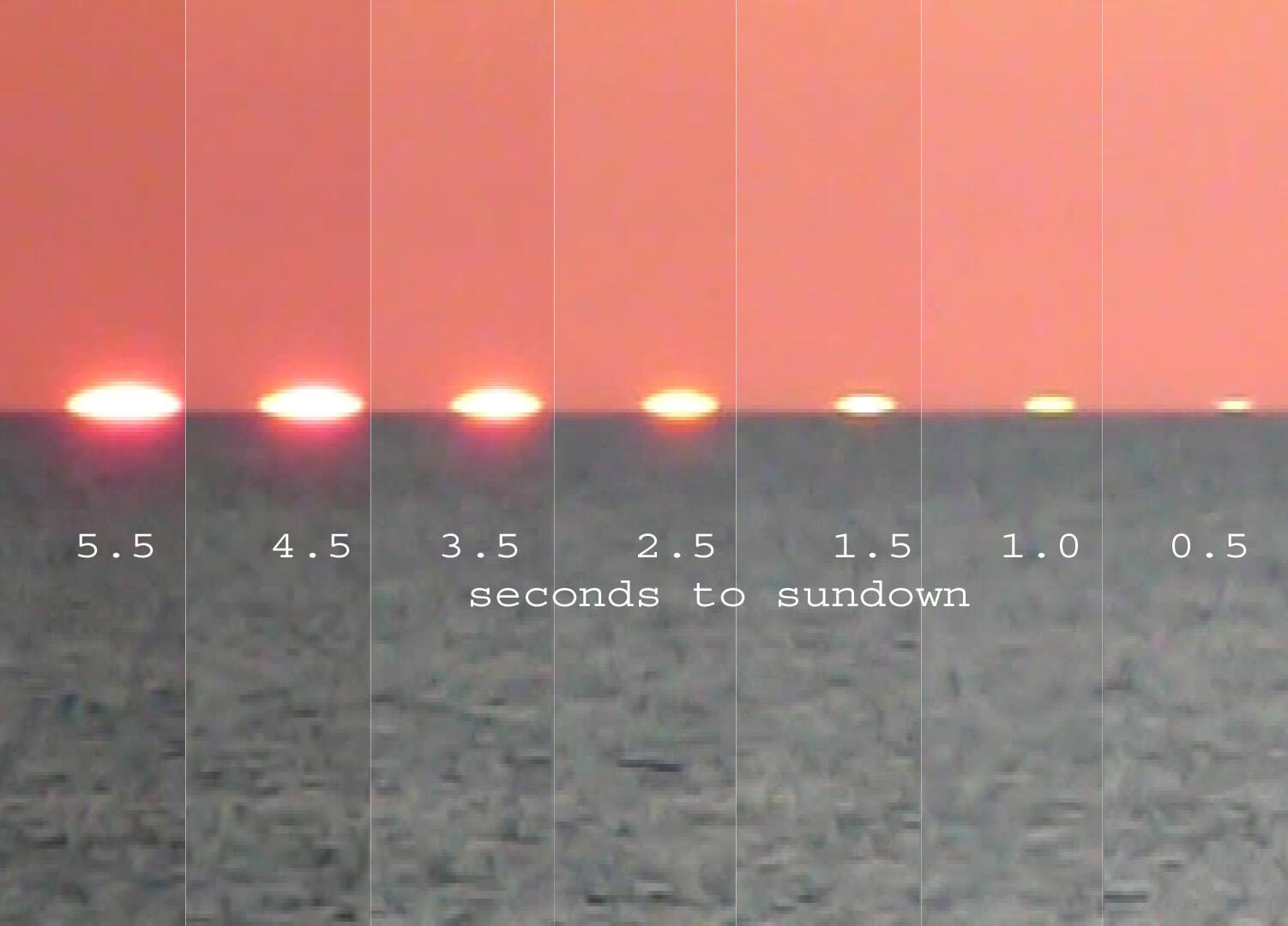 I used my camera to take a video of the sunset, extracted images at the times indicated before disappearance of the sunset image, and assembled them in PowerPoint.  I have not retouched the colors.  If you look carefully, you’ll see a slight change in color of the sun’s image moving from left to right.  You can see a similar sequence taken by Florian Schaaf at http://www.atoptics.co.uk/atoptics/gf2.htm.

This photo illustrates some of the difficulties with recording the phenomenon:
1.  The CCD array in the camera has trouble showing much color change; on this occasion, the final spot of color appeared to be apple-green, but the camera barely sees a shift in color.
2.  The phenomenon lasts less than a second, so it’s much easier to catch with video than with a sequence of still shots.
3.  In this photo, the camera’s autoexposure is adjusting the exposure as the total light changes, which in turn changes the apparent background colors
4.  CCD arrays have a narrower dynamic range than conventional film, so a truer color comparison could be made using film.

Note added February 2, 2021: Joe Fiano, a friend of my friend Charles South, has provided a nice green flash video taken from a hilltop in Ventura, California. The sun is setting over Santa Rosa island, fifty miles away in the Pacific Ocean. Joe used a Canon PowerShot SX540 camera with 50x optical zoom and image stabilization. Here’s his 8 second clip:

Science Speculation:  If it is true that everything in science can be explained more simply, it’s also true that everything in science can be unnecessarily complicated by people who start examining the details.  If you make the barest search on “green flash”, you’ll find people describing a huge variety of green flashes, each with its own arcane name.   What they have in common is a green, or sometimes blue, spot or streak of light on or near the sun, where you would expect only yellow or yellow-orange.  I’ve limited my list of sources to just a few — there are many more.

The kind of green flash we have been discussing is the “inferior-mirage” or “I-Mir” flash, also called the “last glimpse” or “last vestige” flash, in which the last bit of the sun that is seen appears to change color.  This is the type of green flash most frequently and reliably seen, and the one most easily explained using physical optics.  Some of the more exotic green flashes are visible only as a spot near the disc of the sun, and they are hard to see due to distraction and glare from the sun.  The last glimpse flash is best for casual observation because it encompasses all of the sun that is visible, and it occurs when nothing else is going on, just before the sun vanishes entirely.

Have you seen a green flash?  Where was it, at what time of year?


A number of photos: https://earthsky.org/earth/can-i-see-a-green-flash