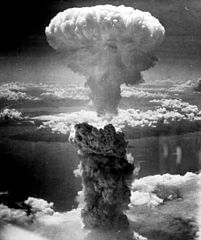 Science Fact: Human Survival sounds like a pretty weighty topic, even for Scientific American, but there it is, all 1800 words of it

Fending off asteroids and capping volcanoes is too difficult. Therefore the article focuses more on why we, as human beings, can’t look far ahead, can’t deal with problems. The author Lawrence Rifkin discusses psychological, ideological, and then evolutionary reasons like the following:

… those better able to dodge the lion were more likely to pass on their genes, while those focused on…gamma-ray bursts from outer space might have represented good news for the continuation of the lion’s genetic line, but not their own.

Science Speculation:  You’d think that contemplating destruction of our species would cause anyone to be speechless. Nevertheless, the article goes on to list fourteen things we poor humans could or should be doing. Some of the items are straightforward: seed banks, disease control. Some are far out: deflect asteroids, colonise other planets. But the author completely lost me with the following suggestion:

Maintain a well-chosen small number of people in a deep, well protected refugee sanctuary, with adequate supplies to last for years to buffer against human extinction from a range of causes. Genetically diverse international volunteers who live in such a bunker could be rotated, say, every two months. A similar Noah’s ark refuge could be established on a space station.

All I could think of was Dr. Strangelove, the sixties film. In it, Peter Sellars simultaneously plays mad scientist, President, and hapless British junior officer. Dr. Strangelove advocates an escape plan just like that in the article (however, more luridly and lecherously). And General Turgidson worries about a “mineshaft gap” because the Soviets will do the same.

I have high respect for popular culture. It enriches and enlivens our world. And in cases like this does even more. It gives a flash of insight allowing us to immediately recognize the ridiculous, even when it appears in scientific jumbotalk!

Is human survival a worthwhile study for human beings? Or it is too big for us — more appropriate for God, Nature, Fate, predestination, the Stars…?