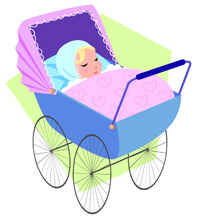 Science Fact:  Let’s teach our kids early – maybe when they’re one year old – or even prenatal learning! There’s a new study that really makes us jump up. Let’s talk about what’s new, and how it fits into what we know.

It’s known that babies recognize music that they heard in the womb — such as the theme song of a favorite TV show. Newborns prefer the sound of their mother’s voice to that of a female stranger. Newborns cry with sounds that fit the language they heard prenatally: when a French baby cries, the sound ends on a rising pitch, and a German baby cries with a falling pitch; these are believed to mirror the patterns of the language the baby heard in utero.

So, what’s the problem? Just that to gain even this much knowledge, scientists had to measure infant behavior, and babies are so variable that you can never be certain what you are measuring. That’s where this new work fits in.

Researchers at the University of Helsinki, Finland wanted to see whether the fetal brain starts developing language skills, and that these skills are measureable in the brain activity of the newborn. So they recruited expectant women as volunteers, randomly assigning them to an experimental group and a control group. The experimental mothers-to-be played recordings that included many repetitions of an invented word, “tatata”, which has no meaning in Finnish. (It seems to be a word in Swahili, but the researchers didn’t repeat their study in Africa.)

Then the payoff: after birth, the neuroscientists measured the brain waves of the newborns. The brain activity showed that the experimental babies recognized the “tatata” word and its variations, whereas the control group didn’t respond to it. This careful study by a respected research group is unusually convincing to scientists that “language learning begins in the womb”.

Unfortunately, pre-pre-pre-school education has had a rocky history. In the mid-nineties, the companies Baby Einstein and Brainy Baby implied that you could give your toddler a big head start in life with videos and games. The former company was sold to Disney, and when researchers concluded in 2007 that Baby Einstein was worthless or even harmless, lawsuits followed. Subsequent studies confirmed that showing your babies DVDs has no measureable value to them. (LA Times, Time, UCR press, original study). Brainy Baby gets similar criticism in the “most useful” Amazon reviews.

Jump forward to 2011 and we have Annie Murphy Paul and her book Origins on prenatal learning. She made a big splash at TEDGlobal 2011 and many people love her book, but three of the four “most useful” Amazon reviews slam, not the science, but the book she wrote:  “Another White Privileged Yuppie Mother Writes Book on her Fetus”, “Great as a memoir, terrible as a pop science book”, “Frustrating…” (I took the liberty of correcting some spelling.)

Science Speculation:  I wish to state that I have raised no babies, so I have neither personal experience nor personal bias in this area of science!

So here we have toddler learning, reaching more and more firmly into prenatal learning. What’s next? Prep school for sperm and eggs? No, let’s not go there.

An excellent short article called Prenatal Memory and Learning, which appears to date from 2009, gives a good summary. The short version: in many ways, the womb is a classroom for the fetus.

But what parents want to know is, what should I do, to help my baby? And unfortunately, high-tech prenatal learning is a risky path to follow.  The Science Magazine article is accompanied by many comments, in which abortion opponents and supporters have hijacked the discussion. But buried among the comments is a great one by Richard Kinseher, which includes this warning: “Too much stimuli in fetal age are harmful for the fetus/baby. We know this from premature infants….biological development/maturity might be disturbed by intense…stimuli.”  And when I looked into it, it’s true that the preferred care for preemies includes soft sound and dim lighting, cycled to follow the natural day. Premature infants have not fully developed in many ways, including the brain and nervous system, and what’s good for preemies is likely good for fetuses of the same gestational age who just haven’t happened to be born yet.

In other words, take it easy!  Not too much fetal stimulation!

In fact, when you look at the many studies of fetal learning and premature care, you conclude that human touch and attention by the parents, especially the mother, are far better than any video, game, or gimmick. Hands-on parental love is what best helps early development. Talk to your unborn baby, sing to her, give her great attention — but save the technology until the kid has her own iPhone!

Some parents are convinced of the value of prenatal learning and baby videos. What do you think, and what’s your experience?