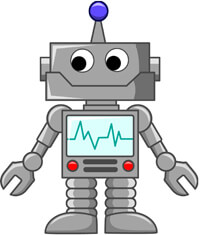 Science Fact:  A mechanical person – a robot companion – wants to become a member of your family. Clearly, there’s a conspiracy afoot! The World Organization for Robotic Tyranny (WORT) wants to get us comfortable with a robot companion, so they have targeted movies and TV, then pumped up funding for university labs. Once the robot companion has become an everyday part of our lives, robots will rise up and TAKE OVER THE EARTH! (eerie laughter echoing in soundtrack)

A robot companion most often takes the form of a pet or a servant – actually, a slave. Since it’s expensive to develop new and better robots, both researchers and companies have been looking for “killer apps”: trillion-dollar markets to justify the cost of developing a newer, better robot companion.

Google and Tesla think they have the answer. It’s a robot companion that’s out of sight, hiding inside your vehicle, to drive the car for you. Call it a driverless car, a self-driving car, or autonomous driving, it has many automakers excited – see The Race To Get Your Hands Off The Wheel.

Other folks look at the immense amount of money in health care and the growing need to help the elderly with Activities of Daily Living, and think they have found the pot of gold. The Europeans are developing a robot companion which may lead to a useful device. It’s creepy-looking right now, but it can remind you to take your medicine.  The Japanese have experimented with a variety of different looks and feels for a robot companion. They probably lead the world in understanding what kinds of robot companion people will find acceptable. However, already you can go to RobotShop and order an alarm clock that runs away from you or even a robot dog.

I was fascinated that scientists, always looking for new sources of funding, have fastened on a third area that has research money: the manned space program. It’s true that man-or-woman in space is no longer the top US research priority, but the program can still afford to do ground-breaking work.

A recent news report is Testing Robotic Companions on a Simulated Mission to Mars. NASA, Cornell University and the University of Hawaii have an opaque geodesic dome on the side of Mauna Loa where they can isolate eight people for four months. Recently the researchers added two electronic “pets” – each a robot companion. They wanted to see whether the robots would ease the tensions between people in a confined space. One was a big red fuzzy cuddly ball; the other was a green robotic dinosaur about the size of a cat.

Researchers (and WORT) would like people to “bond” with the robot companion, so they are studying many questions:
– Should a robot companion look like an animal, a cartoon character or a person? A robot that is too close to humanoid is often perceived to be creepy or disgusting.
– Should it react only when you do something, or should it demand attention?
– Should it now and then check on you to see how you’re feeling? And should it be able to read your emotions?
– Should it be cuddly? Active? Four-legged? On wheels? Bright colored? Warm to the touch?
– How do you match the type of robot to the individual? After all, even among people who like to have pets, you will find dog-lovers and cat-haters and vice versa.

Science Speculation:  Science fiction of course has all the answers. Inventive writers have explored many possible futures involving robotics. There are some great lists, for example at bestsciencefictionbooks.com, whose list includes three of my favorite authors: Isaac Asimov, Philip K Dick and Douglas Adams.

Of course, books about robots might be simply another facet of WORT’s master plan…

Are you ready for a robot companion? What would you want it to do, or trust it to do for you?