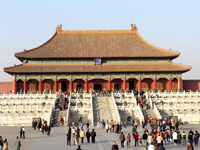 The rulers of China first built The Forbidden City during the Ming Dynasty, during the years 1406 to 1420 in Western reckoning. It was the Chinese imperial palace for nearly 500 years, through the Ming and Qing Dynasties.  Now a World Heritage Site, it is truly an impressive achievement, encompassing 980 buildings occupying 180 acres.

The scope of the Forbidden City is overwhelming. That tends to distract visitors from considering some basic engineering questions. Consider the Large Stone Carving, a sloped carved stone in the center of the photo of the Hall of Supreme Harmony at the beginning of this post. Stonemasons re-carved that stone in 1761 and it now weighs a “mere” 200 tons.  However, when first installed it weighed an estimated 300 tons. Workers had to bring it 43 miles overland from the Dashiwo quarry in Fangshan.

Pause for a moment to consider just how much weight that is. The highest Gross Vehicle Weight Rating in the U.S. is 33,000 pounds, or 16.5 tons. So 300 tons is well above what you will usually see driving down the road.  It’s more like the weight of a medium-sized house. And yes, it’s possible to conduct a “whole move” of things that heavy. However, it’s not a walk in the park. Today, you would probably transport such a piece of stone, assuming you could pick it up and load it, on a specially-equipped high-load railroad car. The point is, you can’t just get a bunch of people together and muscle it.

Wheeled vehicles were used in China long before the Ming Dynasty – since 1200 BC, perhaps 2000 BC. For that reason, historians have assumed that the Chinese built a really big wheeled cart to move stones from the quarry using mule power.

Recent scholarship, however, has concluded that the largest stones, those weighing 100 tons and more, were too heavy for the largest carts available at the time. The heavy concentration of weight risked breaking wheels and axles. When that happened a valuable stone could easily suffer damage.

Prof. Jiang Li and her colleagues in Beijing and at Princeton translated and studied a relevant text dating from 1618. It describes stone transport as a major engineering project using ice sledges.

The ice sledges were most useful just after the winter solstice (December 21). This is a time when the average temperature in Beijing is 25 degrees Fahrenheit. This ensured that the ground would be hard enough to support the weight, and that workers could maintain an ice surface.

The construction team dug wells every 500 meters along the route. The wells provided water to spread on the roadbed to make an ice layer. The ice sledges were large wooden platforms matching the size of the stones (roughly 10 by 30 feet). Groups of men dragged them over the ice. Histories do not record how many men it took to move the ice sledges. However, 20,000 peasants participated in the entire transport job.

Science Speculation:  The researchers did more than just translate an old manuscript. They also studied data on ice sledges used today to transport mining equipment, to understand the friction of wood on ice.  They applied this knowledge to analyze the Chinese case to see whether the numbers were plausible.

Ice sledges move much more easily if there is a thin layer of water on top of the ice to reduce friction. However, the researchers calculated that a sledge being pulled at 8 cm per second (0.2 miles per hour) would not generate enough frictional heat to maintain a layer of water. Therefore, they believe that while some men were pulling the sledge, others were pouring water on the icy road just ahead of it to keep the interface lubricated.

This analysis doesn’t address the “start-up” problem:  Static friction is much greater than kinetic (moving) friction, so it’s hard to get the sledge moving to start with. Even worse, if you let the sledge stop, even for a moment, the under surface of the sledge will freeze solidly to the icy road. It took 28 days to make the journey from the quarry to the Forbidden City construction site. It’s likely that at least some pauses along the way were necessary.

The historical record does not reveal what the Ming Dynasty Chinese did to get around the freezing problem. The researchers assume that if workers had to pause en route, they rested sledges on planks or rollers. That would keep them from freezing to the ground. This appears to be standard procedure today when using ice sledges.

Ice sledges were an unusual choice for the Chinese compared with using wheeled carts. However, ice sledges have long been a workhorse means of transportation for some societies. The Inuit qamutiq and the Lapland ahkio are ice sledges which transport freight today. They incorporate sophisticated design principles and a deep understanding of how to move goods over ice.

Ice sledges are an example of the surprises that still await us when we look at the historical record. Have any historical discoveries particularly surprised you?